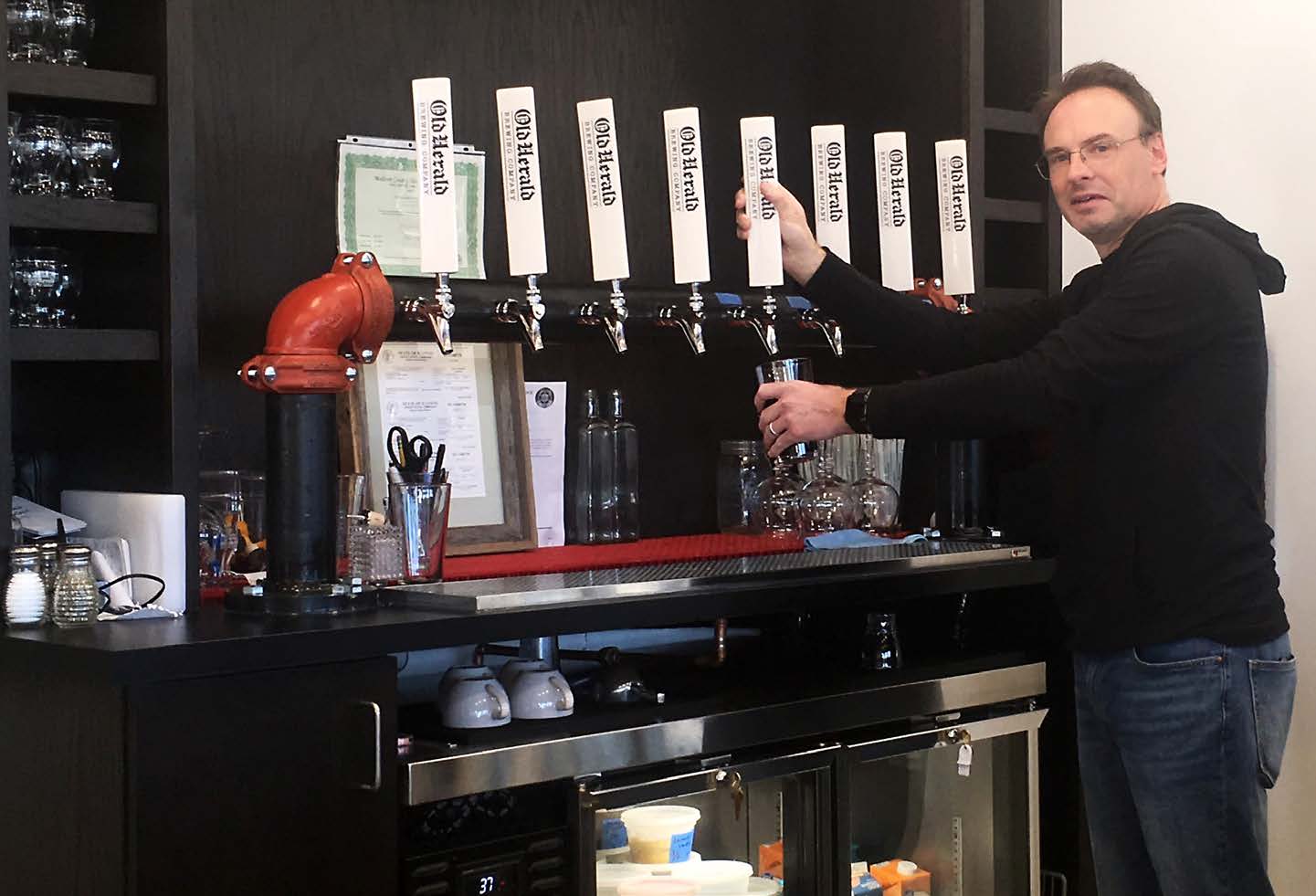 By DENNIS GRUBAUGH
When Derik and Whitney Reiser decided to turn the page, they opted for the local newspaper.
They bought the historic building that once housed the Collinsville Herald, transforming it cover to cover during a two-year, multi-million-dollar renovation.
The result is the Old Herald Brewery and Distillery, which opened Jan. 3 at 115 E. Clay St. in the heart of Uptown Collinsville.
The operation offers several styles of beers brewed in house as well as distilled spirits, such as gin, vodka and rum. Whiskey will be offered after it has been properly aged. A complete restaurant menu is offered for lunch and dinner.
The building, first constructed in 1924, sat vacant for most of the last 20 years, but Derik Reiser said the location was perfect for splitting up the brewing and distilling processes, which are highly regulated.
“We were interested in doing a family business and were also into home-brewing of beers since the early ’90s,” Derik Reiser said. “I got caught up in the craft spirits movement over the last 10 years.”
Collinsville didn’t have the kind of venue like the Reisers sought when they traveled, so the couple decided to start one.
They started doing their research about three years ago and set their sights on the Herald building two years ago, eventually purchasing it from a doctor in St. Louis, who had purchased it along the way but had not really done much with it.
“As soon as we walked into it, we realized it was perfect for what we wanted to do,” Reiser said. “We want this to be something the community is proud of. We’re in it for the long haul.”
The general contractor on the project was Highland-based Korte & Luitjohan Contractors. A number of other local companies were needed, including the Collinsville office of Volkert engineering.

From a compliance standpoint, the brewing and distilling cannot be comingled.  And the layout of the building, primarily concrete and steel, allowed for separation of the processes and support needed for the heavy equipment.
The distillery features a hybrid pot and column still, which allows for distilling a variety of spirits. Because clear liquors take less time, the cocktail menu right now is gin-, rum- and vodka-centric.
“We can do the traditional, pot-distilled whiskey, or we can do more refined products. The flagship right now is our gin. The whiskey is going to take a few years to age,” he said.
The business has about five full- and 45 part-time employees to staff six days a week. It’s closed on Mondays.
The beer list is a reminder of the building’s past — with names like Proofreader Pale Ale, Printer’s Ink, a dark ale, Late Edition, an IPA, and Miner’s Coalsch – a Kolsch-style beer that plays on Collinsville’s miner past.  Ten percent of the proceeds from sales of Miner’s Coalsch are going to the Miner’s Theatre restoration project in Collinsville.
The beer flows from vats that are located in the building’s basement — once the home of the newspaper morgue, where clips were buried. The 10-barrel brewhouse is capable of making about 300 gallons of beer at a time. The equipment all came from Wisconsin. Most of the beers are based on a German pilsner malt.
The Reisers founded their company as Ardent Spirits and will use the Ardent name in some of their marketing. The name stems from an old law in Collinsville that forced landowners to forfeit or sell property back to the city if they were found to be illegally producing “ardent spirits.” 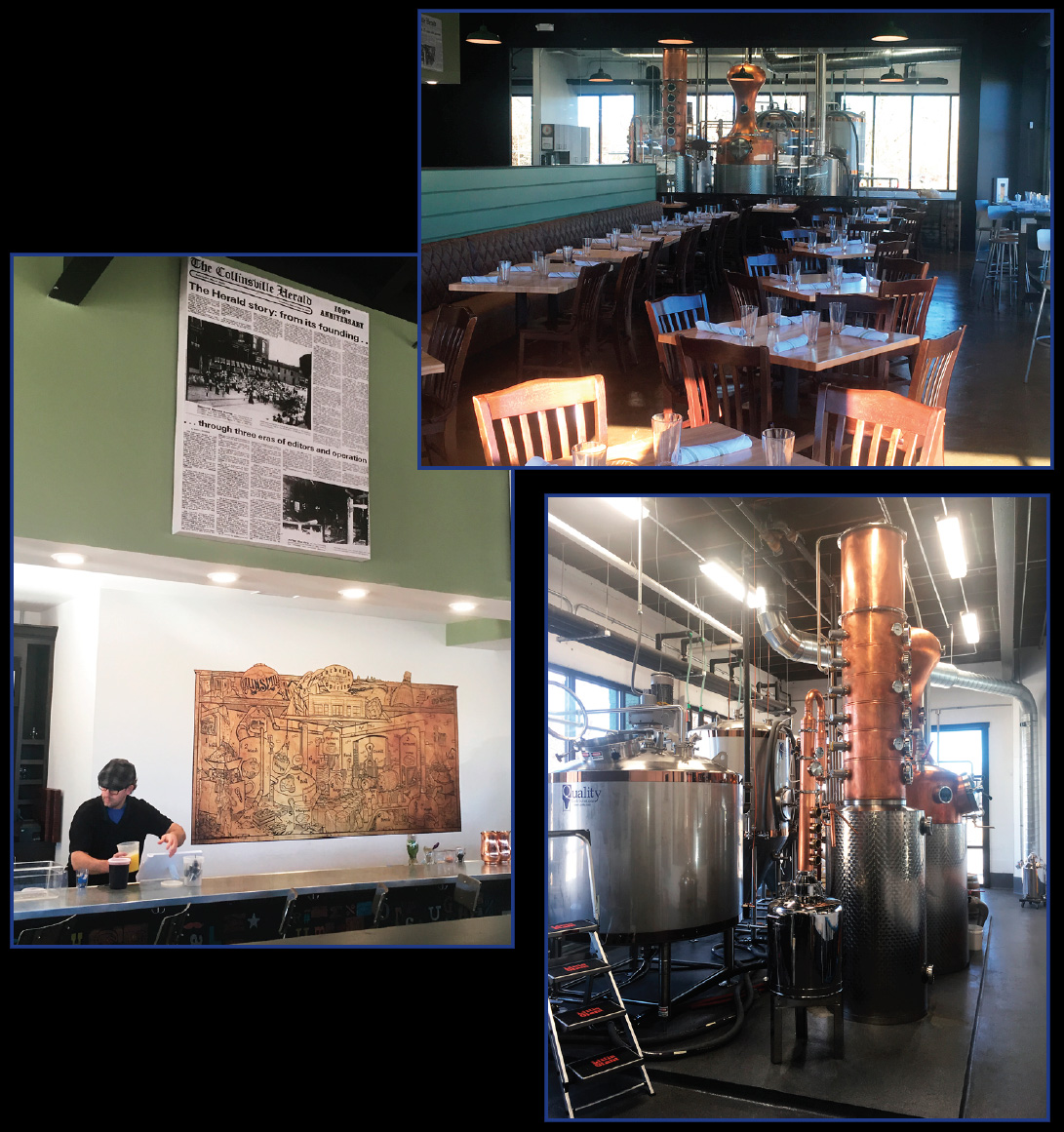 Many photos taken through the years by the Collinsville Herald were provided for décor to the Reisers by Kay Monroe, the daughter of the late, longtime editor of the Herald, Karl Monroe. Some of the front pages have been blown up and hang above the new bar.
Some newspaper remnants — an old press, an old negative camera the size of a man — can be found throughout the building.
The Reisers, who are originally from central Illinois, met while at Southern Illinois University Edwardsville. They’ve been in Collinsville since the late 1980s and well remember the building’s days as a newspaper.
The glass-enclosed distillery is located in the northeast corner of the first floor, in what used to be a production area of the newspaper. Meanwhile, the beer brewing takes place in a very clean, very open basement, the former site of warehousing and inserting.
The investment is close to $3 million, financed in part by a Small Business Administration loan and Best Home Town Bank in Collinsville. The city helped out through TIF funds.
“There was just so much infrastructure that had to be addressed,” Reiser said. “Before we could even start we had to replace an old asbestos roof.”
Only minimal work was needed in terms of the facade, painting and ceiling. The previous owner had replaced the glass blocks and put the storefront glass in. But a ton of effort was put into the rest of the building, which was basically gutted by the time the Reisers got to it.
The main dining area and bar seats around 125. There is also a lobbylike cocktail area where people can sit and drink, socialize or play board games. There is also a private event space that can accommodate groups of 50 or more.
A hallway adjacent to the event space is lined with reclaimed barn wood.
Reiser brings some of his own expertise to the distilling process. Leading up to opening, he studied with the Siebel Institute in Chicago, and the Moonshine University in Kentucky, both respected intuitions in the trade.
Because it is a longstanding tradition to name a still in honor of an important figure, Reiser asked Kay Monroe if she would mind. She happily complied.
“There’s still a Monroe presence in the building,” Reiser said.