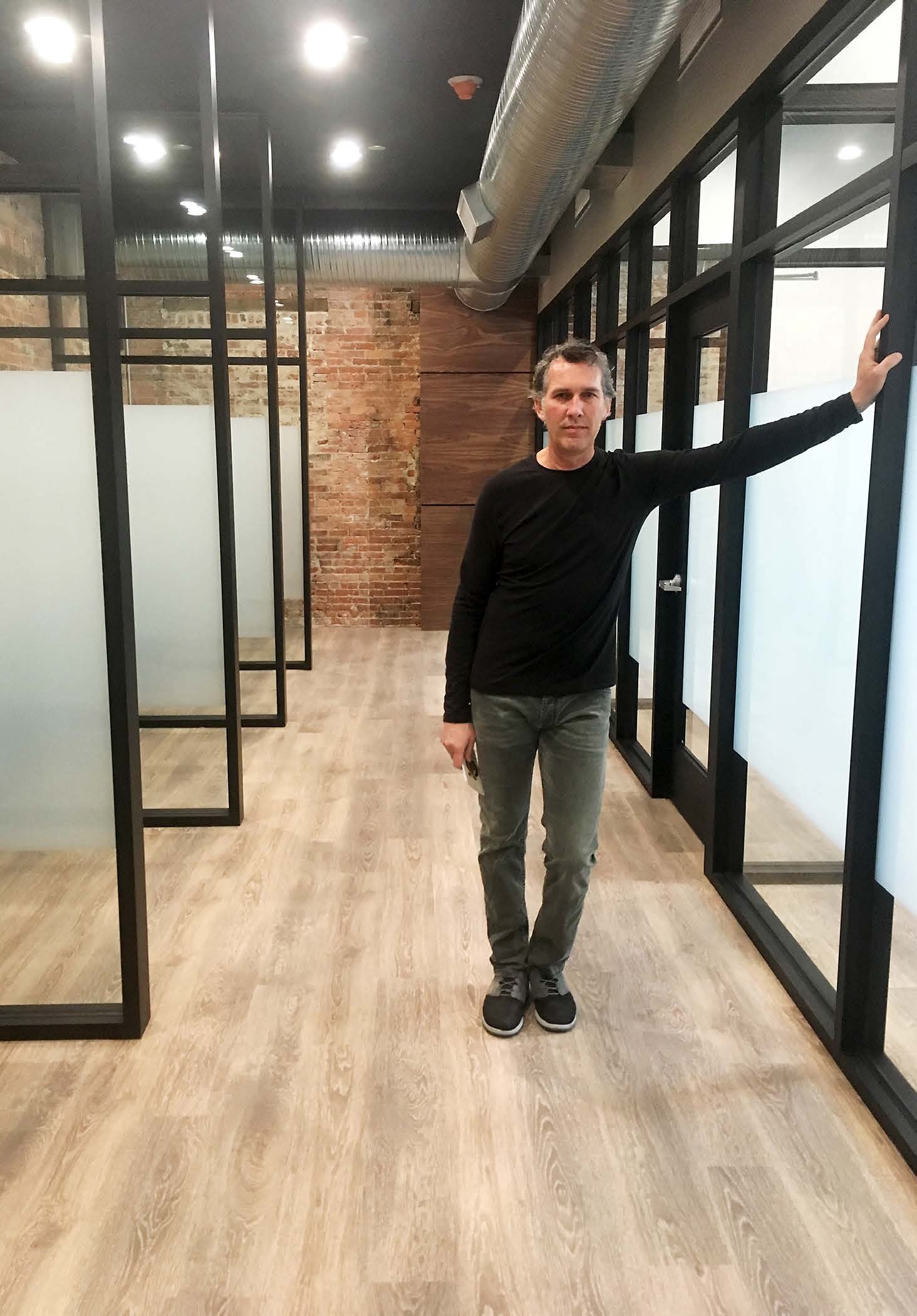 By DENNIS GRUBAUGH
Jay Beard didn’t envision a home away from home for local business people when he purchased a downtown Edwardsville building, but the subsequent renovation process nudged him toward the growing field of coworking space.
Now, he’s all in. The result, after what will be more than a million-dollar investment and months of revitalization, is The Lodge, which opens in February at 231 N. Main St.
The structure is one of Edwardsville’s oldest buildings, known to old timers as the former home of Moose Lodge 1561, an organization that relocated long ago. Now, the building is going to be home of a different kind of camaraderie — among people seeking to build their businesses and networks.
The second floor of the building contains a new co-working space and small private or open offices, most of which have already been accounted for, simply through word of mouth, Beard said.

Beard, who has lived in Edwardsville the last 30 years, is a longtime entrepreneur. He also owns Goshen Coffee Co. and Carrington Homes as well as other development interests.
When he bought the building last year, he intended it to be on spec, figuring he would lease out spaces to others in a stretch of town where office space is not abundant.
He purchased the building from Frank Castellano, whose family had the site for years.
The upper portion hadn’t been touched in at least 20 years, Beard said, and was last used as a dance studio. In the same building, but on the main floor is Sacred Grounds, a popular coffee shop. Next door is a lobby area through which people using the coworking space will enter and take an elevator upstairs.
“By the time we’re all done with this (the second floor) we’ll probably put in about a million dollars, but then we have areas for expansion,” he said. “We have 3,000 square feet (now). We have 2,200 square feet for future expansion of this facility (the workshare space) and 1,200 square feet of retail right below us at street level (the lobby).”
The additional 2,200 square feet will also be used for event space.
Years ago, the site actually was two adjacent buildings. When the Moose lodge took it over, its members knocked out a central wall and made it a common structure, with a new façade on the front.
Fast forward about 60 years and Beard combined some facade grant money from the city with some of his own to again redo the outside of the building, making it one of the most updated buildings in downtown. A ceremonial Moose emblem was placed on the front of the building in honor of the history.
“Everybody has been so complimentary, and the city has just bent over backwards for me to make this so easy,” he said. “They helped me get this project done.”
Renovations began last summer.
“Let me say I’m grateful for all the law offices in downtown Edwardsville. They speak to the economy of business down here. People think, ‘Oh, it’s another law office,’ because that’s what can afford to be down here. But what I want to do is provide a beautiful office environment for people that work from home, or work out of coffeeshops, or are young entrepreneurs.”
The floor contains a large, glass-enclosed conference room, seven private offices and several so-called private nooks, like cubicles. A range of memberships dictate access — $129 for a general members, $400 for nooks, and anywhere from $600 to $1,500 for private offices.
Judging from those who have committed to memberships so far, there is quite a diverse range of avocations, which is one of the benefits of the space. One person is a graphic designer, another does webinars, another handles utility company work. There is also a financial planner, a freelance writer, a Realtor, an event planner and others.
“What we’re trying to get is people who collaborate together,” Beard said. He related a story of how one member helped another with a recommendation on website assistance.
Members have private access, allowed through phone apps. Anyone wishing to visit can be allowed in through a downstairs communication system.
Once in the space, members have a lot of flexibility. There is a lounging area; a lengthy bar with both coffee and beer taps; TVs for presentations; a shared library; charging ports; a copying center; monthly happy hours with speakers; and monthly breakfasts. There is parking in back and new stairs leading into the building. There is also a private phone booth. Those members who don’t have an office can step into the booth to discreetly conduct business.
One wall of the conference room is a giant white board and magnet surface. The conference table is custom-made from walnut.
“We went out of our way to tear this thing down to its bones,” he said. The work was readily noticeable each time someone entered Artisan 222 Bakery and Cafe across the street, and several memberships resulted from that awareness.
The accoutrements bely the original plan. Beard admits he wasn’t thinking upscale, co-working space at the beginning as much as just office and retail. But the more he got into the renovation, the more he became convinced of what would work.
“I like to travel a lot, and this is something they’ve done in big cities all over the world in the last six years. Nobody would think to do it in this small of a town, but this small town has so many entrepreneurs and freelancers. And big-city types will use this. We’re not a nobody town, we’re a happening place,” he said.
He added: “Is this a big risk? Absolutely, but that’s what I’ve been doing in this town now for 30 years.”
Members will always have access, 24/7, 365 days a year. There are security cameras everywhere for safety.
“And you don’t have to come here to work. Say, you found a good book — sit down on the sofa and read for a while,” he said
Beard says he has a few members who are studying to further their careers.
The surroundings are impressive, and they are intended to be. The businessman trying to make his mark has the potential to influence a client, Beard said. It’s also a great way to get away from the distractions of a home setting.
“You’re young, you’ve got two kids running around, the dog is barking in the background — there are times when you need to have that separation,” he said.
The ages of the member range from 21 to around 70, and it’s a mix ready made for intergenerational networking, he said.
Memberships formally began Feb. 1. Beard can be reached for more information at info@thelodgeworks.com. 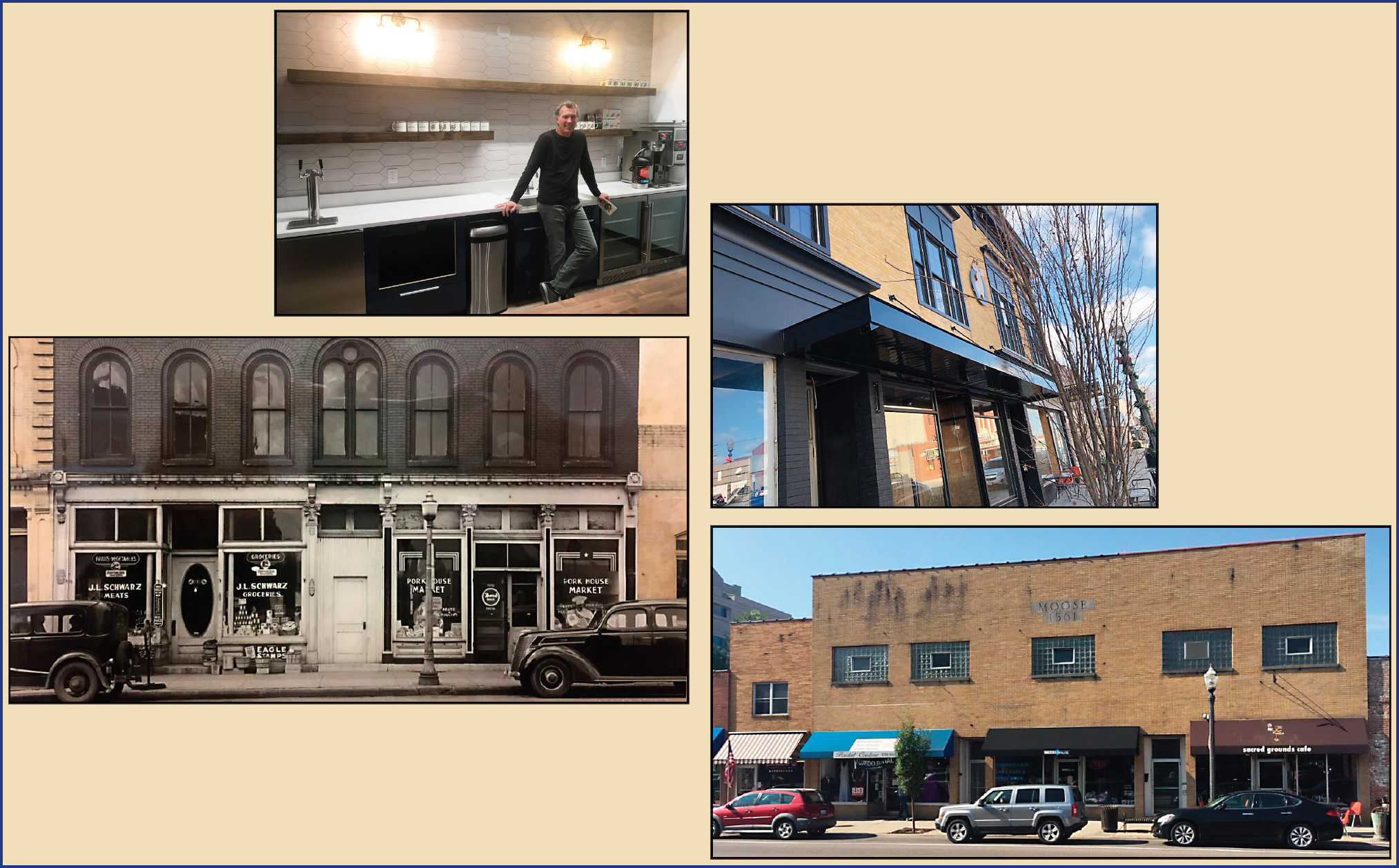