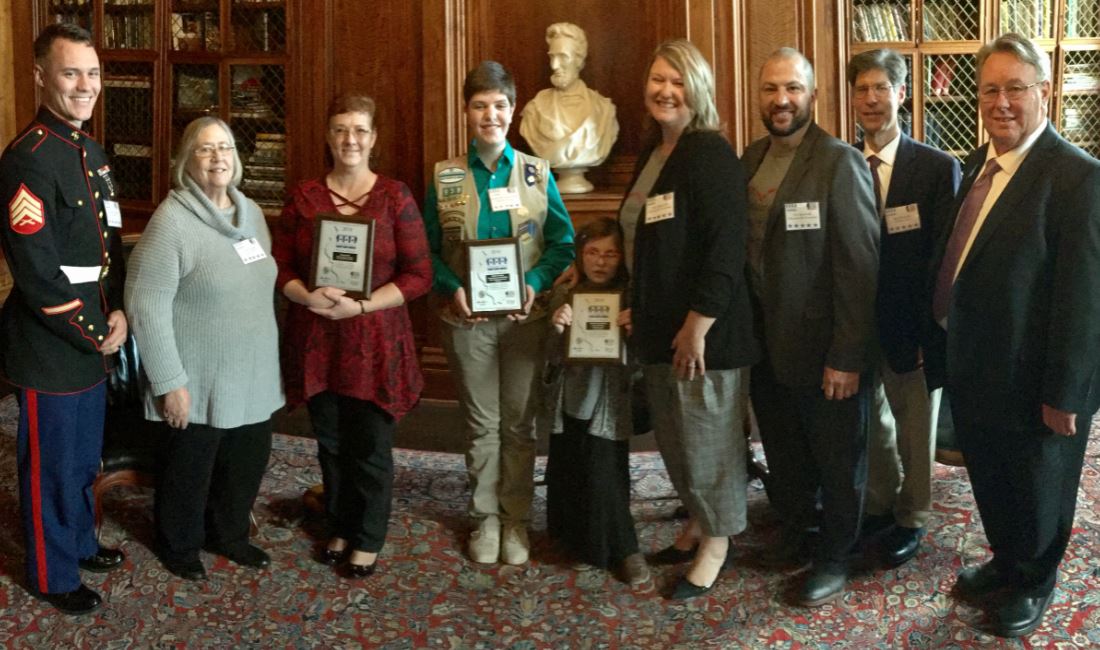 Katharine Housewright of St. Jacob, Makenzie Keiser of Edwardsville and Kelan Masinelli Edwardsville received awards during a reception held at the state’s executive mansion. The awards ceremony acknowledged 23 projects across the state that served to enhance the lives of those living within Illinois communities.

Madison County Board Chairman Kurt Prenzler attended the event and said it was remarkable that three of the winners were from Madison County.

“We should be proud,” Prenzler said. “It was unique that three individuals were from our county, but even more so they were all young people.”

Prenzler said that it shows what youth can do to make a difference in their communities.

Since 1983, the Governor’s Hometown Awards has given formal recognition to those who contributed to projects that improved their community’s quality of life. These projects are sponsored by local units of government that had strong volunteer support, met a need, and made a definitive impact, thereby generating a positive outcome in the community and by extension, the state. The program is administered by the Serve Illinois Commission, the Governor’s Commission on Volunteerism and Community Service.

Besides the Hometown Awards, both Housewright and Keiser achieved their Girl Scout Gold Award, which is the highest award a Girl Scout can achieve, with their projects.

Housewright’s project was “Beautification of Triad Middle School Student Courtyard,” She painted a U.S. flag and preamble to the Constitution in the courtyard, which had not seen updates since being built during the 1960s. Housewright also enlisted the help of other students by promoting the project with social media.

Keiser ‘s project “Growing with the Garden” helped to teach area children how to grow vegetable gardens with the YMCA Early Childhood Development Center in Edwardsville. She worked with YMCA staff to design and build three raised garden beds at the facilities playground.

Riley Masinelli accepted the award on behalf of brother, who was the ceremony’s youngest award winner at age 11. The young boy’s health has kept him from participating in most childhood activities, including playing with friends in the park.

The Make-a-Wish Foundation granted Kelan his request for a wheelchair accessible swing at the Boundless Playground at Edwardsville Township Park. The community rallied behind him, volunteering their time and money to raise the additional funds needed to complete the project.

Edwardsville Township Supervisor Fred Schulte, who also attended the ceremony, said it was an honor Kelan’s project was selected among the worthy contenders for this year’s awards.

“Most of all, we’re honored that Kelan and his family chose Edwardsville Township Community Park for this project,” Schulte said.

Visit www2.illinois.gov.for more information on all the Hometown Award winners.

PHOTO:  Madison County Board Chairman Kurt Prenzler, second from right, and Edwardsville Township Supervisor Fred Schulte, right, stand with the recipients and their families or representatives following the 35th annual Illinois Governor’s Hometown Awards in Springfield. Three youths from Madison County were recognized during the ceremony at the Governor’s Mansion on Tuesday.