By ALAN J. ORTBALS
Alton will step into the spotlight on Oct. 4 when streaming service Hulu kicks off the third season of its Small Business Revolution – Main Street series.
The Great Rivers and Routes Tourism Bureau will be holding a launch party at the WOW Furnishings and Event Center at 515 E. Third St. that night. The show is hosted by Amanda Brinkman and Ty Pennington and airs on Hulu and YouTube.
The program is sponsored by the Deluxe Corp. Deluxe was founded in 1915 as Deluxe Check Printers. It provides personalized products and services to small businesses, financial institutions and individuals. Deluxe, which calls itself a champion of small business for more than 100 years, created the Small Business Revolution – Main Street to help small businesses and the small towns they call home. Each year the company selects one town and six businesses within that town to receive $500,000 in grant money and the assistance of business consultants. Previous winners include Wabash, Ind., and Bristol Borough, Pa.
Alton was among thousands of communities across the United States nominated last year to be the focus of the show’s third season. Alton made the first cut last December when the Top 20 communities were named and survived the second cut this past January when the list was trimmed to 10. Each of those towns were visited by show representatives to get a personal tour.
Representatives of Small Business Revolution – Main Street visited Alton Jan. 18-19, interviewing small-business owners, touring the town and speaking to city officials about the community. While in town, the show’s team was treated to a reception at Old Bakery Beer Company.
Following that visit, the list of 10 hopefuls was trimmed down to five and Alton once again made the cut along with Bastrop, Texas, Amesbury, Mass., Siloam Springs, Ark., and Martinez, Calif.
Alton was named the winner of the Small Business Revolution’s Main Street contest on Feb. 27 after national voting catapulted the city into the winner’s seat. That achievement garnered a $500,000 downtown revitalization grant that was spread over six businesses as well as the city itself.
“They just fell in love with Alton,” said Brett Stawar, president and CEO of the Great Rivers and Routes Tourism Bureau. “That was evident. I’ll never forget the day we took them into the Post Commons — the old post office now turned coffee shop — and they about fell over. Their jaws dropped to the floor. They’re from Minneapolis, which is a pretty hip place, but they were just amazed at what Alton had to offer.”
Stawar said that Alton was the largest community that show promoters had ever worked with and they found it a bit challenging to connect the city’s various business districts rather than focus on just one. They also wanted to select a broad range of business types, Stawar added.
The businesses selected by Deluxe were: 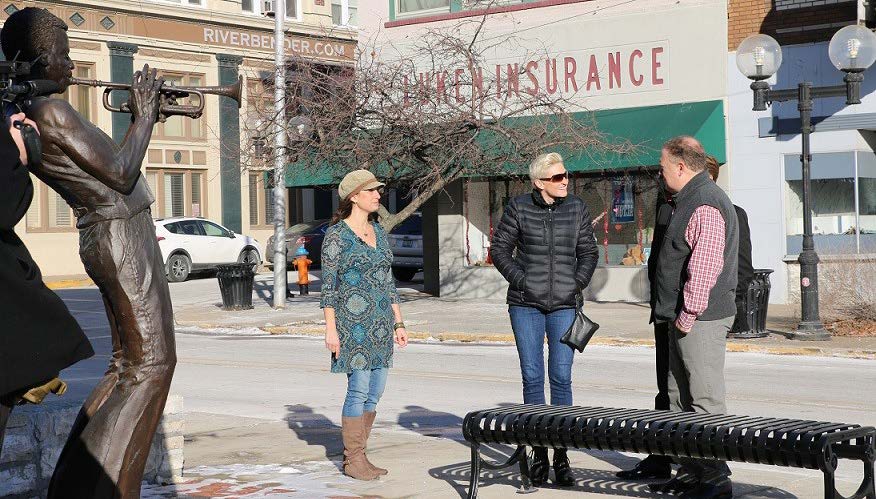 Those businesses each received the help of a business mentor specially selected for them in addition to monetary assistance. One of those businesses was Morrison’s Irish Pub.
Morrison’s was opened for business in July 2015 by Katie Thayer (now VanKirk), her husband, George Thayer, along with her mother, Mary Morrison, and aunt, Lisa Morrison. Kim Hartman who, according to VanKirk owns about nine restaurants in Minneapolis, was assigned to be their mentor. Among her suggestions were how to better display the 60 different Irish whiskeys that Morrison’s offers as well as menu changes to attract more-*/=5 lunch patrons.
“It was an amazing process,” VanKirk said. “They really focus and pinpoint things that can help your business. But it’s always the business owner’s decision to implement those suggestions or not.”
Although taping for the show just wrapped up earlier this summer, VanKirk said she could already see improvement.
“We are definitely seeing an increase in sales,” she said.
In addition to the assistance to the six businesses, the city also received funds from Deluxe that were used for banners, lights, signage and a wall mural.
“It’s been a whirlwind,” said Stawar. “A year ago, we had no idea what we were going to go through. It was a heavy load on the bureau to pull it all together but it was the region that pushed us over the top to win the vote. It was a phenomenal experience, seeing everybody pulling together and getting excited again about the possibilities that Alton holds.”