Gov. Bruce Rauner has told the newly appointed Japan ambassador to the U.S. that Illinois is eager to expand its job-creating partnership with Japan and those businesses operating in Illinois.

The governor and Ambassador Shinsuke J. Sugiyama met Tuesday in Schaumburg, where the ambassador is visiting as part of a “Grassroots Caravan” to tour company facilities, see the latest in manufacturing innovations, and learn more about the Illinois workforce. 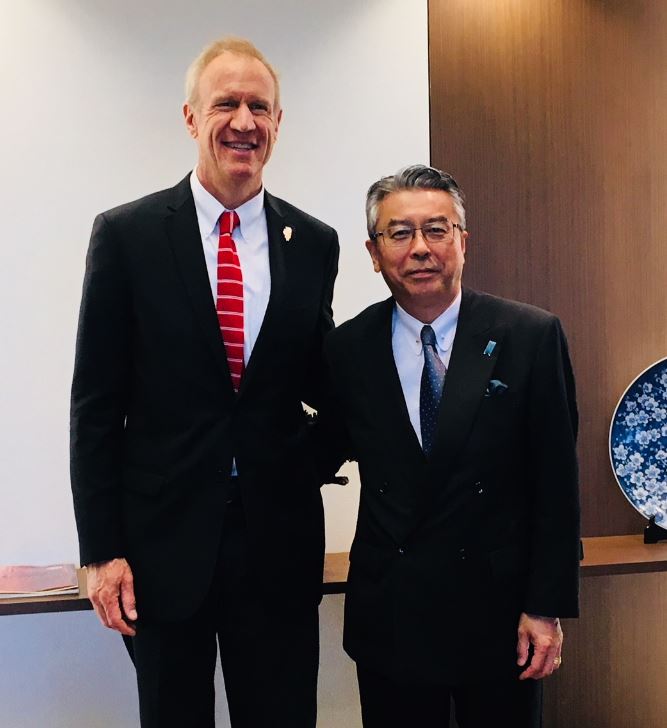 “Our relationship with Japan is so important to the Illinois economy,” Rauner said. “More than 630 Japanese companies operate within our borders today and they provide employment for 46,690 Illinois workers. For us, today’s meeting reinforces the benefits our state derives from foreign direct investment. For Ambassador Sugiyama, we hope it helps confirm our commitment to helping Japanese companies grow here in Illinois.”

Rauner and Sugiyama toured Amada America Inc.’s 133,000-square-foot facility to see the company’s industry leading work in manufacturing automation and robotics. Along with a delegation of state and local officials, Rauner welcomed Sugiyama on his first official visit to the state of Illinois.

“Seeing is believing,” Sugiyama said. “Participating in the Grassroots Caravan, I understand that it is something more than just deepening our economic relationship, but also brings people closer together.”

“The Illinois Manufacturers’ Association is proud to be part of the delegation hosting new Japanese Ambassador Shinsuke Sugiyama and Consul General Naoki Ito in Schaumburg,” said Mark Denzler, vice president and COO of the manufacturers’ association. “We had a great visit at Amada America Inc.”
“I’m honored that both the ambassador and the governor are here,” Consul General Ito added. “The importance of Japan’s business relationship with Schaumburg and Illinois is on full display today. The greater Schaumburg area really stands out in our economic partnership.”

“The Japanese Chamber of Commerce and Industry of Chicago, with more than 500 corporate and individual members, continuously strives for a further collaboration with the State of Illinois to better serve the people and play a key role in strengthening the relationship between the United States and Japan,” said Tetsuro Mitani, executive director of the Japanese Chamber of Commerce of Chicago.