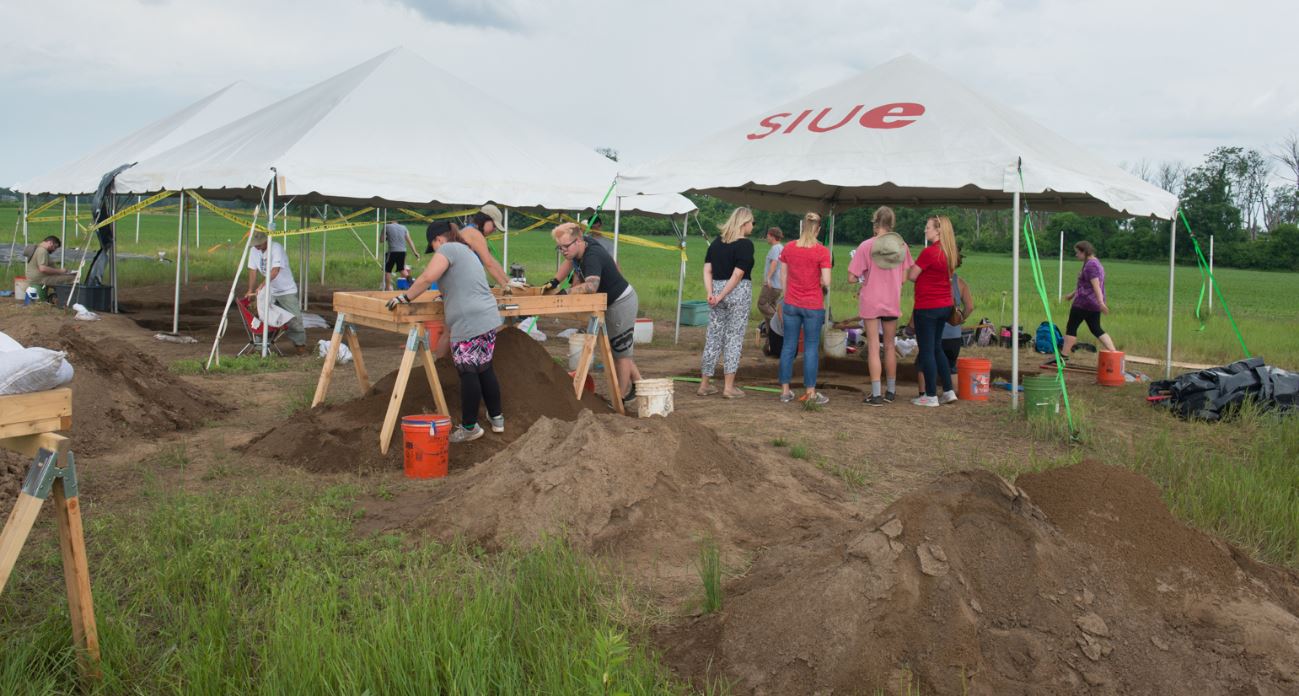 On the west side of Southern Illinois University Edwardsville’s campus, near Ralph Korte Stadium at the Gehring site (11MS99), 16 undergraduate students and several faculty members from the College of Arts and Sciences’ Department of Anthropology have uncovered a 1,000-year-old home from the Mississippian period.

The students are participating in an eight-week archaeological field school led by Julie Zimmermann, PhD, professor of anthropology, which began May 14. They’ve spent the last several weeks carefully peeling back two-years’ worth of preserved work that had been covered with black plastic and meticulously dredging through backfill.

“Once we peeled everything back, everyone said, ‘that’s a house?’” said Zimmermann. “The Mississippian people would build semi-subterranean structures, and at the bottom of these holes were wall trenches.

“Because this site was so heavily plowed since the 1970s for horseradish and other agriculture, most of that Mississippian ground is gone, and what remains is the foundation of the home.”

Around AD 1100-1200, during the “golden age” of Cahokia, the Mississippian people settled east of the Mississippi River from modern St. Louis, including part of SIUE’s campus. This region was an attractive place to live, as it was a hub for farming, trade and ritual.

Clara Riechmann, a senior anthropology student from Valmeyer, said her colleagues assumed families of four or more would quickly work to build their homes, dig trench-like holes and slide in walls one at a time. Along with the other students, she is working to collect plant and soil samples, and search for Mississippian or Late and Middle Woodland-era artifacts.

Like many freshmen, Riechmann came to SIUE with little idea of what to study. After a visit to the Career Development Center, her advisor sent her to meet with Zimmermann.

Inspired by her true calling, Riechmann hopes to work in cultural resource management and geographic information systems anthropology following graduation.
“It’s incredibly exciting to be out in the field working in a way that I hope to be doing one day in my career, rather than only sitting in a classroom,” said Riechmann.
Along with the foundation of the 1,000-year-old Mississippian home, the field school students and faculty researchers have also found shards of Mississippian, and Middle and Late Woodland-era pottery and arrowheads. These findings, along with the soil and plant samples, will be taken to the SIUE Anthropology Laboratory on campus for analysis upon the field school’s conclusion.

“Our campus is covered in this rich cultural history, and I’m so proud that we can preserve it for the next generation,” explained Riechmann.

PHOTOS: Tents are strategically placed at the Gehring Site on campus where the archaeological field school is hard at work uncovering history this summer.