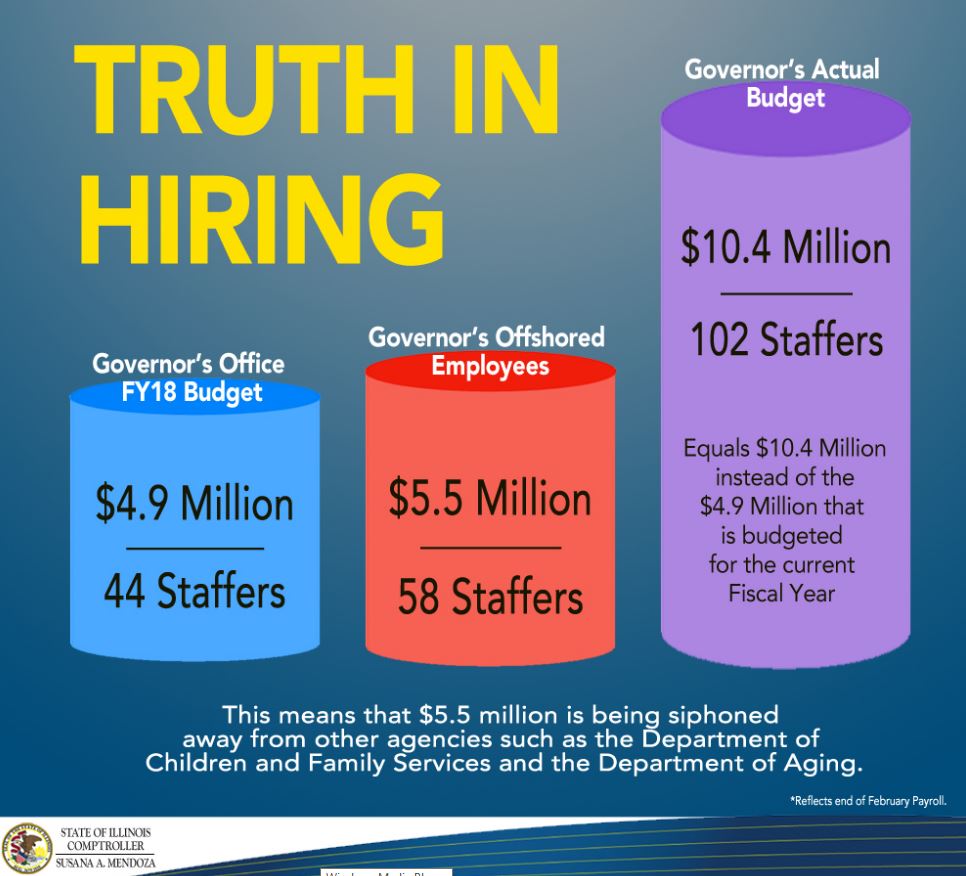 The Illinois Senate today approved the Truth in Hiring Act with bipartisan support. The accountability and transparency measure, sponsored by Manar in the Senate, will be sent to the governor’s desk.

“Offshoring didn’t start under this governor’s watch, but certainly he can be the governor who puts a stop to it,” Manar said.

Their salaries will be counted in the governor’s budget and will not be pulled from agencies that are supposed to protect children and the elderly or put state troopers out patrolling highways.

Nearly 60 percent of employees working for Rauner’s office currently are paid by state agencies with funds intended for priorities such as economic development, public safety and child protection.

Offshoring has been utilized by Illinois governors, Democratic and Republican, for years to make it appear their office budgets are smaller than they actually are. Examples include paying an education advisor to the governor $250,000 from the Department of Human Services budget or a deputy chief of staff to the governor $140,000 from the Illinois State Police budget.

The measure was an initiative of Illinois Comptroller Susana Mendoza. It was approved with no opposition in the House.

“Signing the Truth in Hiring Act shouldn’t require much soul-searching by Gov. Rauner when it lands on his desk,” Manar said. “I urge him to enact it and join lawmakers of both parties and the comptroller in claiming a victory for Illinois taxpayers.”

“With the state in such dire shape and state agencies cutting services, this bill is necessary to ensure that government spending is transparent and that critical, scarce funding for vital services isn’t misused to pay for the governor’s administrative expenses,” she said. “For years, Illinois governors have been hiding the size of their true budgets by paying staffers out of the budgets of other state agencies and using funds intended to help children in need, veterans and the elderly. This legislation puts an end to that irresponsible practice and ensures the greatest transparency in state spending.”