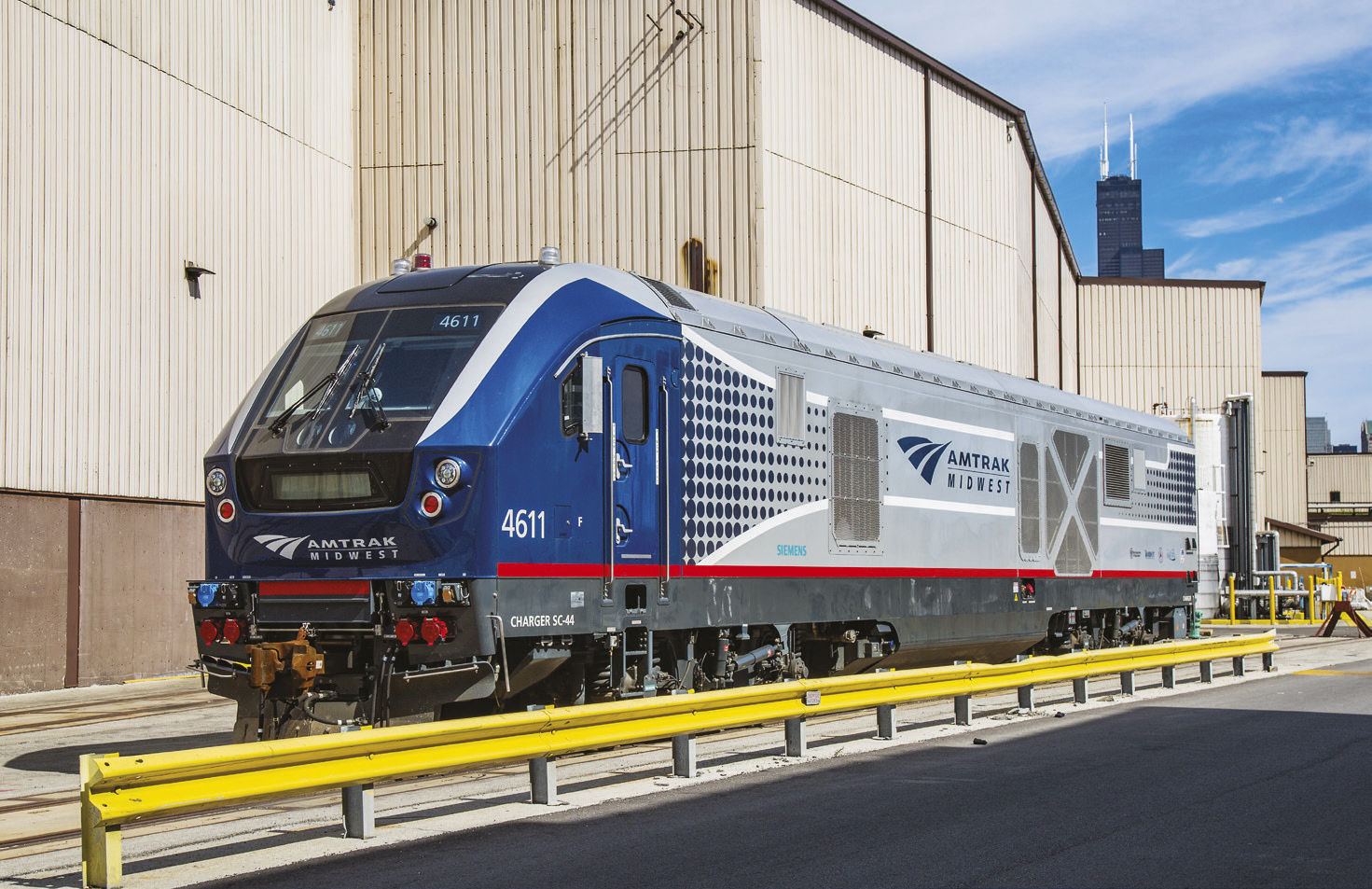 By ALAN J. ORTBALS
The $1.5 billion high speed rail project between St. Louis and Chicago is substantially complete, and new locomotives will be powering the Lincoln Service within the next 30 days. But they’ll be pulling passenger cars that are nearly a half century old.
New cars won’t be received until sometime in 2020, according to Kelsea Gurski, spokesperson for the Illinois Department of Transportation.
That’s because the contract with Japanese manufacturer Nippon Sharyo, Ltd. to build the cars was cancelled after more than five years with no useable cars being produced.
Several states, including Illinois, banded together and, led by the California Department of Transportation (Caltrans), entered into a $352 million contract with Nippon Sharyo to build and deliver 130 passenger rail cars — 42 for California and 88 for the Midwest in 2012.
Nippon Sharyo opened a new U.S. headquarters and built a $35 million passenger rail car plant in Rochelle, Ill., about 80 miles west of Chicago. The company received more than $10 million in state and local incentives including tax credits and infrastructure improvements.
According to a report by the Chicago Tribune, the Nippon Sharyo plant was fined for violations by the U.S. Occupational Safety and Health Administration and was unable to produce a car that could pass safety inspections. According to the Tribune, those problems resulted in large layoffs at the plant with the workforce plunging from a high of 694 in 2015 to just 54 last October.
Following cancellation of the Nippon Sharyo contract, Caltrans announced on Nov. 8 of last year that a new contract had been signed with the Sumitomo Corporation of Americas (Sumitomo) which, along with Siemens USA, will produce 137 rail cars — 48 for California and 88 for the Midwest — under a $137 million contract.
“Siemens is excited to work with Sumitomo in their partnership with Caltrans and the IDOT by building 137 new passenger coaches at our Sacramento, Calif., rail manufacturing hub,” said Michael Cahill, president of Siemens Rolling Stock. “These coaches will use the industry’s latest, proven rail technology to provide passengers with a safe, modern and highly comfortable ride.”
The cars will be owned by the state and leased to Amtrak. Siemens is expected to begin production later this year with delivery to IDOT sometime in 2020.
According to a Caltrans press release, the new cars will come with spacious, modern interiors that focus on passenger comfort and convenience, such as Wi-Fi, spacious seats with convenient power outlets, large windows with great views for all passengers, bike racks, overhead luggage storage, work tables, state-of-the-art restrooms with touchless controls and full ADA accessibility throughout the cars.

Illinois has already received 12 of the new locomotives that are being put into service on Amtrak routes in Wisconsin, Michigan and Missouri, including the Illinois Zephyr/Carl Sandburg service between Chicago and Quincy, the Hiawatha service between Chicago and Milwaukee, and the Saluki/Illini service between Chicago and Carbondale. The Lincoln Service between Chicago and St. Louis will soon join that list.
“We are proud to have led the effort to bring these attractive, modern locomotives to Illinois and our other state partners,” Illinois Transportation Secretary Randy Blankenhorn said. “Passenger rail customers will benefit the most by enjoying a ride that’s more reliable and more comfortable as they travel between our state’s great communities, institutions and attractions.”
Approximately 2.6 million passengers ride Amtrak in the Midwest each year, with more than a million of those riders in the hub state of Illinois. The new fleet of locomotives, which will be owned by the states and leased to Amtrak, is branded “Amtrak Midwest.”
“Our individual Amtrak Midwest routes are made even stronger by being a part of a network of connecting trains, stations and reservation systems, which are a product of our state partners working together under the Amtrak umbrella,” Amtrak Senior Director Michael Franke said. “These locomotives will power that Amtrak Midwest brand, bringing even better service to our customers.”
The Siemens new California fleet offers numerous advantages over the locomotives currently used by Amtrak, such as lower maintenance costs, reduced fuel consumption and quieter operation. The locomotives will be able to operate at speeds up to 125 mph, with faster acceleration and braking for better on-time reliability. They meet all of the latest safety regulations and feature better traction for improved performance.
They also are the first higher-speed passenger locomotives to meet the highest federal environmental standards, meaning a 90 percent reduction in emissions and a two-thirds reduction in fuel consumption compared to the previous locomotives that are more than 20 years old.
Purchased through $216.5 million in federal funds, the locomotives are just one part of a larger effort to improve passenger rail service in Illinois and the Midwest. Foremost among these are the improvements being made on the Chicago-to-St. Louis corridor, which includes rebuilt tracks, new or upgraded stations in six communities, and crossing and signal improvements that will lead to improved safety, reliability, speed and convenience.
The new Alton Amtrak station opened in September.

POINT: Are tax cuts the answer to long-term economic growth?

COUNTERPOINT: Are tax cuts the answer to long-term economic growth?