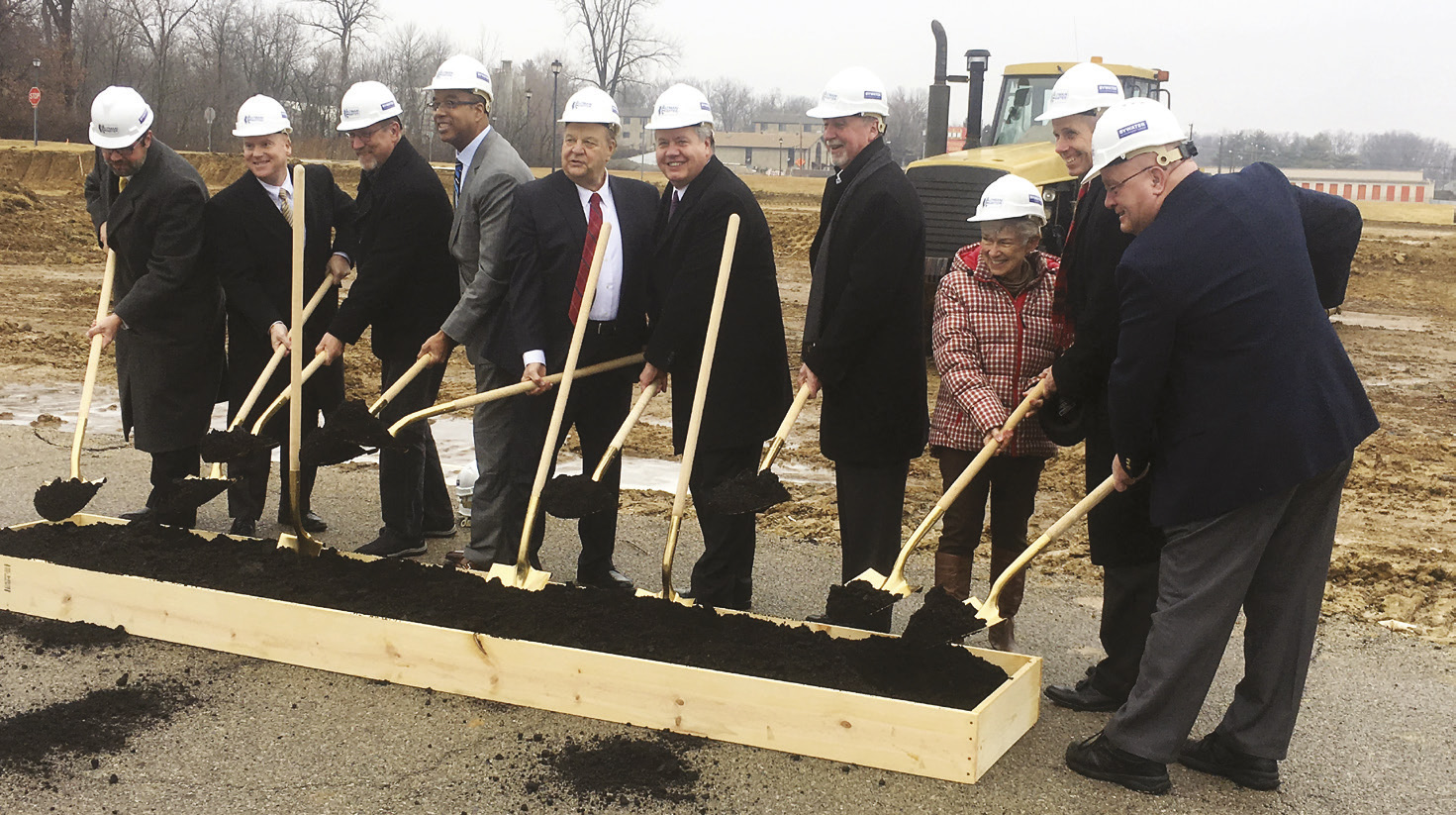 By DENNIS GRUBAUGH
Work has begun on the Metro East’s second transit-oriented senior apartment complex, the $10.9 million Metro Landing of Swansea, which officials hope becomes a catalyst for more development.
Ground was broken last month at the Swansea MetroLink Station. The project is a partnership of Southwestern Illinois Development Authority, Bywater Development Group and Bi-State Development.
SWIDA and Bywater, which are jointly developing the project, secured the majority of the financing from the Illinois Housing Development Authority, with additional construction financing provided by PNC Bank. Other support comes from the Illinois Department of Commerce and Economic Opportunity and Ameren, along with the St. Clair County Intergovernmental Grants Department.
The centerpiece of the project is a three-story building with 62 affordable one- and two-bedroom apartments for older adults seeking an independent lifestyle. Because it is located next to the MetroLink Station, residents will have transportation options via MetroLink and MetroBus to get to restaurants, retail, entertainment venues, recreational locations, employment centers, and medical facilities throughout the region. Bi-State Development’s public transportation system includes an 87-vehicle, 46-mile MetroLink light rail system and a 400 MetroBus vehicle fleet that operates on 83 MetroBus routes in Illinois and Missouri
The station is also located on the MetroBikeLink trail. The station is just off Fullerton Road, between Illinois Routes 161 and 159.
Bywater’s principals are Aaron Burnett and David Dodson, who were formerly associated with Rise Community Development, a nonprofit behind the construction of Emerald Ridge, a group of 46 modern homes built on the old defense housing area of East Alton — also with the help of Illinois Housing Authority tax credits.
“Metro Landing of Swansea will serve as a model for transit-oriented senior housing that creates both a positive impact on the community and an ideal living environment for its residents,” said Burnett, president of Bywater. “It is reflective of a very strong and effective public/private partnership and our organization is honored to be a part of this collective effort.”
Mayor Mike Leopold said he expects the project to be a catalyst, noting that numerous inquiries have been made about other potential development in the Metro Landing area.
Speaking at the groundbreaking event, SWIDA Chairman James Nations said the project is “truly an example of how public and private partnerships, coupled with broad community support, can lead to a significant community benefit.”
Mike Lundy, executive director of SWIDA, said the project has been in the works for around two years. A variety of funding sources are being used.
“I call it an Irish stew. You can use as many ingredients as you want and it still tastes good,” he said.
About 80 percent of the funding is provided through tax credits by the Illinois Housing Development Authority.
Since 1967, IHDA, a self-supporting state agency, has financed the creation and preservation of around 55,000 affordable housing units across the state, said Mary Kane, an IHDA board member who through the years has championed use of funds in Downstate Illinois.
Lundy said SWIDA made application to IHDA, didn’t get the Swansea project greenlight the first time and reapplied.

“That’s not uncommon,” he said. “IHDA gets 40, 80 maybe even 100 applications a year from throughout the state. It’s a very competitive process.”
SWIDA had just been coming off the East Alton project in 2016, and SWIDA board Chairman Nations and the board wanted to pursue more housing developments.
“I started looking for sites, and I found the site there (at Swansea). I reached out to John Langa at Bi-State and asked what they intended to do with that site,” Lundy said. From there he talked to two former mayors of Swansea and enlisted the city’s support. Leopold, the third mayor to become involved, was elected in April.
“When you put in an application with IHDA you want to score with the amenities — pharmacies, grocery stores, doctors’ offices. All these things you want to have as close as possible.” MetroLink makes that access possible, he said, mentioning how residents can also reach hospitals on both sides of the river.
Lundy said he, too, expects more development will follow when Metro Landing of Swansea is complete.
“A lot of times, a developer sees something coming out of the ground he wants to be out there, too,” he said.
“We’re excited about it, the city’s excited about it. For me, a year can’t go by fast enough.”
This is the second project done in association with a transit station in this region; the first is Parsons Place in the Emerson Park area of East St. Louis. The $23 million project featuring 174 one-, two- and three-bedroom apartment suites opened in 1999.
SWIDA had loans involved in that project as well, Lundy said.
U.S. Sen. Dick Durbin, D-Illinois, played a key role in securing support from HUD for the Swansea project. He was among those on hand to celebrate the official groundbreaking.
Durbin said he was a Congressman representing central Illinois around 30 years ago when Richard Gephardt, a Congressman from Missouri, came to him about supporting development of a light rail system serving St. Louis and just reaching into Illinois via the Eads Bridge. Durbin said he has supported the project in all the time since.
Extensions now take MetroLink all the way to Scott Air Force Base. In a survey a few years ago, MetroLink was deemed by those participating to be the most significant thing to happen to the St. Louis region, he said.
“People understand that transportation is the future, linking up people in every direction,” he said.
The Swansea project will help revitalize the community and provide high-quality, affordable housing that allows active seniors to live more independently,” Durbin said.
St. Louis-based Altman Charter is serving as general contractor. The project is scheduled for completion in spring of 2019.  Chicago-based Worn Jerabek Wiltse Architects is the architect. The Southwestern Illinois Development Authority promotes and enhances economic development within the counties of Bond, Clinton, Madison and St. Clair in Illinois.

POINT: Are tax cuts the answer to long-term economic growth?

COUNTERPOINT: Are tax cuts the answer to long-term economic growth?