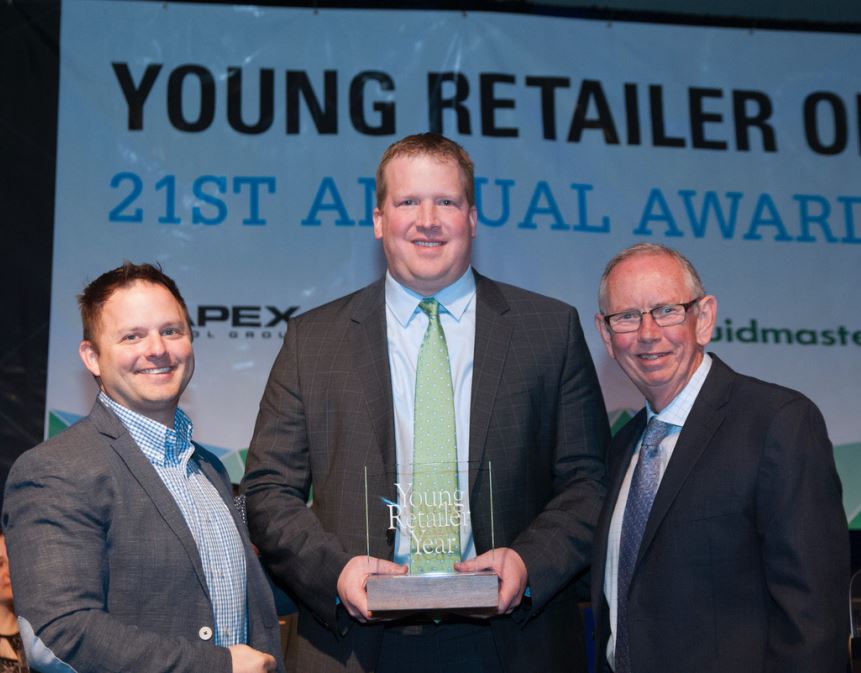 EDWARDSVILLE – Jason Plummer, vice president of R.P. Lumber, was recently named one of the hardware industry’s 2017 Young Retailers of the Year award recipients by the North American Retail Hardware Association.

The award, now in its 21st year, identifies and promotes the next generation of aspiring independent home improvement retailers, recognizing individual achievement by industry retailers age 35 and younger throughout the United States and Canada. Selected from different retail categories, eight winners were chosen based on a number of criteria including professional activities and highlights in areas such as career and community involvement, hardware industry education and extracurricular activities.

Plummer was honored at an event May 8 in Las Vegas as part of the National Hardware Show and NRHA All-Industry Conference.

Plummer’s commitment to excellence is shown in his dedication to constantly improving and growing R.P. Lumber, one of the largest family-owned hardware, lumber and building material dealers in the country. Plummer is involved in numerous functions at R.P. Lumber, including new store development, finance, merchandising, purchasing and operations. Plummer also pointed out the close-knit organization at R.P. as a key strength of the company.

“My parents and my sisters work in the business,” he added. “It is a blessing to be able to work every day with your family and the many great team members we have at R.P. This year is our 40th anniversary, and we have a lot of team members who have been with us 20, 25 and 30-plus years – a real testament to the company and our team.”

R.P. Lumber was founded by Jason’s parents, Robert and Donna Plummer, in 1977, with one store in Staunton. The company has since grown to 66 locations across Illinois and Missouri and recently launched a new inventory and merchandising program that will roll out to all their locations this year.

“My goal is to make sure our team members and existing stores are constantly improving,” said Plummer. “We want to perform at our best so we can deliver R.P.’s Best Service and Best Value, our hallmark.”

Additionally, Plummer is working on expanding R.P. Lumber’s digital capabilities, recently rolling out a new website and entering a partnership with an ecommerce platform, allowing the company to offer more than 100,000 items for sale online. Other future initiatives include opening additional stores in 2017 and expanding the company’s kitchen and bath business.

Plummer is on the board of the Illinois Lumber and Material Dealers Association and remains active with other organizations such as the Illinois Business Alliance and numerous Chambers of Commerce as a voice for business in regards to government regulations, taxation, and other issues impacting employment, growth and economic opportunity.

“To be selected as a Young Retailer of the Year is a high honor, one that Jason Plummer has earned through his dedication to business improvement and passion for his community,” says Bill Lee, NRHA president and CEO. “The industry anticipates the selection of the program honorees every year, and we’re thrilled to celebrate Jason’s extraordinary accomplishments.”

This isn’t the only recent national recognition for the Plummer family. Hardware + Building Supply Dealer (H+BSD), a national publication covering the home improvement industry, named R.P. Lumber its 2017 Hardware All Star for the state of Illinois. RP Lumber was the only company in the state, and one of only 50 nationwide, to be selected for All Star status.

The magazine’s editors select their All Stars based on an extensive range of business criteria, including longevity, growth, employee development and retention, creativity and local involvement. In recognizing RP Lumber, H+BSD highlighted the company on “the strength of its story as a classic American success” and its consistent growth over the past four decades.

“We’re honored and grateful to receive this recognition and be counted among such a select group of successful independent home improvement businesses across the country,” said Plummer. “Our entire team works hard to build relationships, go the extra mile for our customers and provide them the best experience possible. This recognition wouldn’t be possible without our team’s efforts and customers’ support.”

PHOTO: Jason Plummer, center, receives his Young Retailer of the Year award at the National Hardware Show May 8 in Las Vegas