No, for more than 20 years, trade pact has benefited farmers, U.S. economy

By RICHARD GUEBERT JR.
I farm along the Mississippi River, just 60 miles south of St. Louis. I constantly see barges traveling down the river, carrying corn and soybeans headed for markets around the world. With 95 percent of the customers for products I grow living outside the U.S., shipping grain via barge is a necessity. 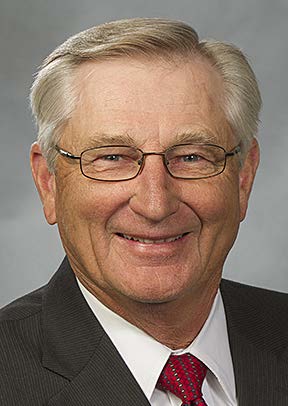 But, a mere month into a new presidential administration, I’m wondering if I’ll see fewer barges carrying those staples to the Gulf of Mexico because President Donald Trump is seriously considering limiting my access to foreign markets.
While farmers and ranchers, who largely voted for Mr. Trump, can appreciate his policies on regulations and his quest to challenge established politics, his policy regarding trade is more than a little scary.
To kick off his time in the White House, Mr. Trump withdrew from the Trans-Pacific Partnership. While he was simply making good on a campaign promise, it still was shocking to see him throw out a bipartisan agreement that could have added $300 million per year to agricultural cash receipts in Illinois, and $127 million per year in net agricultural exports from Illinois.
But now, Mr. Trump is looking to make good on another campaign promise: renegotiating the North American Free Trade Agreement, or NAFTA.
NAFTA is a three-country accord negotiated by Canada, Mexico, and the United States and ratified in 1994. NAFTA’s terms, which were implemented gradually through January 2008, provided for the elimination of most tariffs on products traded among the three countries.
In the 22 years since NAFTA’s implementation, U.S. agricultural exports to Canada and Mexico have more than quadrupled, growing from $8.9 billion in 1993 to $38.6 billion in 2015. NAFTA is a big deal for Illinois, too, considering Canada and Mexico were Illinois’ top two trading partners, accounting for more than $26 billion in exports in 2015.
What’s more, before the agreement, Canada was the fourth leading U.S. market. It is now the number one market for U.S. agricultural exports, and by far the largest U.S. market for high-value consumer-oriented products. South of the border, Mexico is the top market for U.S. corn, soybean meal, and poultry, as well as the second largest market for U.S. pork.
But it’s not just farmers who benefit from trade agreements like NAFTA.
In fact, every $1 in exports of grains and grain products generates an additional $3.23 in business sales across the U.S. The positive economic effects of corn exports also benefit wholesale trade, real estate, oil and natural gas production, and the banking and financial industries.
But what about jobs? During the presidential campaign, and while discussing NAFTA after his swearing-in, Mr. Trump alleged the deal had shifted U.S. manufacturing production, and jobs, to Mexico.
However, many economists disagree, saying that the recent troubles of U.S. manufacturing have little to do with NAFTA, and argue that manufacturing in the U.S. was under stress decades before the deal was signed.
In fact, according to the Peterson Institute for International Economics, while some jobs are lost due to imports, others are created. With those new jobs, consumers benefit significantly from the falling prices and often improved quality of goods created by import competition.
To put the numbers into perspective, the Business Roundtable of Illinois estimates that nearly one in four Illinois jobs depends on international trade. What’s more, Illinois’ trade-related employment grew 5.7 times faster than total employment from 2004 to 2014.
What’s more surprising, especially given the 2016 presidential campaign rhetoric, the majority of Americans surveyed in a 2016 Gallup poll view foreign trade as an opportunity for economic growth through increased U.S. exports. Nearly half of Americans surveyed by Pew Research Center in 2015 say free trade agreements have helped their family’s finances.
Perhaps consumers recognize that reducing or eliminating tariffs results in lower prices for imported products. I’m the first to admit, I like paying less for the products I purchase.
So far, the talk surrounding NAFTA is just that: talk. While Mr. Trump continues to discuss and dissect NAFTA in the press, and play hardball with Mexico, he has yet to inform Congress of his intent to reopen the agreement.
Unfortunately, that doesn’t necessarily mean no harm has been done. In February, Mexican senator Armando Rios Piter, who leads a congressional committee on foreign relations, introduced a bill forcing Mexico to buy corn from Brazil and Argentina instead of the U.S.
It’s just the first sign of action from Mexico in response to Mr. Trump’s threats against the country. According to Rios Piter, his proposed legislation is a good way to tell Mr. Trump and his administration that “this hostile relationship has consequences.”
As a farmer, trade is absolutely crucial to my business today and my business in the future. While every agreement can be improved, the market access and tariff benefits U.S. grain farmers like me have under NAFTA are critical and must be preserved.
Richard Guebert Jr. is the president of the Illinois Farm Bureau and serves as full-time executive officer.  He is also president of Country Financial, Illinois Agricultural Service Co., and the IAA Foundation.  He also serves on the coordinating committee for GROWMARK, Inc. Guebert and his son, Kyle, operate a farm, and Guebert and his wife Nancy reside in Ellis Grove.