By ALAN J. ORTBALS
When it comes to taxes, homeowners in Illinois and Missouri are pretty much even. That’s the gist of a comparative tax analysis done by John Foster of the Department of Public Administration and Policy Analysis at SIUE. The report was commissioned by the Illinois Association of Realtors and released in December. 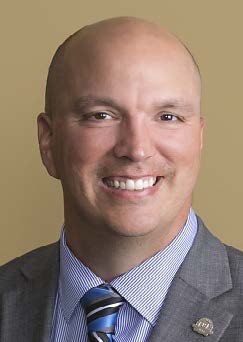 “Our membership sells Illinois,” said Kyle Anderson, local government affairs director for the IAR. “They sell it as a great place to live, work and raise families and one of the hurdles that they face a lot of times is this impression that Illinois is terrible for taxes.”
They get that idea, according to Anderson, because of real estate taxes which, he admitted, are higher than those paid on a similarly valued house on the Missouri side. But, he insists, that’s only part of the picture.
“We are not arguing property taxes,” he said, “but what we wanted to look at was where do we fall in overall tax burden for an average family of four. We wanted to shift the focus away from strictly property taxes, which is not a strong suit for us, and we wanted to see what the overall tax burden was. When you factor in sales tax, personal property tax, property tax, income tax, etc., it came out to be that we are much more competitive on overall tax burden than people anticipated.”
As the study points out, that’s because there are a number of taxes that either are lower in Illinois or not imposed at all. For example, Illinois’ individual income tax rate is 3.75 percent as opposed to Missouri’s 6 percent. Missourians have to pay a personal property tax on things like cars, boats and trailers. Illinoisans do not. And Illinois does not levy sales taxes on groceries or drugs.
“It confirmed what we already knew,” said Deb Frazier, CEO of the Realtor Association of Southwestern Illinois. “But now we have actual proof to show that we were correct. Our members can show their clients that the tax burden is a wash.”
While Frazier was not surprised by the findings, many of her members were, she said. They fight an uphill battle because buyers tend to focus on the property tax bill and don’t look any further. She said she’s been meeting with realtors at the various brokerages to arm them with the information and a simple comparison that boils the 100-plus page report down to a one-page handout. It gives them the ammunition they need to combat that property tax sticker shock some buyers feel.
Anderson says the reality is that governmental services are not free. They have to be paid for via taxes. What types of taxes and how they are structured will vary from state to state and municipality to municipality, but Mr. and Mrs. Homeowner are not going to get something for nothing.
“We are overly burdened with property taxes,” Anderson said, “but buyers see that and they apply that perception across the board, which is not accurate. We knew going into it that the core services, like police, fire, snow removal, animal control, all those things that taxes pay for, cost money and have to be paid for one way or the other. So, we knew that we were going to be somewhat competitive. It came back better than we thought it was going to be.”
Rob Wigton, CEO of the Greater Gateway Association of Realtors, said he wanted to give his members ammunition to help them expand the buyer market area.
Too often, he said, homebuyers who work on the Missouri side limit their search to the west side of the river. This tax comparison information, coupled with home values, he said, would give them a reason to look on the east side of the river as well. Wigton says that prices for similarly sized and located homes are lower in Illinois than Missouri so buyers can expect to get more for their money on the East side.
“All things being equal and the tax burdens being relatively similar,” Wigton said, “why would somebody not want to take $300,000 and buy a home on the Illinois side where they could get a whole lot more for their money? They have a great deal more purchasing power over on this side. It would take a whole lot of years to make up the small difference in annual tax savings, in Missouri to compensate for the purchasing power that you get for a home over here.”
At this point, the differential in home prices is Wigton’s opinion — although one shared by Anderson. He said he hoped to be able to substantiate that with a phase two study that would focus on home prices. That report could be done later this year.