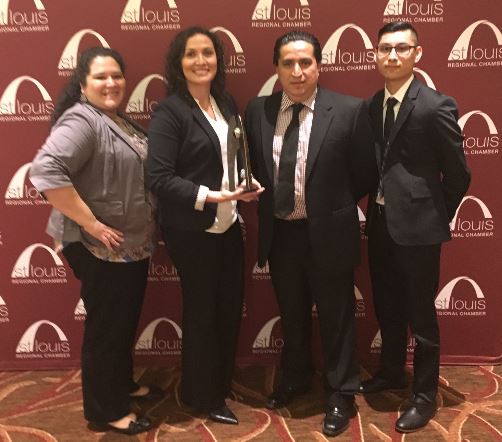 TheBANK of Edwardsville was a proud winner of an Arcus Award from the St. Louis Regional Chamber of Commerce at its 4th annual awards ceremony Thursday, Feb. 23, at the Hyatt Regency St. Louis at the Arch.

TheBANK won in the “Achievement in Inclusion and Talent Attraction” category for its Fairmont City Center. The Arcus Award for Achievement Inclusion and Talent Attraction honors a company, organization or institution for providing leadership through the creation of a program or initiative that promotes a diverse and global workforce and increases opportunities for individuals and businesses.

Previous winners of an Arcus Award for Achievement in Inclusion and Talent Attraction were the International Institute of St. Louis, St. Louis Mosaic Project and Challenge Unlimited, Inc.

Opened in 2015, the Fairmont City Center is the first fully bilingual bank in the St. Louis metro area, serving a community that is 70 percent Hispanic and where nearly 40 percent of the residents live below the poverty level. Before the banking center opened, residents relied on grocery and check cashing stores for the financial needs. Now the town of 2,500 has a full-service bank – a place to cash checks, open checking accounts, save money, and apply for loans.

TheBANK submitted a nomination for an Arcus Award in November and was informed in December that it was one of six finalists. Winners were not announced until the awards ceremony Thursday night. Business Development/Lender Sandy Smith, who was instrumental in getting the Fairmont City Center up and running, along with the Fairmont City Center team of Marisa Buffa, Eric Herrera and Jorge Medina, accepted the award on behalf of TheBANK.

This is the second major award TheBANK has received for its Fairmont City Center. In 2016, TheBANK was nationally recognized by the American Bankers Association as its choice for the Community Commitment Award in the “Nontraditional Borrower and Unbanked” category.