PHOTO: Sen. Bill Haine (to the right, facing camera) and Rep. Dan Beiser (to Haine’s right) listen during the tour as Madison County Chairman Alan Dunstan (back to camera) explains the impact the levees have on Madison County businesses.

EAST ALTON – Eighty-six miles of levees separate the Metro East from the waters of the Mississippi River, and those levees are receiving much needed upgrades. 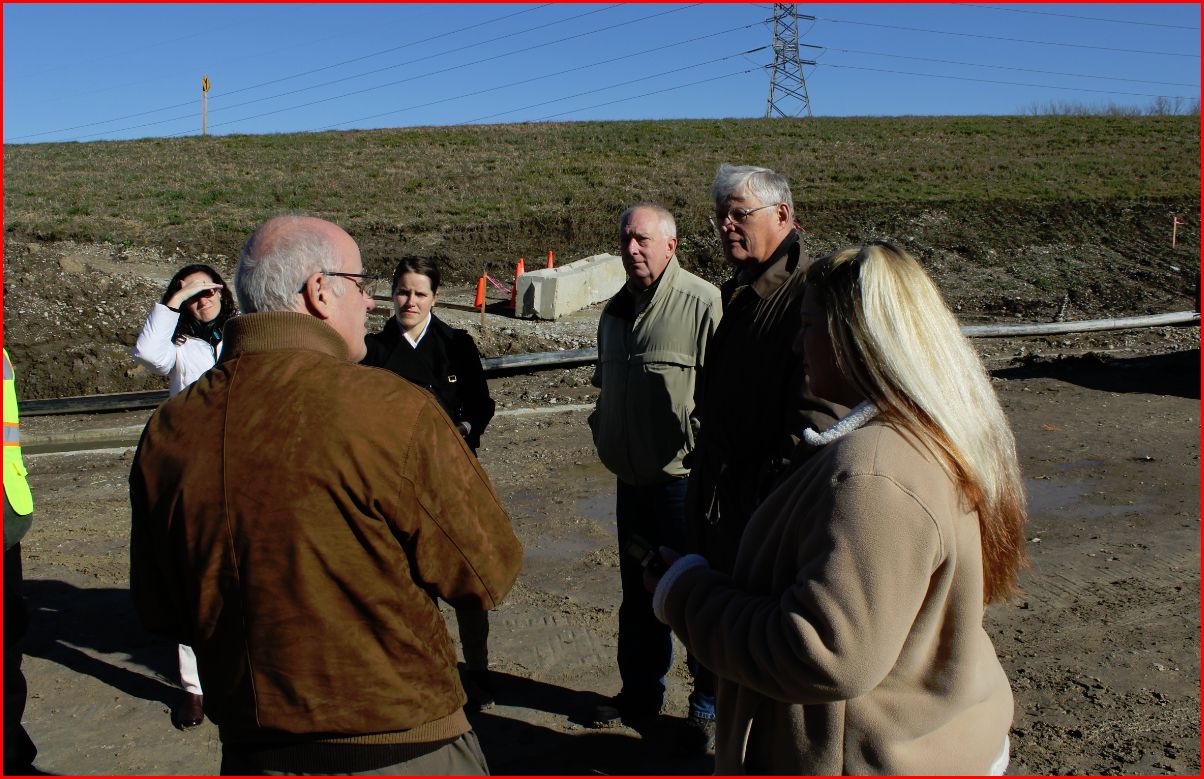 “These upgrades are an investment in the safety of the entire Metro East. Every dollar of this project goes toward protecting businesses, property and — most importantly — lives. It’s impressive to see a project of this scale and complexity on schedule and under budget,” Haine said.

Chuck Etwert, SWIFPD’s chief supervisor, conducted the tour and gave the officials an update on the system-wide upgrades.

“High river stages earlier in the year delayed the project, but we continue to make substantial progress toward our goal of achieving FEMA certification,” Etwert said.

The SWIFPD consists of 86 miles of levee systems that stretch between Alton and Columbia along the Mississippi and its tributaries. The levees protect 174 square miles including more than 155,000 people, 4,000 businesses and 55,000 jobs.

In 2007, the Federal Emergency Management Agency reported major issues with the existing levees. The ruling led Haine and other Metro East lawmakers to pass legislation that authorized the creation of the flood protection districts, which fund, maintain and improve the existing levees in Madison, St. Clair and Monroe counties.

The current construction will bring the flood prevention district back to FEMA’s acceptable levels of protection.

When completed, the improvements will bring the levee system up to a 100-year flood protection level. The ‘100-year flood’ is used to describe a flood event that has the probability of occurring once in a 100 year period. Flood stage in St. Louis for the Mississippi is 30 feet. A 100-year flood would occur if the river reached 54 feet.

The estimated price tag for the project work is $72 million, with $41 million having been paid out as of October and an expected surplus of $15 to $20 million.

Overall construction is on track to be completed by next summer.

The specific work site Haine toured was the construction of a deep cutoff wall where the Wood River feeds into the Mississippi in East Alton.

Work crews are building a 1,900 feet long, 140 feet deep subterranean wall made of cement and bentonite, a type of absorbent clay. The wall stabilizes the levee and prevents water from seeping through or beneath the earthworks at a cost of $13.9 million.

As SWIFPD completes its upgrades to protect against a 100-year flood, it has already began planning and work to be able to handle a 500-year flood, the maximum federally authorized protection level.

“The 500-year level of protection has always been the long term goal of the council,” Etwert said.

The governing council has already approved the designs for 500-year flood level improvements in the Wood River and Metro East Sanitary District Levee Systems, with construction expected to start in October 2016.

The council will proceed with designs of Prairie Du Pont and Fish Lake levee improvements to once the Corps of Engineers has identified needed projects.

The improvements to SWIFPD are closely coordinated with the Army Corps of Engineers to make sure all work is eligible for Work In-Kind Credit, with the corps providing 65 percent of the shared funding.