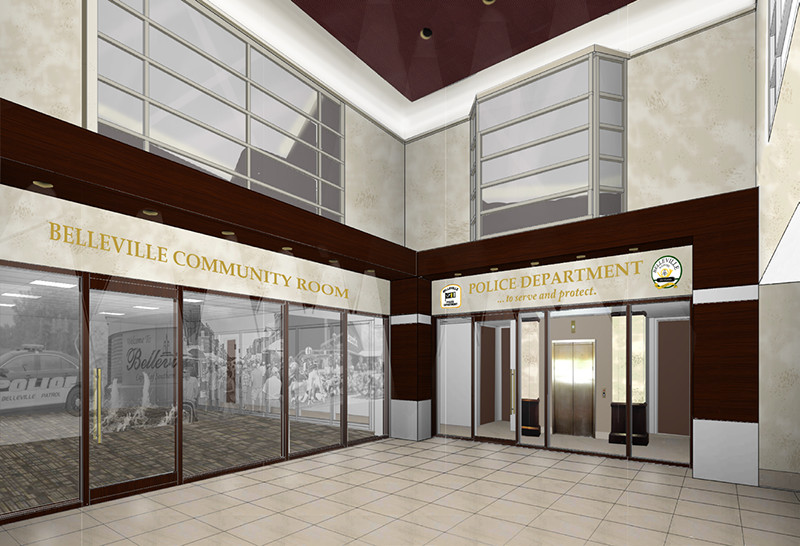 Scheduled for open operations in spring 2016, Belleville’s new police headquarters will feature a modern forensics laboratory and evidence processing facility, a first floor sally port for the safe, accessible and secure transfer of detainees and a new 9-1-1 Dispatch center.
The sally port and dispatch additions will be constructed as tornado shelters to accommodate a full building population, the holding cells in the new detention facility will allow detainees to shelter in place safely, and the building will also feature a 60-person community classroom. The new facility, located at 720 W. Main St. in the former Bank of Belleville building, will provide 44,635 square feet of updated space for the police department.
Construction of an onsite parking garage is planned to follow, providing direct access as well as storage and maintenance of the department’s fleet. The garage, which will be located on South Seventh Street adjacent to the new police headquarters, will hold 26 police cruisers.
These are the first and second phases of a three-phase city of Belleville project of which the Lawrence Group is providing architectural services. The firm’s Senior Associate Joshua Mandell is serving as the project manager and team leader for all three phases. Mandell has been involved since the beginning, authoring the feasibility assessment back in 2013 as well as serving as the programmer and planner in the earlier stages of the project’s development.
The third phase of the city’s project involves upgrades and renovations to approximately 35,000 square feet of City Hall, addressing necessary ADA improvements, safety modifications and an expansion of council chambers.  This final phase is expected to be complete during Spring 2017.
The city of Belleville anticipates total project costs at approximately $18.5 million for all three phases. IMPACT Strategies of Fairview Heights is the construction manager and Kaskaskia Engineering Group is providing civil engineering and site design services.