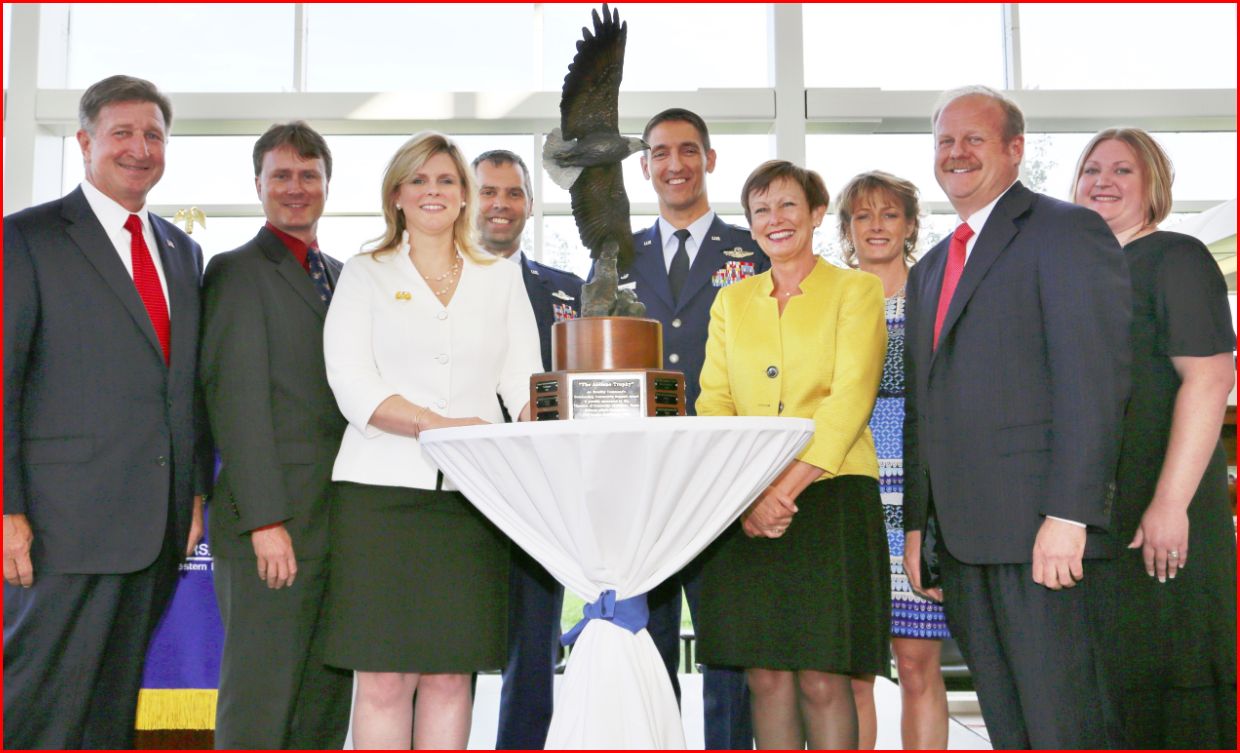 MASCOUTAH – Hundreds gathered Wednesday to celebrate the return of the coveted Abilene Trophy to Southwestern Illinois for a second time in three years in recognition of the support demonstrated during 2014 for Scott Air Force Base’s military members and their families.

Also known as the Air Mobility Command Community Support Award, the award is presented annually to recognize the community that provides the finest support to an Air Mobility Command unit. The Leadership Council Southwestern Illinois spearheaded this year’s nomination on behalf of the St. Louis region, submitting an application that highlighted a series of “firsts” that brought to life the depth of the region’s ongoing commitment for the men and women at Scott.

Dignitaries and supporters gathered in the terminal at MidAmerica St. Louis Airport for the awards presentation.

“2014 was a remarkable year in ‘Scott Country,’ during which new programs, initiatives and milestones, combined with ongoing efforts, helped to build on the region’s solid foundation of support for the men, women and families of Scott Air Force Base and further strengthened the unique bond we share,” said Gerry Schuetzenhofer, chairman of the Leadership Council Southwestern Illinois’ Military Affairs Committee. “As with the win in 2013, it was widespread regional support that propelled us into the No. 1 slot again, and we thank the many individuals, businesses, organizations and communities whose continuing passion to serve our military families has us now bringing the Abilene Trophy back to Scott Air Force Base.”

A central part of the award were letters of support from the public, businesses and government officials, scores of them filling a 3-inch thick binder that was included with the application.

Among the firsts showcased in the nomination were:

• Air Force Times ranking of Scott AFB as the No. 1 air base in the nation for airmen, and the many reasons contributing to that honor;

• The role of regional leaders in securing passage of House Bill 3939, which assured for the first time that prior schooling counts for the children of military families transitioning to Scott AFB;

• The first ever “Salute to Scott Air Force Base” as the Leadership Council dedicated its entire annual awards dinner to Scott AFB, highlighting the base and the individual missions housed there;

• Launch of the first-of-its kind networking event for veterans to help facilitate employment in Southwestern Illinois for as many separating military as possible;

• Celebration of the first anniversary of the Scott Patriot Program, which had grown to include an impressive 650 Patriots demonstrating their “military friendly” commitment through discounts or other support; and

• A summary of various other ways the region continues to further its first class system of support for the airmen and their families.

Representatives from the Abilene Trophy selection committee cited the definitive examples of support highlighted in this year’s application, and the comprehensiveness of the package in its entirety, as factors that led to the Leadership Council’s application capturing first place among the communities vying for the 2014 award.

The Leadership Council learned about the two-time win back on April 15, when the announcement was made by Gen. Darren McDew, commander, Air Mobility Command, and Gray Bridwell, chair of the Military Affairs Committee for the Abilene Chamber of Commerce, during an annual spring conference held at Scott Air Force Base.

The celebration included an unveiling of the trophy, which features a soaring eagle attached to a mountain base. The trophy travels between each year’s honored communities, with the names of honorees going back to 1999 on its base. It will be on display in various locations in both St. Clair and Madison counties.

“It’s impossible to truly understand the depth of the sacrifices made by the airmen of the Air Mobility Command Unit at Scott Air Force Base without walking in their combat boots
,” Schuetzenhofer said. “Nor, can we fully comprehend the extent to which this type of service impacts the personal lives of their family members. What a community can do, however, is what the businesses and individuals of the bi-state St. Louis region are doing – continually seeking ways to honor these individuals through demonstrating our respect, recognizing their contributions and taking action to enhance their quality of life while they are living here.”

Also on-hand for the presentation was Col. Kyle Kremer, Scott Air Force Base installation commander and commander of the 375th Air Mobility Wing.

“Last year Air Force Times named Scott as the best base to be stationed in the Air Force due to the quality of life and community support here,” said Kremer. “This second Abilene Trophy win in three years further highlights the superior relationship between the base and our Southwest Illinois community. We are grateful for their heartfelt patriotism and support, and are very proud to call them our family and friends.”

St. Clair County Board Chairman Mark Kern also participated in the ceremony, and highlighted another important reason why winning the Abilene Trophy means so much.

“With the potential for more defense spending cuts in the future, recapturing the Abilene Trophy is an accomplishment that will help to further strengthen Scott Air Force Base’s position in the eyes of the Department of Defense. One of the primary lessons learned from our role supporting Scott over the years is that a strong community effort matters to the DOD when it looks for ways to evaluate and compare bases across the country. Bringing back the Abilene Trophy is a real testament to the strength of the community support for Scott Air Force Base that exists here in St. Clair County and across the St. Louis region, and it enhances the opportunity for continued growth at Scott in the future.”

About the Abilene Award

About the Leadership Council