EDITOR’S NOTE: Troy Bozarth, 45, a partner at HeplerBroom LCC based in Edwardsville, was named president of the Illinois Association of Defense Trial Counsel on June 26. He lives in the Holiday Shores area with his wife Amy and three children, Zachary, Alaina and Alexandra.

IBJ: You’ve been involved with the group quite a long time?

Bozarth: I have been. Since ‘97 or ‘98 at least, as a member, then worked my way up to the board for several years.

IBJ: How did you get involved? 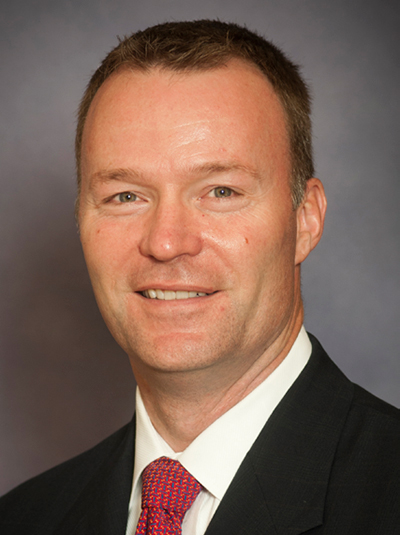 Bozarth: I got involved because one of my bosses, now partner, Gordon Broom, was a past president. Also (partner) Jeff Hebrank was a past president. Our firm has had the most presidents of any firm in the state. Paul Price and Tony Tunney from our Chicago office were also past presidents. It was important for them to have a younger member of the firm exposed to the education that was allowed by the organization. The education provides camaraderie with different lawyers who aren’t in your firm. They saw it as a way to grow a more well-rounded lawyer.
I started working on various committees — they have substantive committees and program-based committees. There is a Trial Academy put on for younger lawyers. There are different seminars. You figure out what you’re interested in and how you might help the organization and get some benefit from it yourself. Once you’ve done that you actually run for board positions — the board is the governing body of the organization. The (board executive committee) is made up of five officers — president, president-elect, first vice president, second vice president and secretary-treasurer. You start as secretary-treasurer and work your way up. This will be my fifth officer position.

IBJ: You’ve had a good, well-rounded look at the organization from a lot of windows …

Bozarth: Absolutely, it’s been a lot of fun. It’s definitely a lot of work but it’s an organization that a lot of us are very proud of. What we’ve been able to do, the voice we’ve been able to have. Hopefully that will have an effect on the civil courts in Illinois.

IBJ: What does the association do? Who does it affect?

Bozarth: IDC is a group of civil defense trial practitioners, primarily lawyers that litigate and try cases on the defense side of the “v.” We represent individuals, corporations, businesses — folks who have insurance and their insurance company pays for a lawyer if they get into an accident. The folks who get sued in civil court for money damages.

IBJ: Who are the typical clients?

Bozarth: They can be anyone from a Fortune 100 company to a sole-practitioner mom and pop — and individuals as well.

IBJ: What are the primary goals of your organization?

Bozarth: We represent about 1,000 to 1,100 members. One of our core goals is to maintain a fair and equal civil justice system. The best way to help society and our members is to have equal justice for everyone. We don’t think that it’s beneficial to anyone if there are no lawsuits, we also don’t think it’s beneficial to anyone if there are too many lopsided lawsuits. Fair access to an equal court system is the best way to have a society function. That’s really what we’re all about.

IBJ: So, you’ve been involved in this group almost since the beginning of your career. How has the scope of the organization changed?

Bozarth: The overall focus has always been on providing a fair and equal playing field for everyone involved in the courts, but it’s changed in how we’ve gone about doing that. What we’ve tried to do is be a voice for the trial system. In doing that, we’ve found ourselves dealing a lot more with public perception of the courts. Advocates for a fair and efficient judicial system as well as advocates for the bench. Judges can’t speak up publicly for themselves if they’re getting a bad rap, and good judges are good for everybody.
So we’re kind of an advocate for judges as well.

IBJ: You have a political action committee, too. Does it get very involved in support of candidates?

Bozarth: It’s not a huge PAC. We have candidates that we support of both political parties. Honestly, what we try to do is support candidates that have supported us. By that I mean they’ve listened to us when we have concerns, when we have an issue that we think is important.

Bozarth: Well, tort fairness. There are legislators who we might not always agree with, but at least they hear our concerns.

IBJ: I’m guessing that your group supports some of the legal reforms sought by Gov. Rauner?

Bozarth: I certainly think that Gov. Rauner has some good ideas, I don’t know that we necessarily agree with everything that he is proposing, but a lot of the stuff he has put forth as a legislative package closely traces some of the things we’ve been pushing for, for years.

IBJ: Worker’s comp reform being one of those?

IBJ: Are there any specific things you’re pushing regarding changes to law?

Bozarth: Well, we have always advocated for equality in how fault is apportioned between plaintiff and defendant. There is a different system for apportioned fault for plaintiffs in litigation than there is for defendants in litigation that doesn’t seem to be level. It goes to what the jury knows and doesn’t know, what it gets told. At the end of the day it goes to whose name appears on the verdict form, as to apportionment of fault. For example if you have someone who in your opinion is 99 percent at fault in an accident and they settle out before trial, then all the fault (if a case goes to trial) can be laid at the remaining defendants’ feet.
A recent example is a trucking accident, and the trucking company settles out but then there’s a lawsuit against the signage company regarding the signs along the road. All the things that the truck driver might have done incorrectly no longer weigh in the case. For jurors to do their job, they must weigh the evidence they are given. The question is, are they given the right evidence? We think there’s a fairer way to do it.

IBJ: How many of these cases actually go to trial versus not?

Bozarth: I’m not exactly sure what the stats are, but at one point is was something like 96 percent of cases resolved without a trial, and I think it’s probably higher than that now. I don’t know that that’s a bad thing. There are things the Illinois court systems do now to facilitate resolution outside of trial, arbitration of smaller cases, things like that. Alternative dispute resolution has been big the last 10 or 15 years.

IBJ: What do you personally feel that you’re bringing to this organization?

Bozarth: I feel like I’ve got some big shoes to fill. My first goal is to live up to what (my predecessors) have done. My second goal would be to continue on a path the organization has set to continue to fight for what’s right in the system and point out what’s wrong. If we’re not able to correct it, at least point it out and continue to be a voice for the system itself.

IBJ: Your concerns probably are shared by similar groups in other states.

Bozarth: Every jurisdiction is different. We have to focus on the things that are happening here, but by the same token there are a lot of things we face that affect other defense organizations. We’ve collaborated with Missouri, Indiana, Texas. We’ve put on a joint seminar with Missouri’s organization of defense lawyers, a comparative law seminar, centering around differences and similarities between state laws. We’ve had practitioners and judges from both sides of the river come talk. In Indiana we have put on a trial academy, where young lawyers come in and do mock trial-type activities.
We have board meetings on a monthly basis and seminars and lunches throughout the year. The bigger things are the annual meeting and spring and fall seminar — four or five big things a year.

IBJ: Are there any trending issues?

Bozarth: One of the big things (in Illinois) is the recent statute that limited the number of jurors from 12 to six in civil cases. It was a piece of legislation that went through fairly quickly. It just went into effect June 1. That has been something that a lot of our clients have been very interested in. Our organization did not support that in the legislature. It went through during the veto session, and Gov. Quinn signed it after the election.
It was presented as a cost savings, but at the same time, the (jury) fees were increased, so it ends up costing more. There are some constitutional issues that I think make it a problem as well. I think it will be challenged in the courts.

IBJ: Where did you go to school?

Bozarth: I got my undergrad at Illinois Wesleyan (University) in Bloomington, Ill., and went to law school at Drake University in Des Moines, Iowa. I’ve got a master’s of business administration and a law degree from Drake.

IBJ: How did you end up here?

Bozarth: I was coming back from Iowa with my (future) wife, who is from Illinois as well. I was looking for a place where I could practice interesting kinds of law. I didn’t necessarily want to be in Chicago. I grew up in Bloomington. This (HeplerBroom in Edwardsville) kind of hit the bull’s-eye for me.