By DENNIS GRUBAUGH
Spec buildings that disappeared from the Southwestern Illinois horizon in recent years are making a comeback, with several large projects in Collinsville among them.
Ben Cahill, vice president of brokerage services for The Maune Co., says his St. Louis-based company will break ground in June on a $4.3 million, 53,000-square-foot, “semispec” building that could house as many as 10 tenants, at 1607 Eastport Drive in the Eastport Plaza area. Semispec means some tenants are already assured, while others will be sought.
“There’s unquestionably an uptick in business. If you even heard about a builder talking about a spec building two years ago, you wouldn’t have believed it,” he said during a recent City of Collinsville presentation.
It will be Maune’s third project at Eastport, and it should be done in December. Two other buildings were constructed previously, just east of the planned site. A fourth looks likely and would be built just to the west.
“Collinsville is a great spot for it. It’s being driven by supply and demand. There’s not enough product to satisfy all the people who want to be here,” Cahill said in the taped presentation. “If all our conversations right now would come to fruition and culminate in a lease, we would fill this building and start on a forth building immediately. The fourth building we could build would be as large as 61,000 square feet and it would be very similar in style (to the others).”
Cahill said Collinsville offers “unparalleled access to transportation,” which includes access to Interstates 55, 70, and 255 and a location only 10 minutes from St. Louis.
The commercial and industrial market in the Southwestern Illinois area has steadily improved in the last three or four years, said Wayne Barber, principal at BARBERMurphy Group, a commercial real estate company.
“We even have the problem — and it’s a good problem — of a lack of inventory, which means product to sell and lease, which means promoting this third building in Eastport, to be developed by Maune,” he said in the same presentation.
Collinsville’s Economic Development Director Erika Kennett said she is “really energized’ by the projects.
“We’re not looking to compete with Gateway Commerce Center (in nearby Edwardsville and Pontoon Beach). We’re looking for 50,000- to 100,000-square-foot concrete tilt-up (construction).” 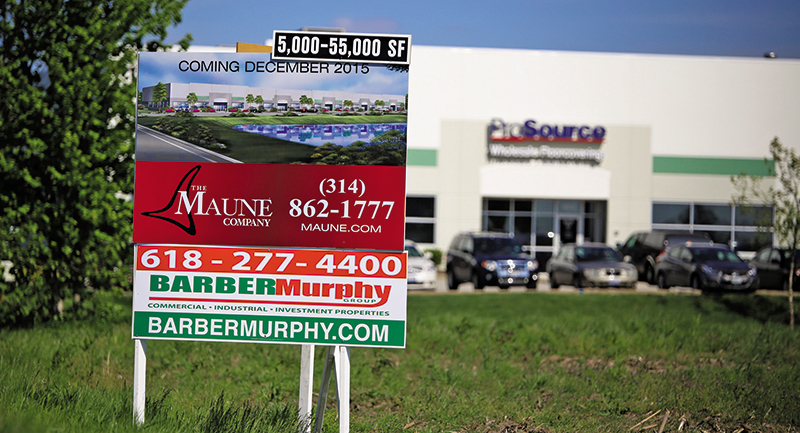 Eastport and surrounds have surged of late.
Brownstone Properties LLC is looking to build three or four additional facilities along Eastport Plaza Drive, similar to an office/warehouse building it constructed and leased at 1604 Eastport Plaza Drive (occupied in part by Weaver Boos Consultants and Louer Facility Planning Inc.). The proposed office-warehouse buildings would be built on either side of what Brownstone has already developed.
“It would be three, 18,000-square-foot buildings, or two 18,000-square-foot buildings and two 9,000 square-foot buildings,” Kennett said.
To the south of that site, Brownstone is also eyeing the possibility of constructing a brick building that would be next to and a twin to the Dynegy building that now exists at 1500 Eastport Drive.
Kunkel Commercial Group is working to market the properties for Brownstone owner Andrew Brown.
Among other Eastport developments, Kennett said:
– A medical marijuana pilot program dispensary is preparing to open this November at 1014 Eastport Plaza Drive, about 500 yards from the Illinois State Police headquarters. Projected sales are $28 million in the first year and $48 million in the second. Health Central, LLC of Effingham is finalizing its licensing to be in the program. Up to 30 full-time equivalent jobs are expected.
– Lindenwood University, which now occupies most of the former Sanford Brown College building, has told city officials it is interested in the remainder, with the proposition not if but when.
– Gateway Industrial Power is expanding just north of Eastport. It is located off Horseshoe Lake Road and Fournie Lane.
– LaQuinta Inns and Suites just opened a facility in the remodeled Microtel Suites space on Gateway Drive.
Elsewhere in town, there have been recent notable projects:
– A new $900,000 retail space for Little Caesar’s in the Collinsville Crossing area along Interstate 70. There are also three bays for additional retail.
– Dollar Tree is working on a $2.2 million store on the west side of the Kohl’s development at 609 Beltline Road. It’s a 19,000-square-foot building, and Dollar Tree will be taking 9,000 square feet, leaving the remainder as Class A retail space available retail space. The project is scheduled to be complete by Nov. 1 per Dollar Tree’s lease agreement.
– Collinsville lost its Kmart, an 86,000-square-foot store that closed in the Keebler Crossing area on West Beltline Road, but a local developer, Forrest Lerch, has acquired the site and plans substantial improvements, Kennett said.
“When he first acquired the property he bought everything but a (nearby) Taco Bell, and there was a gas station there. He saw the value of his investment and purchased some extra land directly behind the building and has purchase the gas station, which has been demolished,” she said. “We’re looking to divide it into three, 30,000-square-foot bays approximately. That’s a lot easier to fill than to find one user for 86,000 square feet.”
No potential tenants have been identified, but rumors of a Trader Joe’s, Target or a Pottery Barn are not true, she said.