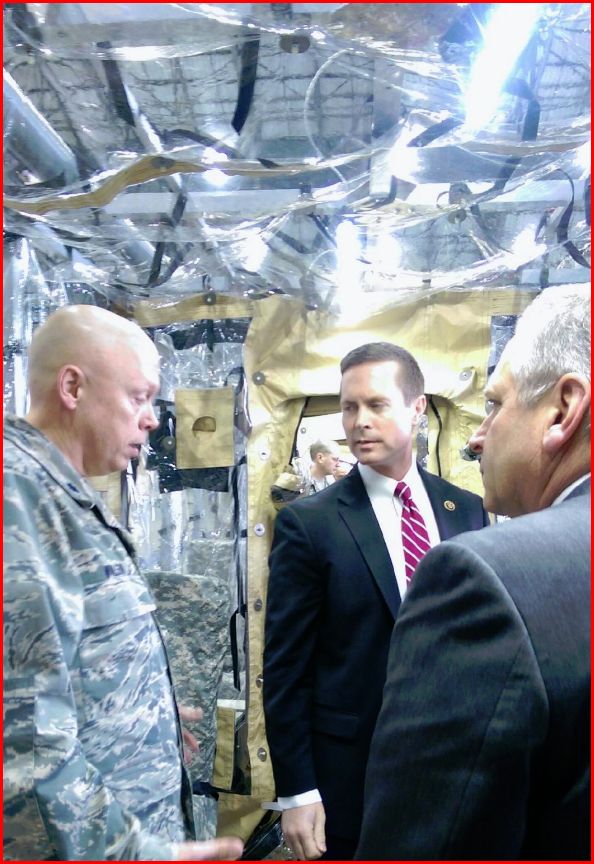 Davis, center, chats with officials during the visit to Scott AFB on Friday.

The pair on Friday attended the unveiling of U.S. TRANSCOM’s Transportation Isolation System, which will be used by the U.S. Department of Defense to safely transport patients with highly contagious diseases to hospitals around the world.

“This Transportation Isolation System developed here at Scott Air Force Base will play an instrumental role in treating the Ebola epidemic that has claimed the lives of so many in West Africa and hopefully prevent future outbreaks,” said Davis. “Being able to safely transport members of our military, health workers, and others if they are infected, is critical to ensuring these volunteers who are risking their lives to help others can receive treatment. The work done by Gen. Paul Selva and his team to develop this life-saving technology is truly amazing.”

“This is another needed tool in a world where Ebola, SARS and other potential highly contagious diseases are threatening the health and safety of our citizens and their caregivers,” said Bost. “The TIS System also protects the men and women in our military who come in contact with affected patients who are being treated or transported to other facilities around the world.”