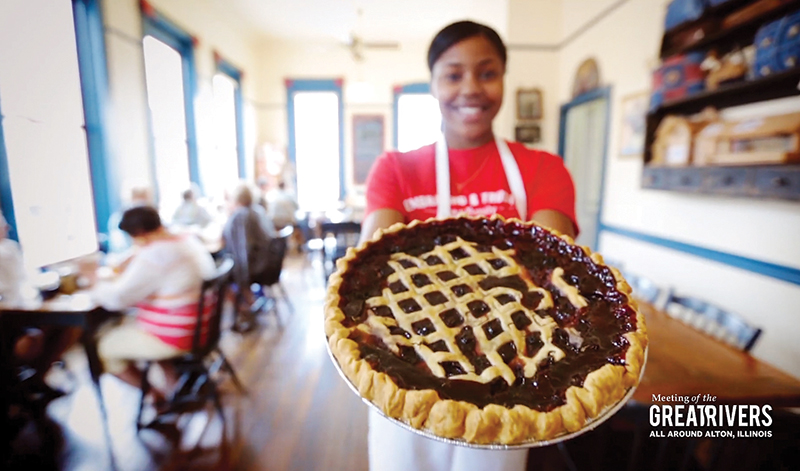 Alton area tourism officials will soon roll out a glitzy video campaign touting the region as a place “Where the Rivers Meet the Road.”
A 90-second video produced by Alton native Ryan Hanlon was introduced at this year’s annual Tourism Summit held by the Alton Regional Convention and Visitors Bureau. The agency wants to use the video to build on successes it experienced in 2014 when thousands visited the region. The video, in shortened and original forms, will be introduced on Internet sites this spring. It features scenes touting the romantic appeal of life in the River Bend, set to music.
The video will be a big part of this year’s marketing effort, said Brett Stawar, president of the bureau.
“It’s simple economics. Tourism brings jobs and economic activity to the region, which affords a better quality of life for us all,” Stawar said. “One by one, these (events) add up to our region’s largest economic impact. Last year, the regional impact of tourism on Jersey, Calhoun and Madison counties was again near $425 million dollars.”
The video is part of a destination marketing campaign that the bureau began several years ago to tie itself to its location at the convergence of three major rivers as well as the 33-mile stretch of the Great River Road that weaves between those rivers.
Hanlon, owner of Route 3 Films, said he’s traveled the country and loves relaying to others the strengths of his hometown.
“This is a project I’ve wanted to make ever since I understood what a camera was,” Hanlon said. “I like to explain to people what it’s like to grow up here. It’s difficult to explain in words what these landscapes are like.”
Set to fast-paced, country-flavored guitar music, the video shows scenes of living and beauty throughout the market. It was well received by the audience at last month’s summit.
Among scenes are zip lining, parasailing and wine drinking in Grafton, concerts and mansions in Alton, Historic Elsah, The Nature Institute in Godfrey, hikers, motorcyclists, rolling farmland and the River Road and its bluffs.
Stawar said: “I’ve seen it a million times and still go wow.”
The goal is simply to use yet another platform to drive people to the Alton region.
The video will be part of a couple of advertising strategies. On the Internet it will be used in 15-second, 30-second and 90-second versions as part of a “preroll,” a video that advances another video, usually associated with clicking on a news story, Stawar said.
“It will be geotargeted to ones that we think will click through to get more information, based on their demographics,” he said. “We’re targeting specifically empty nesters in a 500-mile radius of the area, with moderate- to high-income levels, and those who have also identified outdoor recreation, bird watching and natural beauty as their hobbies of interests.”
Geotargeting is Internet marketing that plays off the geolocation of a website visitor, delivering different content to that visitor based on his or her location or other criteria.
Among websites where people might it is CNN, which is one of the bureau’s feeder sites.

In addition to preroll the bureau is going to look at native advertising — paid content — on a variety of platforms. The bureau spends money on purchasing advertising that touts the “secrets of the Great River Road,” he said.
The video will also be used  on the organization’s website and social media and shared with all the supporters of the bureau.
“We’ve also talked to some of our hoteliers about running it on their informational channels, but we haven’t gotten clearance yet,” Stawar said.
Most of the filming was done last summer.
“We gave him a shot list and a little bit of creative control, but we told him where to go. He did a great job,” Stawar said of Hanlon.
At this point, there is no plan to use the video on commercial television, he said.
The effort is not just a romantic notion — there is money in tourism.
The revenue generated last year supported 3,300 full-time jobs in the region, he said. More than $11 million of it trickled back to counties through tax receipts, he said.
Significantly, overnight guest stays increased for the 11th consecutive year — 177,170. That was measured against seven lodging operations tracked in the market, Stawar said.
“This is a record, and the bar has been set for 2015,” he said.
In recent years the tourism bureau has stepped up its efforts to reach across the country — and across the globe — to draw in visitors and the results have grown in proportion. This past year locally produced videos were recorded in five languages and circulated to draw in intercontinental visitors.
Some of the highlights of the efforts:
– More than 35,000 people came to the region as part of eagle-watching events. They spent an estimated $2.5 million in the community as a result.
– Some 1,500 tickets were sold at the Alton Visitors Center for shows being performed at The Liberty Bank Alton Amphitheater on the Mississippi Riverfront. National entertainers came to town including Kenny Rogers.
– The Visitors Center welcomed 15,441 people during the year
– Group sales personnel met with 40 group tour operators and 12 sporting event planners at industry trade shows.
Several events coming up this year are likely to add to local coffers.
– The Miles Davis statue and memorial project dedicated to the Alton native and jazz legend will be dedicated in Downtown Alton this summer.
– Several regional or national sporting tournaments are again being held in the Alton area, including some new ones. The Great Lakes American Legion Baseball Championships, Midwest will occur in August. Also this summer, Sept. 12 to 13, some 3,000 people will participate in the MS Bike Ride at Lewis and Clark Community College.
– The Illinois HOG Rally will use Alton as its home base for the annual ride of the Harley Owners Group, Aug. 12 to 15.
– The national Haunted America Conference will be held June 19 and 20 in Alton.