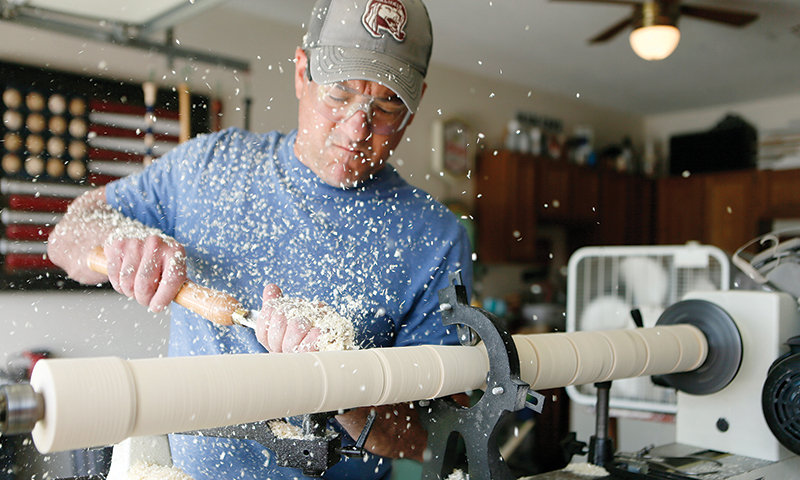 Last year’s inaugural Metro East Startup Challenge hosted and organized by the SIUE Small Business Development Center and University Park at SIUE was won by Todd Eschman’s Old Dutch Classic Bats in Swansea. The prize was $10,000.
Eschman is the sports editor for the Belleville News Democrat. He said one day in 2011 someone called asking about the St. Louis Perfectos, the 19th century forerunner of the St. Louis Cardinals. Intrigued, he began doing a little research and discovered the world of vintage baseball. According to Eschman, there are dozens of teams scattered around the United States that play the game by the rules and with the equipment of the 1860s. He decided to start his own team.
“Authentic presentation is at a premium in vintage baseball,” Eschman said, “and the teams try to outdo each other.”
He discovered that teams bought their vintage uniforms and balls from a company in Connecticut, but no one made vintage bats.
“Guys were buying modern wood baseball bats and sanding off the labels,” Eschman said. “I did some research on the evolution of the bat, bought a lathe and started making my own bats to historic specifications. Guys would see my bats at games and want me to make them one. I would just charge them my cost but it got to be too much and I realized I could start making some money doing this.”
Eschman said he contacted Patrick McKeehan, executive director of the SIUE SBDC just looking for help with legalities and found himself entered in the business plan competition and ultimately winning it. He said he found the process very helpful in focusing his thoughts and long-term plans.
“The state of the business always has a direct impact on my next step,” Eschman said. “Once I get to a certain level of revenue, that’s when I know it’s time to move out of the garage and get a separate shop, or it’s time to buy larger quantities of wood or upgrade my lathe. There are all kinds of things I want to do. I’m just plotting my progress and letting that progress trigger those investments.”