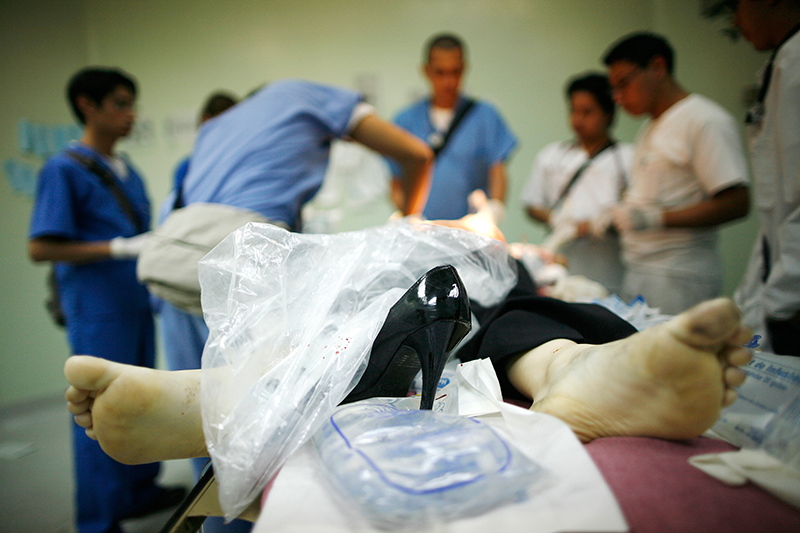 Health insurance companies are putting the squeeze on hospitals and other healthcare providers in preparation for the rollout of the health insurance marketplaces, scheduled for Oct. 1, according to Jeff Taylor, vice president of The Bovinette Agency in Belleville. The firm specializes in employee benefits and group health insurance.
“I think what a lot of these carriers are wanting to do is be able to get their pricing as low as possible when these exchanges open,” Taylor said. “It will be similar to when you search for an airline fare. You’re going to go on and you’ll see these different rates from these different companies with fairly similar plans. No one wants to be the high-cost provider, so the ball is swinging over to the side of the court that’s going to push them to really do their best to drive down costs.”
Another byproduct of the marketplace competition, according to Taylor, is that insurers are limiting the number of providers that are “in network.” That may mean, he says, that the insurers will continue to have a fairly broad network structure but offer deeper discounts with a handful of select providers. Blue Cross, he says, is doing that and Coventry in St. Louis has also designated a select network which excludes certain providers.
“California is a lot farther along in its exchange development,” Taylor said. “Unlike Illinois, California is actually doing all of the work to build its own exchange. When they initially announced their rates, they looked pretty good. But when you really looked into them, the networks that were being provided were about one-third the size of their normal network and didn’t even include Cedars-Sinai Medical Center, which is one of the major hospitals in the Los Angeles area.”
He says Blue Cross of California, for example, has a network that includes about 96 percent of the healthcare providers in the state. But its exchange network includes only 36 percent of them.
Taylor says it will be interesting to see if these networks stay tight or grow over time. He adds that when PPOs (preferred provider organizations) and HMOs (health maintenance organizations) were created, they had stricter networks, too.
“When HealthLink first started, it was set up by a group of hospitals and only about half of the hospitals in the area were actually in it,” Taylor said. “They were able to drive more discounts then. But as time went by, more and more hospitals and doctors came in to where pretty much everybody was in it. It’s very hard to get preferential pricing or a deeper discount from one provider when they know that every other provider in the area is in because they’re not going to be able to generate new patients by joining the network that everybody is in.”
According to Taylor, the Affordable Care Act is also driving the movement to a capitated reimbursement system under which healthcare providers are paid by the person – not by the service. He predicts that a capitated reimbursement approach will improve service and outcomes while driving down costs, as providers will be incentivized to get patients better faster and keep them that way.
Speaking of the American healthcare system, Taylor said, “Our costs are high. Our costs are two to three times what you see in other parts of the world. It’s a challenge for us. Our providers have not really had a whole lot of limitations placed on them in the past. They may think they have, but in comparison to the worldwide medical community, they have not. It’s going to be incumbent on them to do what they can to bring the costs down. There’s going to be constant pressure simply because of the expense of health care in this country.”
Locally, the struggle between Memorial Hospital in Belleville and United Healthcare has been well publicized. Joe Lanius, Memorial’s chief financial officer, says the conflict with UHC has nothing to do with the health insurance marketplace, as UHC has announced it will not be participating.

“We (healthcare providers and insurance companies) are sort of natural adversaries in some respect,” Lanius said. “And at the same time, we need each other. Things are tightening up and certainly hospitals are trying to make sure they’re compensated for our services.”
Lanius says Medicare and Medicaid payments don’t even cover the actual cost of service. As a result, what’s been happening for years is that providers have looked to employer-based insurance to cover the shortfall.
“Costs get pushed to the employers,” Lanius said. “And now it’s been getting pushed to the employee. It’s a difficult situation.”

Under Sandberg’s pro-growth, pro-expansion leadership, since taking office in November 2010 the firm has expanded its downtown St. Louis headquarters to include four floors at 600 Washington Ave., added 36 new attorneys – now totaling 96 – and expanded its operation to include new offices in Alton and O’Fallon, Ill. as well as Overland Park, Kan. The firm has operated offices in Carbondale and Edwardsville for 10 and five years, respectively.
Sandberg and five other attorneys, including Keith Phoenix and Peter von Gontard, all still with the firm, opened its doors in 1979. Their four main practice areas are: business, business litigation, products liability and health law.
“Growth is a function of our results and how we serve our clients,” Sandberg said. “We have talented lawyers, paralegals and staff who know how to work together to deliver to our clients. Our revenue growth and gross profit growth are right at 50 percent over the past three years. Our profits per partner are up over 25 percent.”
Having celebrated its 34th anniversary Aug. 6, plans are in the works for future expansion into other regions of Illinois and Missouri, according to Sandberg.
Sandberg Phoenix is consistently rated one of the St. Louis area’s top law firms, ranking a coveted spot on U.S. News & World Report’s Best Law Firms national survey as a Top-Tier law firm.
Posted in 2013 September Issue