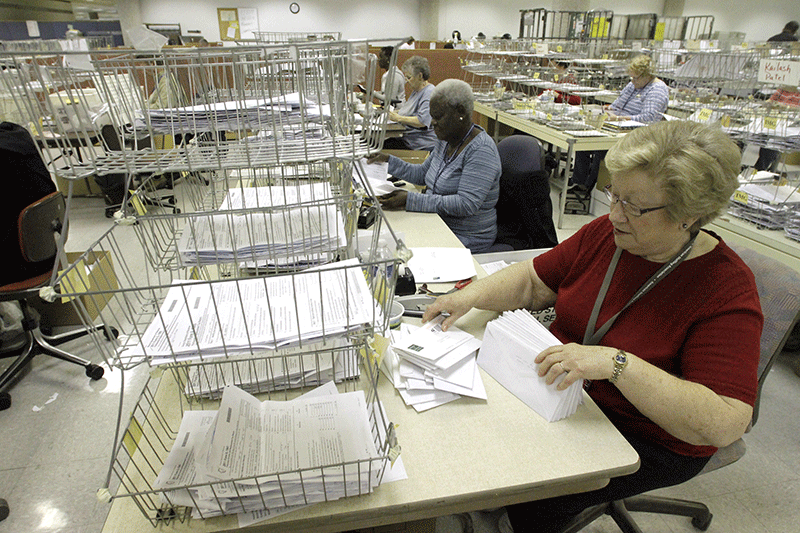 A “surprise” one-time surge of state income tax revenues received in April helped stem the tide, but Illinois still owes a staggering $6 billion worth of payments to tens of thousands of vendors statewide, including those in Southwestern Illinois.
Before an additional $1.3 billion came in during the month of April, the backlog had grown to more than $8 billion.
Among those is Collinsville’s public school district. As of June 24, the state of Illinois owed Collinsville CUSD $1.42 million from the General Fund. Superintendent Bob Green, who heads the district of more than 6,300 students, says that in his 30-plus years of working in education, he’s never seen a more dire financial scenario.
“We’ve spent the last couple of years in deficit spending and we’ve taken action this spring to correct that,” said Green. “Unfortunately, we’ve cut approximately 19.5 full-time-equivalent positions in our district. When someone has retired, instead of being able to consider a candidate with experience, we’re forced to look at who is going to cost us the least. And in negotiations with the (teachers’) union, it’s hard to get an agreement on the table when there’s no money to put on the table. It’s as tough as I’ve ever seen. Do you do what’s best for the kids, or do you do what’s best for the bank account? The continued, long-range effects of what’s going on at the state level are going to be devastating,” he added.
Green remembers back in the 1980s when the state of Illinois – and specifically Southwestern Illinois – endured a brief period of time, four years, when school districts did not receive any new money from the state. “But that was different. We weren’t cut. And we were being paid on time, for the most part,” he said. “Also, the state mandates weren’t what they are now. When you have healthcare costs that are continually going up, utility costs going up, fuel costs going up, plus an increasing number of state mandates – even if they’re good mandates – being imposed upon educators – they take time and money to put into place. And we just don’t have it,” said Green.
Schools in Southwestern Illinois and across the state aren’t the only ones waiting to be reimbursed by the state. Hospitals are waiting patiently for their share of Medicaid reimbursements. Memorial Hospital in Belleville, for example, as of June 24, was owed just over $3 million, according to the Illinois Comptroller’s Office.
Danny Chun, spokesman for the Illinois Hospital Association, says the state’s backlog of overdue payments owed to healthcare-related vendors needs to be considered in context with several factors on the federal level that are or will impact Illinois’ ability to pay in a timely fashion.
“Between the effects of the Patient Protection and Affordable Care Act, the 2 percent cuts due to the sequestration and the fiscal cliff crisis, Illinois hospitals are facing more than $11 billion in Medicare cuts over the next 10 years,” said Chun. “And Medicare is one of the largest sources of revenues for hospitals…in many cases, as much or more as 40 percent.”

Chun adds that the IHA is grateful for the $1.3 billion in unanticipated surplus tax revenues, dubbed the “April surprise,” that the state collected and immediately allocated in April. Comptroller spokesman Brad Hahn says the monies were “a one-time event due as businesses and residents accelerated financial transactions to take advantage of 2012 tax rates.” Those rates, he says, will increase next year, so this was the last chance to get in transactions under the old tax structure.
“We are greatly appreciative of the efforts by Gov. Quinn’s administration, the comptroller, the treasurer and the General Assembly to pay down the backlog of bills because they’ve all made it clear it’s a priority,” Chun said. “But it’s still a really challenging environment. And with the state’s Medicaid program undergoing reform, coupled with more than $280 million in (Medicare) cuts to hospitals made last year, it’s just a very tough time.”
In Illinois Comptroller Judy Baar Topinka’s office, Hahn says the overall policy is to pay bills on a “first-come, first-paid” basis. However, he adds, the comptroller takes every opportunity to encourage vendors to contact the office immediately if they are on the verge of slashing services or shutting down due to state payment delays.
“We will do everything we can to help them stay afloat,” said Hahn. “She (Topinka) specifically prioritizes not-for-profit organizations that serve the state’s most vulnerable residents and have nowhere else to turn. But it is a balancing act, because whenever you move someone to the front of the payment line, someone else is moved back.”
The comptroller’s office receives a 50 percent match from the federal government on most Medicaid payments, says Hahn, so there’s a priority on paying those bills, too.
Other Southwestern Illinois vendors who are owed large balances from the state of Illinois’ General Fund, as of June 24, according to the comptroller’s statistics, include: Southwestern Illinois College, $30.6 million; Edwardsville School District, $1.33 million; Madison County Treasurer’s Office, $1.3 million; St. Clair County Treasurer’s Office, $1.25 million; Belleville Township School District, $1.08 million; Belleville Public School District, $844,122; Fairview Heights City Treasurer’s Office, $390,293, Southwestern Illinois Visiting Nurses Association, $313,493; St. Mary’s Healthcare Center, Edwardsville, $295,184; St. Paul’s Home, Belleville, $249,144.

Tampering with the Charitable Deduction Hurts Communities, Needy the Most