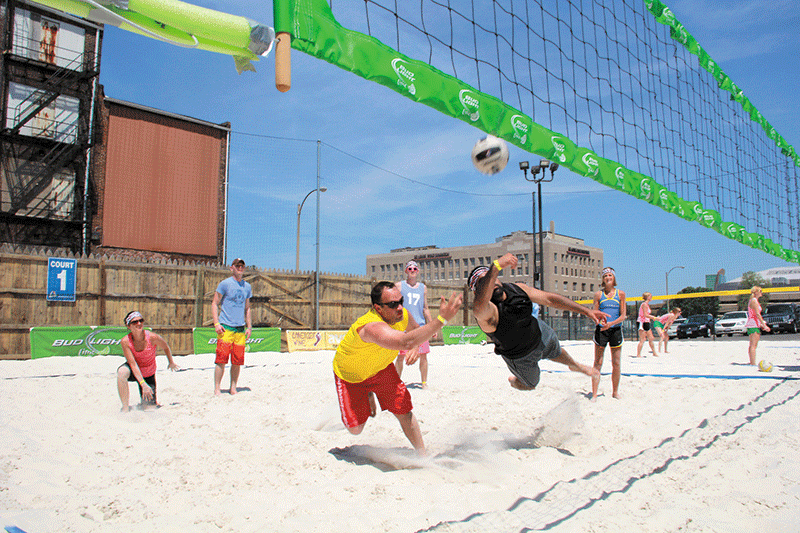 Law firm Sandberg Phoenix & von Gontard P.C. is so committed to supporting charities in St. Louis and Southwestern Illinois that it formed a Charitable Efforts Committee to help organize the many philanthropic interests of its attorneys and staff members.
In 2006, the firm also established the Sandberg Phoenix & von Gontard Charitable Foundation Inc., a 501(c)(3) organization that contributes to the local, regional and national charities selected by the firm’s Charitable Efforts Committee each year.
According to Kathie Opel, a committee member and an associate at the firm, there are 26 Sandberg Phoenix professionals comprising the Charitable Efforts Committee; they meet monthly to organize firm-wide events that raise funds for selected charities.
Each year Sandberg Phoenix sends a letter internally to its firm members, asking for their nominations of charitable organizations based in the greater St. Louis metro area. The committee then votes on the top three charities from the list of nominations to support for the current year. In 2012, Sandberg Phoenix raised $12,000 to support the charities selected by this committee.
“The charities change annually to ensure the firm is having a wide-range impact on the region,” said Opel. “For 2013, the committee selected the Center for Hearing and Speech, Ronald McDonald Charities of St. Louis and Wilderwood Service Dogs. “
“The intention of the Center for Hearing & Speech,” Opel said, “is to provide services that improve the quality of life for individuals with hearing and speech disorders in the St. Louis region, regardless of one’s ability to pay. Firm member Mary Jennings has served as a board member for the Center for two years and currently serves on its fundraising committee.”
Ronald McDonald Charities of St. Louis serves many families who have to travel far from home to get treatment for their seriously ill or injured children. “The treatment may last a day, a month or even longer. It’s a long time to be away from home, or to divide a family,” said Opel, “so the Ronald McDonald House offers families a cost-effective location to reside near the treatment hospital.”
Located in Willisville, Ill., Wilderwood Service Dogs trains dogs to assist individuals with neurological disorders such as autism, dementia, Alzheimer’s, Parkinson’s, Huntington’s, brain injuries and psychological and psychiatric diseases. “The service dogs help individuals gain independence and support,” she said, “and assist with behavioral, emotional and physical aspects of life.”
To financially support these worthy organizations, Sandberg Phoenix plans and executes several fundraising events throughout the year – including an annual bowling tournament in the winter, a sand volleyball tournament in July, a trivia night and a bake auction. “The first annual trivia night was held in April and brought in over $7,000 for our charities,” said Opel.
In addition to the firm’s committee-led efforts, Sandberg Phoenix supports and encourages all firm members to find their own charities to support outside of work.
This philosophy is inspiring for Opel, who is the founder of the Edwardsville-based nonprofit organization, Neighbors in Need. It supports District 7 families in Illinois who experience a medical or emergency crisis. The nonprofit entity provides resources such as mortgage assistance, home repairs and personal necessities to families.
“Neighbors in Need aspires to ease the financial burdens of local families with various needs, while inspiring generosity and goodwill among the residents of the community,” said Opel.
In 2008, Opel and her husband organized The Taste of Edwardsville to raise funds for this nonprofit. The annual Taste of Edwardsville event invites attendees to sample fare from the area’s finest restaurants and enjoy entertainment. Sandberg Phoenix supports Neighbors in Need as a platinum sponsor of the event. This year’s Taste of Edwardsville raised more than $40,000 for Neighbors in Need.
“It is wonderful that the firm supports my charitable work through this event,” Opel said. “What is also unique about the firm is the support and encouragement I receive from my co-workers. Many Sandberg Phoenix members attend The Taste of Edwardsville. It speaks highly of them and of their generosity.”