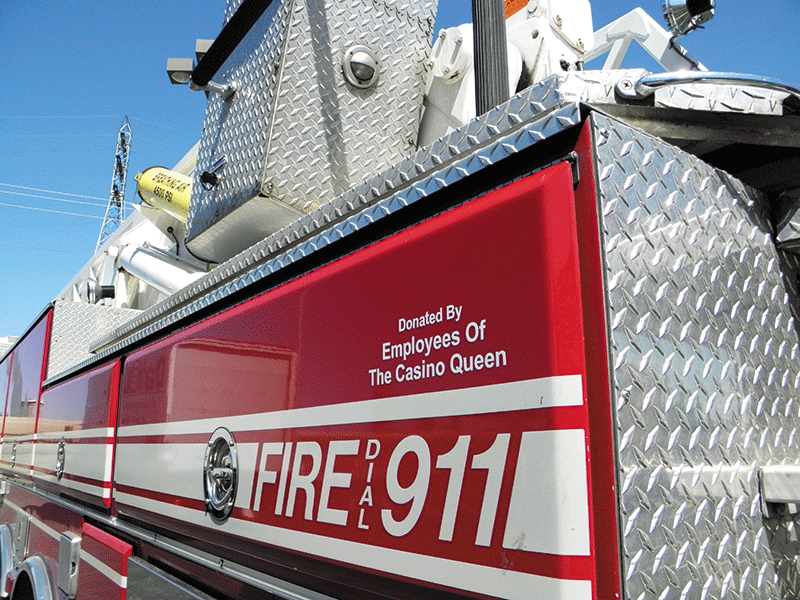 The only employee-owned casino in the nation is celebrating its 20th anniversary by celebrating the profound impact it has made on the city of East St. Louis.
Twenty years ago last month, the Casino Queen’s multi-story paddlewheel sailed into the St. Louis area and made its debut on East St. Louis’ riverfront. Since welcoming its first patrons in June 1993, the total tax revenues generated for the state of Illinois and city of East St. Louis have topped $969 million and are on target to reach $1 billion before year’s end. And that’s just one of many things the new employee-owners of the Casino Queen, and city in which it operates, have to celebrate as they mark this significant milestone, according to Jeff Watson, president and general manager.
Upon its arrival, the Casino Queen was the first major source of new income East St. Louis had seen in nearly 30 years, Watson says. The gaming operation has been a huge contributor to the city of East St. Louis, which has been the recipient of $188 million in gaming taxes alone over the past 20 years, comprising 40 percent of the city’s budget each year. Those dollars, he adds, support many of the city’s vital operations including police force, fire department and public works. An additional $26.5 million in property taxes have been generated over that same time span.
“The Casino Queen is a tremendous corporate citizen for the city of East St. Louis,” said Mayor Alvin Parks.  “Not only has the casino hired hundreds of East St. Louis residents as part of its workforce, which has already bettered many families in this part of the region, but now those employees are the owners of the casino. They are more motivated than ever to ensure that the success the operation has enjoyed for two decades is enduring and continues to bring hope and stability to the city.”
The Casino Queen employs 700 individuals, each of whom became co-owners of the operation on December 26, 2012. Together they share a payroll that totaled $24.1 million last year. Over the past 20 years, more than $645 million in total payroll and $112 million in benefits has been paid by the Casino Queen, some to employees who have been on board since day one or year one.
“We’ve always enjoyed a high level of loyalty among our employees, and we can’t think of a better way to reward them than the ownership stake they each received heading into this anniversary year,” said Watson. “As an employee-owned operation, profits generated by the Casino Queen stay in the community and directly benefit our workforce.”
In addition to investing in its employees, the Casino Queen also has pumped money back into its operations, spending more than $220.8 million in capital improvements over the past 20 years and an additional $366 million on equipment, supplies, services and vendors expenditures. The most visible of the capital improvements came in 2007, when legislative changes made it possible for the operation to move off the river and transition to a land-based facility that addressed all of shortcomings of the original boat.
The casino also has always been an avid supporter of charities, many of them local, and its generous support has added up to more than $10.7 million in charitable donations from 1993 through 2012. Last year alone the Casino Queen made more than $578,000 in charitable donations that are helping to enhance the quality of life for individuals of all ages in East St. Louis and beyond.
“We are happy that the success and growth of the Casino Queen over the years has enable us to have such a significant impact on the region, and we look forward to many more years of being a positive influence on the economy and our community,” said Watson.