Illinois’ metro areas already face unemployment problems, with some of the nation’s worst rates. They could be hit harder by a recession than other places in the nation.

The Danville, Kankakee, Decatur and Rockford metropolitan statistical areas all had unemployment rates higher than 5% in October, with Rockford being the worst at 5.9 percent. All were higher than the statewide rate of 4.6 percent rate – the worst state rate in the nation.

Rockford was ninth worst of the nation’s 389 metropolitan areas. Decatur was 12th worst. Kankakee was 19th. Danville was 24th. Of the 27 metropolitan areas in the nation where the unemployment rate was above 5 percent, four were in Illinois. Only California had more with 10. 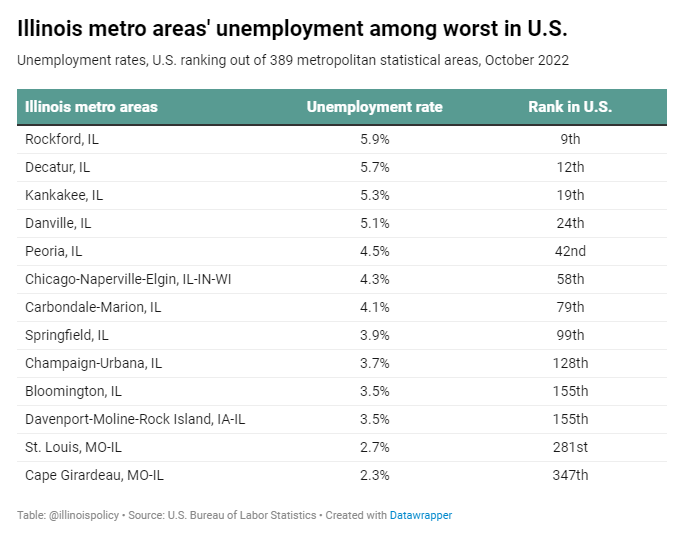 In addition to those areas, the Springfield, Carbondale-Marion, Chicago-Naperville-Elgin and Peoria areas have unemployment rates of 3.9 percent or higher. Those rates are higher than the latest U.S. rate for October, which came in at 3.7 percent. The Champaign-Urbana metro area is tied with the U.S. mark as of October.

One major reason why Illinois metros have been plagued by high unemployment rates is sluggish job growth during the COVID-19 recovery. Only Bloomington, Davenport-Moline-Rock Island and Springfield have more jobs than in January 2020, when employment in Illinois peaked. Meanwhile, Illinois is still missing more than 60,000 jobs.

Despite missing many jobs, Illinois’ recovery trudged on during October as 11 of the 15 metropolitan areas that contain parts of Illinois gained ground in recovering jobs lost during the pandemic, according to data released Dec. 1 by the U.S. Bureau of Labor Statistics. The biggest gain was achieved by the St. Louis area, which is mostly outside of Illinois, adding 5,500 jobs for the month. The best entirely in-state performance went to the Chicago-Naperville-Arlington Heights area as it added 3,000 jobs; Rockford added 1,300; Davenport-Moline-Rock Island added 1,000 jobs; Peoria added 800; Bloomington added 500 jobs; Champaign-Urbana added 300; the Lake County-Kenosha County, Decatur, Kankakee, and Springfield areas all added 200 jobs apiece. 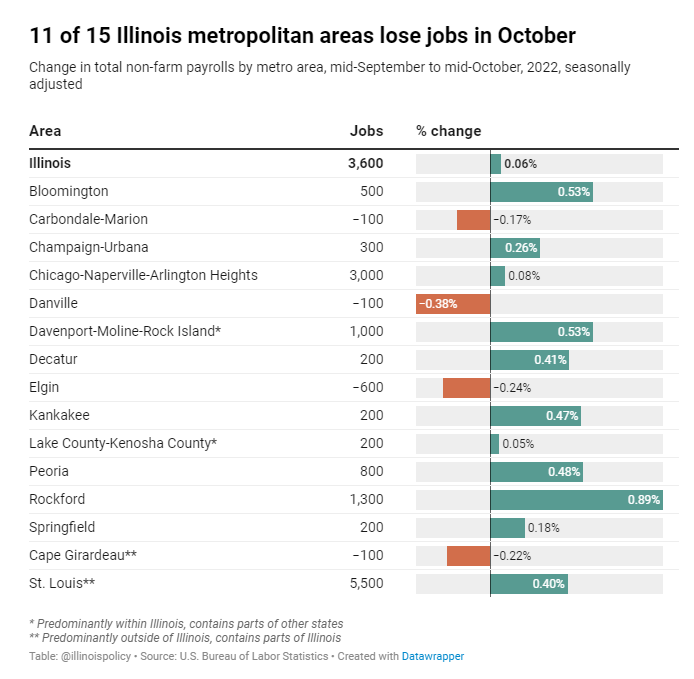 The lackluster job growth and concerning unemployment rates for the state in October comes amid increasing signs a significant economic downturn could be coming soon. The Federal Reserve continued to pursue interest rate hikes in order combat inflation, boosting rates another 75 basis points for November. Inflation remained high at 8.2 percent for September. Interest rates are now the highest they have been since 2008 and the Great Recession, with the Fed continuing to signal more rate hikes are coming, although possibly at a slower pace. It raised its benchmark rate half a point Dec. 14 to a target range of 4.25 to 4.5 percent – the highest rate in 15 years.

Meanwhile, other recession warning signs have been making news recently. Fitch Ratings is expecting a recession by the second quarter of 2023. It stated a recession is likely to be similar to the 1990-1991 recession, which lasted nine months, but is also expected to be milder than the one from 30 years ago. A recent Bloomberg Economics model projects there is now a 100 percent chance of a recession in the next 12 months.

The concerning jobs and unemployment figures are a bad sign for Illinois’ economy should a downturn take place. Illinoisans suffered more than most Americans during the Great Recession. Because the state still hasn’t recovered from the pandemic, it remains vulnerable to suffering more severely than other states should a recession occur.

The state’s pandemic recovery has been hindered by Gov. J.B. Pritzker’s COVID-19 policies, which were more severe than other states and disproportionately hurt workers in the leisure and hospitality sector. Pritzker has continued to extend emergency powers throughout the pandemic, recently issuing his 37th COVID-19 disaster proclamation.

With the passage of Amendment 1, Illinois’ $313 billion pension debt will likely continue to balloon as state and local taxes, which are already among the highest in the nation, rise in an attempt to keep up without reform to the pension system. If property taxes continue to rise at their recent rate, homeowners can expect to pay more than $2,100 during the next four years. Meanwhile, spending on vital programs will continue to be crowded out.

Illinois’ housing and labor markets are already suffering as high taxes and reduced services make finding a job and living in the state tenuous. These problems would be exacerbated should the U.S. enter a prolonged recession. Illinois needs reform that will control the state’s cost drivers and deliver vital support to taxpayers when they need it the most.

Justin Carlson is a Policy Analyst with the Illinois Policy Institute. Before joining the Institute, Justin was involved in political communications in Michigan and has spent the past several years working in manufacturing. He graduated from Lake Superior State University with a Bachelor of Science degree in Political Science with a minor in History in 2013. He also graduated from Johns Hopkins University with a Master of Arts in Public Management in 2019.