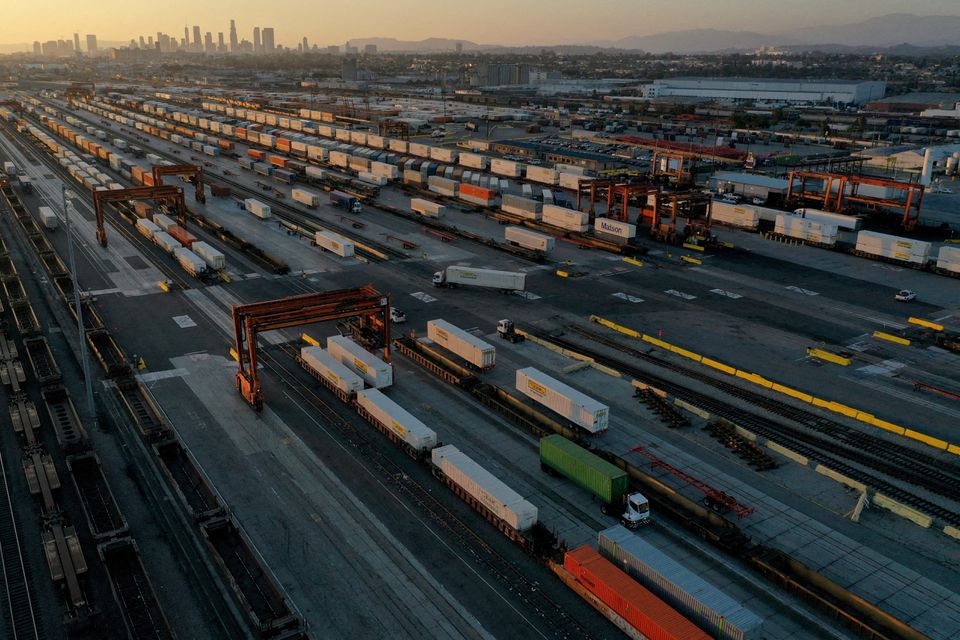 An aerial view of gantry cranes, shipping containers, and freight railway trains ahead of a possible strike if there is no deal with the rail worker unions, at the Union Pacific Los Angeles (UPLA) Intermodal Facility rail yard in Commerce, California, U.S., September 15, 2022. REUTERS/Bing Guan

(REUTERS) – More than 400 groups on Monday called on Congress to intervene in an ongoing railroad labor standoff that threatens to idle shipments of food and fuel and strand rail travelers while inflicting billions of dollars of economic damage.

Workers in four unions have rejected a tentative contract deal announced in September, while eight approved it.

“The risks to our nation’s economy and communities simply make a national rail strike unacceptable,” says the letter to congressional leaders seen by Reuters. “Therefore, absent a voluntary agreement, we call on you to take immediate steps to prevent a national rail strike and the certain economic destruction that would follow.”

A rail traffic stoppage could freeze almost 30% of U.S. cargo shipments by weight, stoke inflation and cost the American economy as much as $2 billion per day by unleashing a cascade of transport woes affecting U.S. energy, agriculture, manufacturing, healthcare and retail sectors.

The letter said a potential strike could result in “interruptions in the delivery of fertilizers, chlorine, and other products essential to clean water, our food supply, and electricity generation.” It warned a strike could halt passenger railroad Amtrak and commuter rail services that “would disrupt up to 7 million travelers a day.”

The White House has called a rail shutdown “unacceptable.” President Joe Biden’s Presidential Emergency Board in August released the framework for the tentative deal forged in September between major carriers like Union Pacific Corp (UNP.N) and a dozen unions representing 115,000 workers.

Unions and railroads have until Dec. 9 to resolve differences. If they do not, workers could strike or railroads could lock out employees – unless Congress intervenes. But railroads would halt hazardous materials shipments at least four days ahead of a strike deadline.