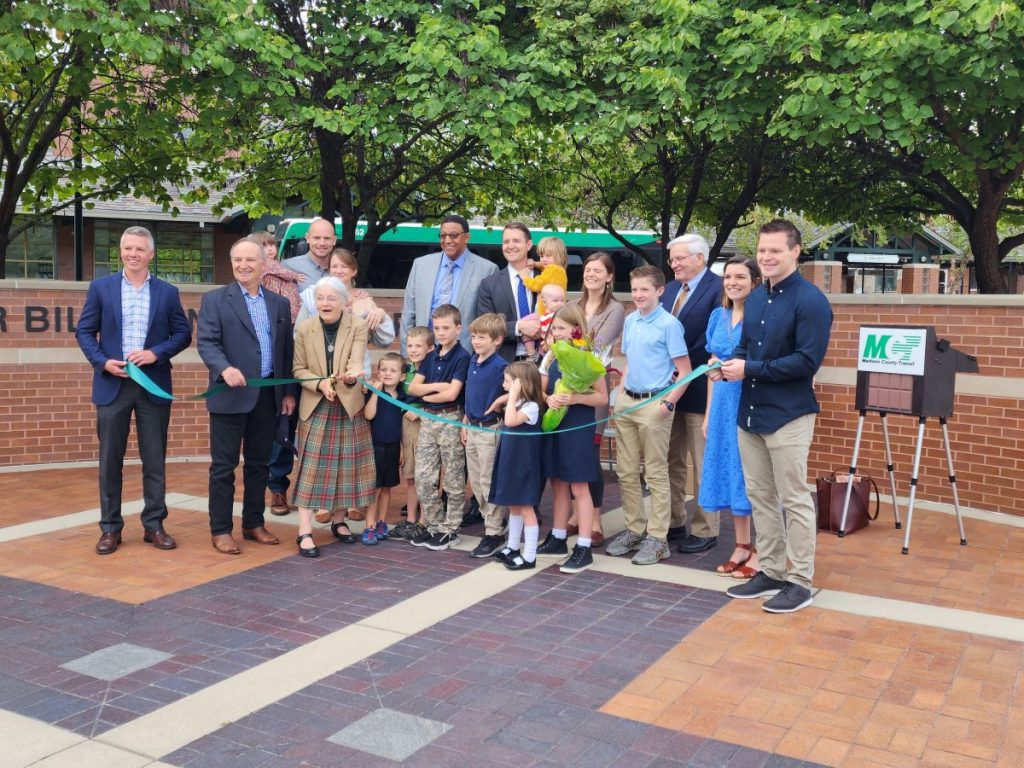 A dedication took place on Friday, Sept. 22, 2022, in Alton: One perfectly symbolic of the indelible marks made on the community, the region, and the state by one selfless servant and his dedicated partner along a full life’s journey.

Together, they were a team, raising a family and strengthening a community – locally, regionally, and throughout the state of Illinois.

Madison County Transit has honored the work of the late Senator Bill Haine and his surviving wife Anna for their unwavering lifetimes of public service with the dedication of its new bus terminal plaza at the Alton Transfer Station as the “Senator Bill & Anna Haine Plaza.”

Located at 6th and Piasa Streets in Alton, the brick-curved structure includes a trail marker that shares their story with all who visit. A bench has also been placed where visitors can rest, perhaps as they wait for their connector transit shuttle to arrive.

The bench features a plaque that reads: “In Memory of Sen. William R. Haine For his Charismatic Leadership as Chairman of the Madison County Transit District during its formative years, 1981-1988.”

Throughout his career, Haine worked for the good of Madison County residents. He served as the first chairman of the Madison County Transit District, as a Madison County Board Member, and as Madison County State’s Attorney before becoming the Illinois State Senator representing the 56th District. Haine’s commitment to promoting and supporting MCT never wavered.

At the Friday afternoon dedication, MCT Managing Director SJ Morrison welcomed those in attendance and made some brief remarks before announcing that a $5,000 annual scholarship had also been established in honor of Sen. Haine and his family. The scholarship will be awarded each year to juniors and seniors from Madison County high schools.

MCT Board Chairman Ron Jedda also took a moment to thank Haine’s family for “supporting Bill Haine as the first chairman of the MCT board.” Several MCT and Agency for Community Transit (ACT) board members were also in attendance.

Next to share some fond memories of Sen. Haine and wife Anna was MCT Managing Director Emeritus Jerry Kane. As Kane told anecdotes that caused many to join in with Anna Haine’s hearty laughter in response to the stories he shared, Kane also noted, “Bill always had a place in his heart for the district and the people he served. He was always trying to make things better for his constituents.” 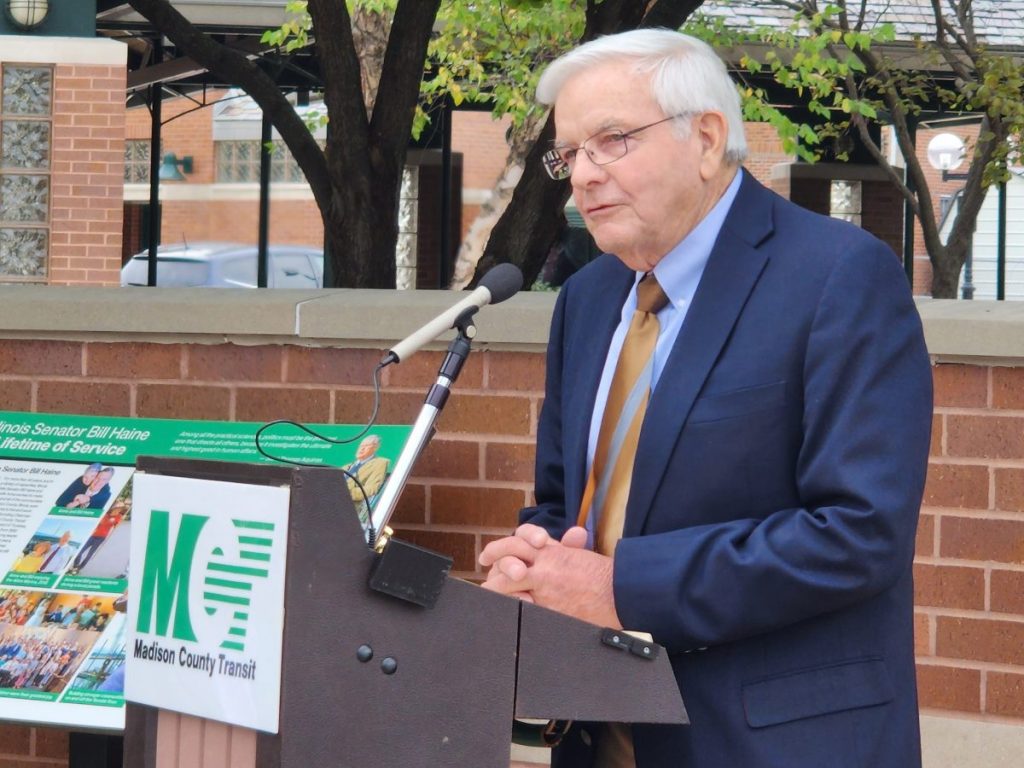 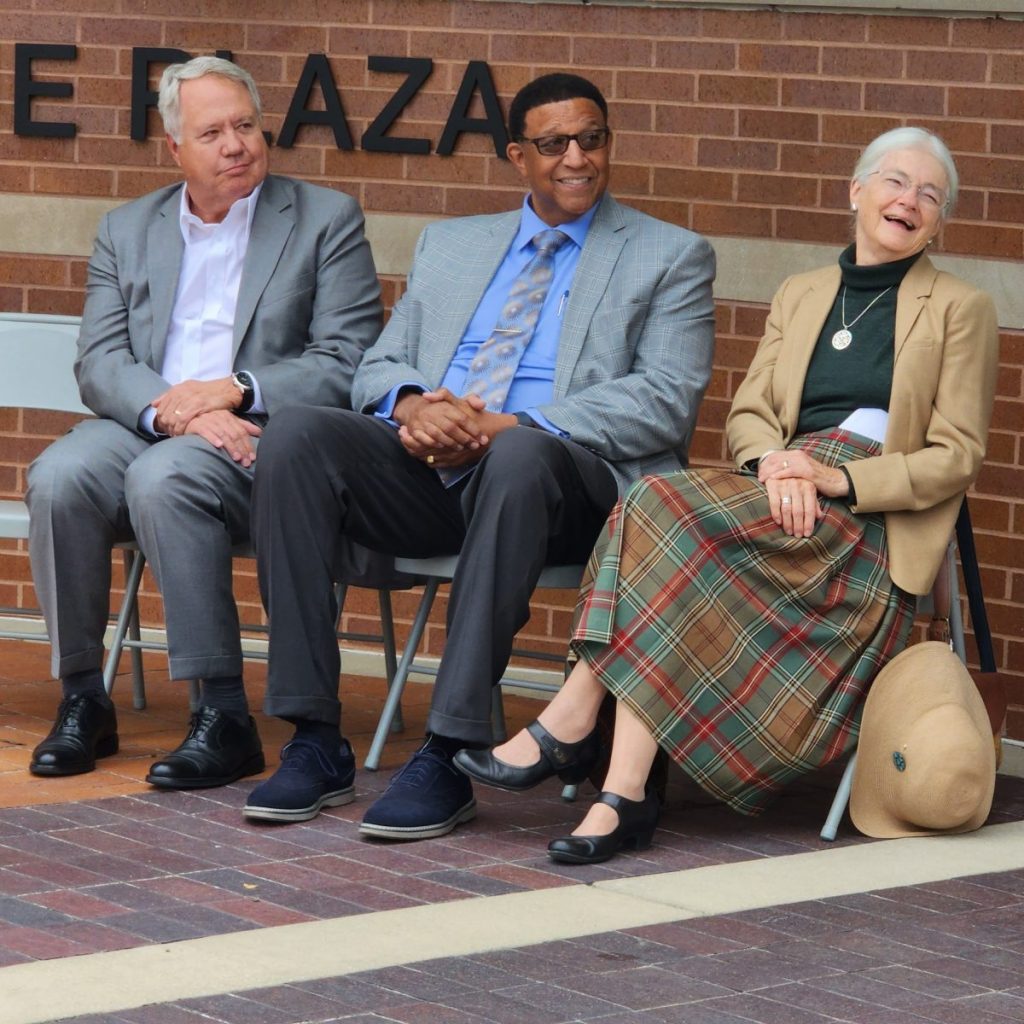 Hoffman noted, “I can tell you every single day that I go to Springfield and he’s not in the Senate, he is missed.”

Goins told how came to know Haine while working as a patrol officer with the Alton Police Department. He shared that he had received a call about a potential jumper on the newly erected Clark Bridge. 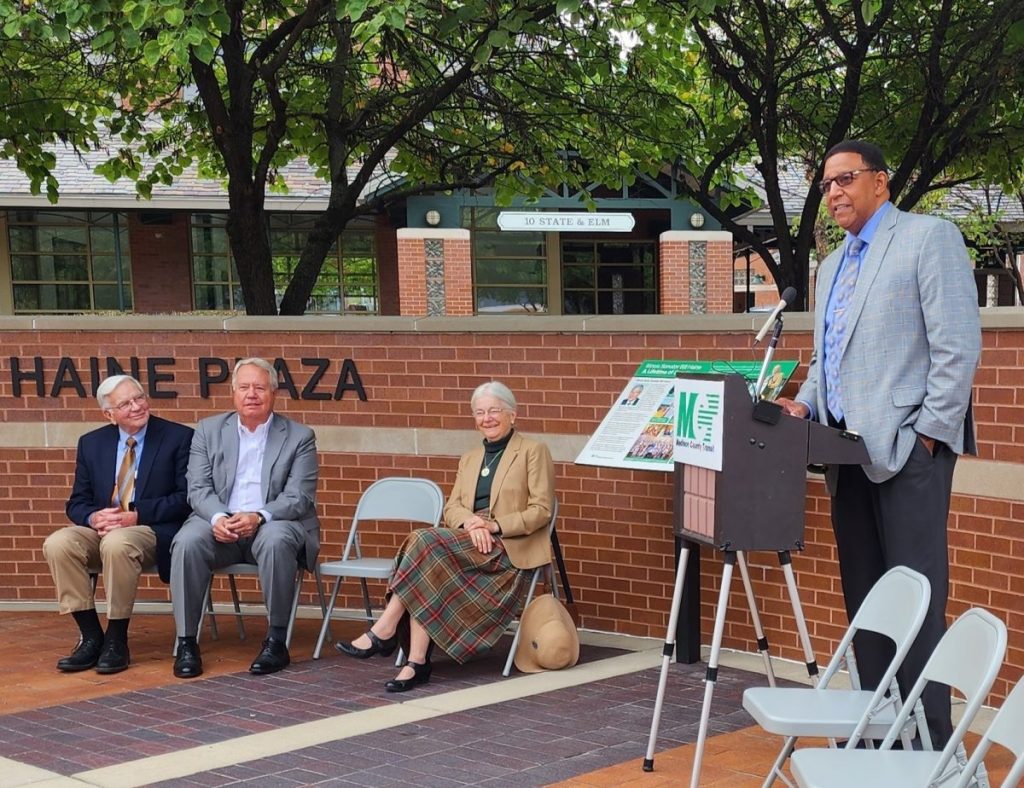 “I see this bicycle at the side nearby, and then there’s this young lady sitting in this crossed legged yoga pose,” Goins said. “I asked her, ‘What are you doing here?’ and she replied, ‘Oh I’m just enjoying the sunset.’ And I said, ‘Well, you can’t enjoy the sunset right here.'”

That young woman happened to be Bill and Anna Haine’s daughter. “Every time I ran in to Bill, he would always apologize,” Goins further noted. “That’s how our relationship started.”

Several Madison County officials were on hand to mark the occasion, including Madison County State’s Attorney Tom Haine, son of Bill and Anna. Many other generational members of the Haine family were present to honor their family’s leading duo and their public service legacy.

Anna Haine was the final speaker to take the podium, sharing her words on behalf of the entire Haine family. She said that when she and Bill married in 1971, “He was a young man in law school who dreamed of making public service his life’s goal.” 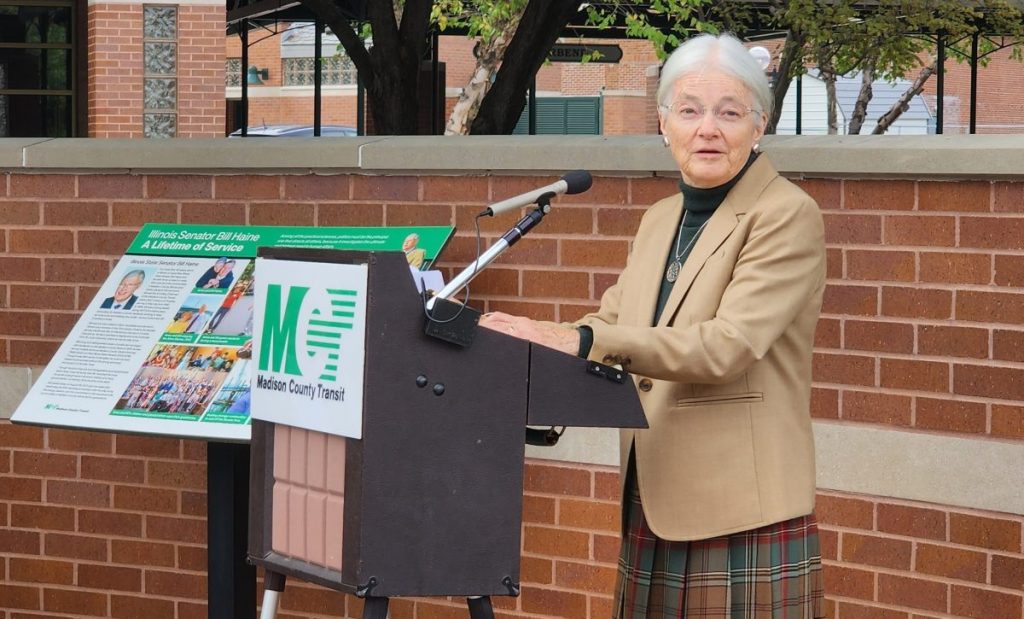 “One of the things that always impressed me about him was his acute sense of his responsibility for the wellbeing of the community,” she added. “He was always ready to go the extra mile.”

Anna further shared that, early on, Bill kept his political career close to home so he could be close to the family, but as the family grew older, taking his career “a little further away from home” became acceptable. The couple shared 50 years of marriage before Bill’s death, she said, with 7 children and “41, soon to be 42 grandchildren.”

Bill Haine was elected to the Madison County Board in 1978, a post he held until 1988. He was then elected as Madison County State’s Attorney in 1988. He resigned that post to become state senator in 2002. Haine left the Senate in 2018 and was serving on the Illinois Board of Elections at the time of his death.

The former Illinois State Senator from the 56th District, who had dedicated his life to his family, his constituents, and to serving the county, region, and state of Illinois through a career in public service with unwavering support from his lifelong partner Anna, Bill Haine, 77, passed away at his home early in the morning of Aug. 16, 2021. With the establishment of MCT’s Sen. Bill and Anna Haine Plaza in Alton, however, their story will live on, as it already does in the hearts of their family and so many others. 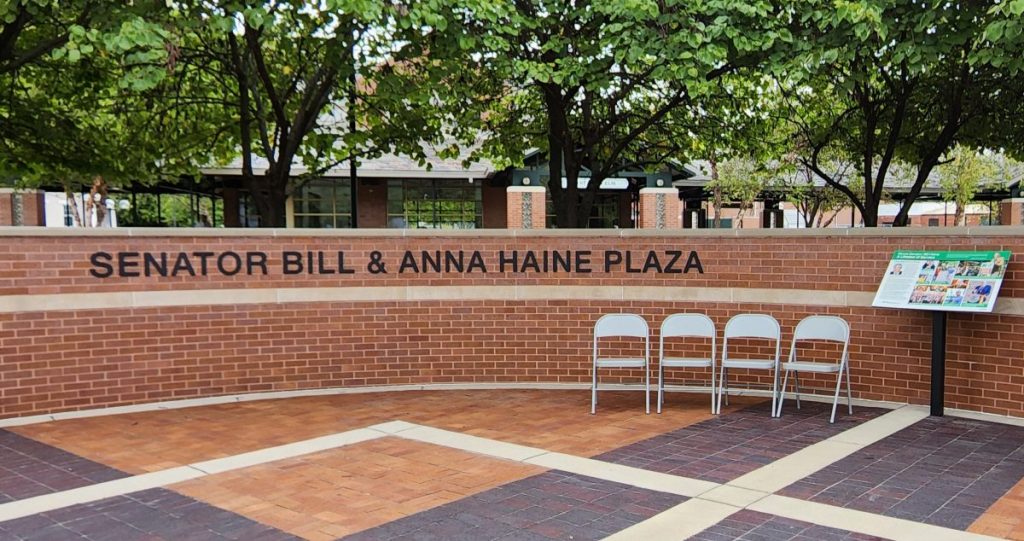 This story also appeared in the October 2022 print edition of the Illinois Business Journal.

1: Members of the Haine family were joined by other guests and dignitaries in attendance to cut the ribbon and officially debut the Senator Bill & Anna Haine Plaza at MCT’s downtown Alton bus terminal on Friday afternoon, Sept. 22, 2022.