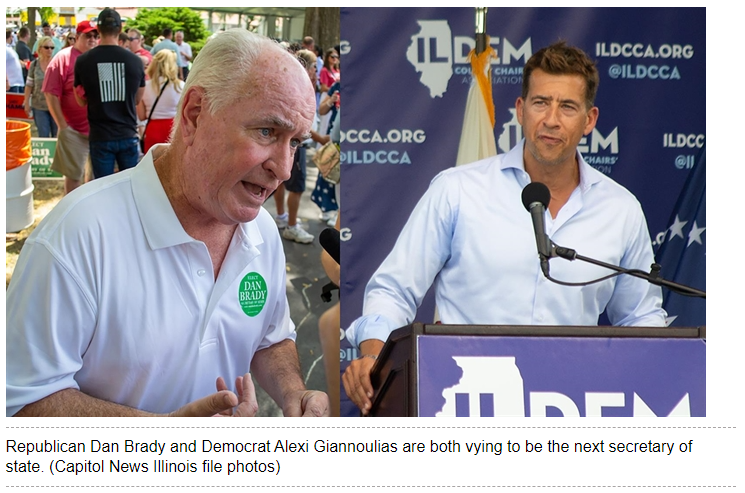 Secretary of state candidates Alexi Giannoulias, a Chicago Democrat and former state treasurer, and Dan Brady, a Republican state representative from Bloomington, each spent 45 minutes before a panel organized by the Illinois Associated Press Media Editors in recent weeks.

A full story about their plans for modernizing the office can be found here, but here are some of their stances and statements regarding elections, libraries and other topics.

ELECTIONS: In Illinois, the secretary of state’s office doesn’t have much to do with elections, aside from administering the state’s automatic voter registration program. Most election administration is done through the Illinois State Board of Elections.

Giannoulias said he would like to make the automatic registration system one that voters have to opt out of when they get a driver’s license or ID, rather than one they must opt into. He’d also like to pass legislation allowing pre-registration for 16- and 17-year-olds.

On the topic of election integrity, he said his office would “continue to push back on dangerously false election deniers.”

Brady, meanwhile, said he’d like to coordinate the secretary of state’s death record database with its driver’s license system and voter rolls to purge those systems of information on deceased individuals. He’d also like to partner with local election authorities to ensure elections and mail-in voting run smoothly.

He said he didn’t believe there was rampant voter fraud and he believed Joe Biden to be the rightly elected president. But he also said the secretary of state’s office currently provides signatures to election authorities so they can match them with a voter’s signature, and he’d look to provide driver’s license photos with those signatures.

“Certainly, we have to have permission which that voter would allow, an individual would allow, a picture from their ID card or their driver’s license,” he said. “But that would certainly give a more enhanced visual for an election judge and, secondly, would cut down on any type of discussion or debate, if you will, on whether that’s truly his or her signature.”

Giannoulias said he’d try to work with lawmakers to give the office authority to negotiate fees charged by publishers to libraries for the use of their materials. He said as secretary he’d do everything in his power, “whether it requires legislation, whether it’s using the bully pulpit of our office,” to eliminate book bans. He’d also try to visit as many of the state’s libraries as possible.

ORGAN DONATION: One of retiring Secretary of State Jesse White’s major initiatives was increasing organ and tissue donation participation. Brady said he worked with White on issues such as expanding that program to 16- and 17-year-olds.

His experience working with the secretary and serving as coroner in McLean County and as partner in a Bloomington funeral home give him insight as to how he can improve the program further, he said, noting efforts to educate the public could be improved.

Giannoulias said education could improve there as well, especially in minority communities “that don’t really trust the system or there’s a stigma culturally in certain communities.”

“So I think getting out to these communities and reinforcing the power of organ donors and how it can literally save lives will be crucial,” Giannoulias said.

Giannoulias said he’d look to use the “bully pulpit” of the office to better educate Illinoisans on safe and distracted driving, but he also noted he’d consider working with lawmakers for new, unspecified laws to improve safety. Otherwise, he said, much of it comes down to enforcing current law.

75-PLUS DRIVER TEST: Both candidates said they would consider changes to Illinois law as it pertains to mandatory on-road driving tests for individuals aged 75 and older.

“I have certainly said that I would look at that particular policy barring some type of medical issue with those individuals,” Brady said.

Giannoulias said he’d examine studies on this issue, but road safety would be paramount.

“And the operations of the office, from the index division to just trying to become a notary public, to Capitol security we’re talking about, there’s areas and room for improvement,” Brady said. “And I think it really starts with having a secretary who’s going to be engaged and involved on a daily basis on some of these major issues.”

He noted he’d solicit advice from current employees, which he said he’s learned in the General Assembly often have the best ideas for improving things.

Giannoulias specifically noted he’d like to hire more investigators, auditors and lawyers in the securities division. He’d also like to improve ethics laws when it comes to lobbying and spouses of elected officials lobbying.

While Giannoulias said he’s a believer in requiring more transparency from elected state officials, he doesn’t plan to release tax returns, because “my wife and I have some things that she wants to keep private, which I respect.” He noted he’d fill out all required disclosure reports. Brady said he would release tax returns, but he had not done so as of Wednesday.

Giannoulias said he’d also like to “make it as easy as possible” to start a business by improving the state’s business services division. He also said he’d look to repeal a law making it illegal to hang objects on a rearview mirror and look to make it easier for people exiting prison to obtain a state ID.