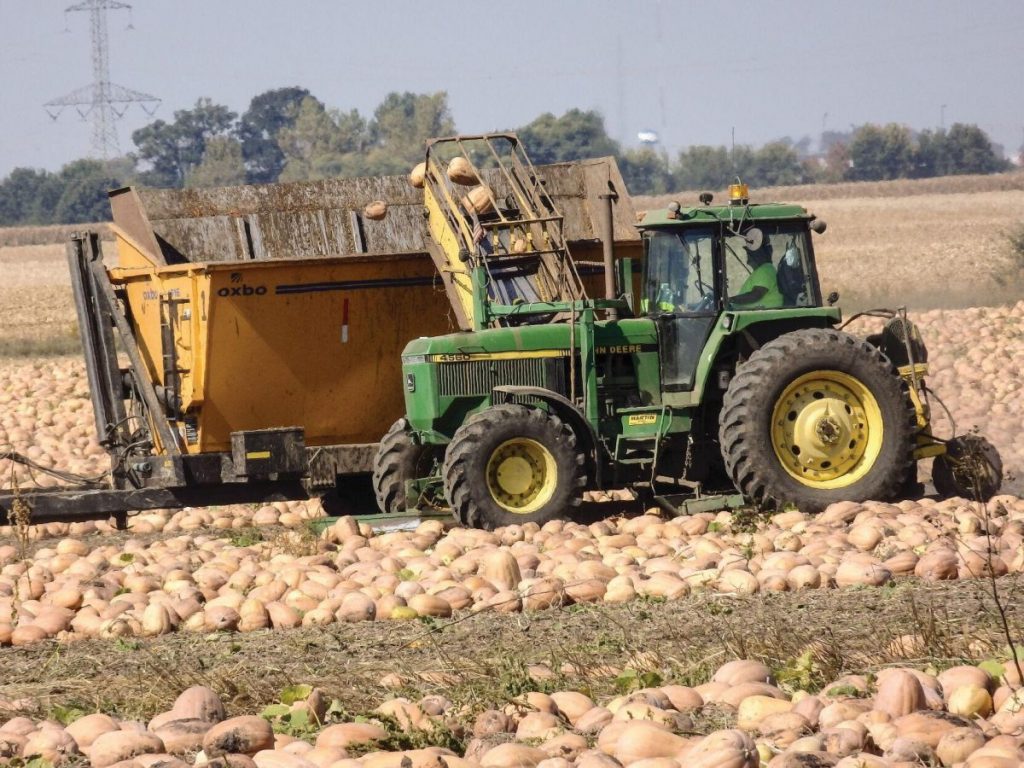 Commercial pumpkins are harvested for canning purposes near the Nestle/Libby’s plant in Morton. Pumpkin yields in the area are around average this season, according to David Uhlman, a grower from Tremont. (FarmWeek file photo)

Pumpkin harvest ramped up a little early this year in some parts of the state as growers responded to the threat of late-season rains and the first frost this fall.

Rains late in the season can cause fruit rot in pumpkins while the arrival of the first frost generally reduces the quality of commercial pumpkins grown for the processing market, according to David Uhlman, a farmer from Tremont.

Uhlman grew commercial pumpkins under contract for Nestle/Libby’s this season. This year marks his 44th crop year and it’s the 42nd season he’s grown processing pumpkins for the Libby’s plant in Morton.

“It’s a field-to-consumer crop. I appreciate being in a market such as that,” Uhlman said. “It’s been a very good crop rotation for me and diversification of crops and markets.”

Uhlman planted his processing pumpkins a touch later than he would have liked this season – the third week of May – but Libby’s already completed harvest on his farm by Sept. 19.

“Germination went well and quite frankly with the drier season we had we were pretty excited about pumpkins. They had less disease pressure and we had enough rain that the herbicides worked well,” Uhlman said.

“They (Libby’s) harvested mine a little earlier this year because of some fruit rot in the fields because of some late rains,” he noted. “In my area there’s quite a bit of noticeable fruit rot, so they tried to be as timely as possible (with pumpkin harvest) this year.”

Libby’s typically contracts 6,000 to 7,000 acres of commercial pumpkins near its canning plant in Morton each year. Yield averages increased to around 27 tons per acre in recent years but could be down a touch this year to around 25 tons, Uhlman said.

Uhlman discussed the harvest of commercial pumpkins on his farm this season.

“I spoke with the harvesting crew and they’re noticing no record-breaking yields this year,” he said. “But they are pretty comfortable there’s enough acres contracted to be able to meet the demand of the market.”

Libby’s typically produces more than three-quarters of the commercial pumpkins canned in the U.S. at its central Illinois facility, earning Morton the longstanding, unofficial title of “Pumpkin Capital of the World.”

While the commercial pumpkin harvest appears adequate, yields of ornamental pumpkins have been quite variable around the state due to wild weather fluctuations this season.

John Ackerman grew 160 varieties of pumpkins in every color and size this season on his farm near Morton. He started growing commercial pumpkins for Libby’s in 1983 and opened his farm up to the public to sell ornamental pumpkins in 1999.

“The pumpkin crop is really good this year. It was really dry in this part of Tazewell County. They responded well to those conditions,” Ackerman said. “But I’ve had people call me from other parts of the state looking for pumpkins. There’s some disaster crops (caused by heavy rains and flash flood events).

“Pumpkins are a fickle plant. The vines are along the ground, so when it’s too wet there’s a much greater chance they’ll get a disease or fungus,” he said. “The timing of rain also makes quite a difference with pumpkins. Sometimes you have a good crop but then it rains and once in a while it triggers the pumpkin plant to abort fruit.”

Ackerman is in the thick of fall pumpkin sales on his farm. It’s open during the season from 9 a.m. to 6 pm Monday through Saturday and from noon to 5 p.m. on Sundays.