SPRINGFIELD – Gov. JB Pritzker has signed 401 bills sent to him this calendar year, leaving just 10 of those passed by lawmakers this year awaiting his action as of Monday.

His most recent crop of signed bills from Friday, June 10, included a measure taking aim at wage theft in the construction industry and a pair of bills aimed at increasing access to treatment for HIV.

The wage theft measure, House Bill 5412, was a major initiative of a regional carpenters’ union that allows a worker with a wage theft or fringe benefit grievance against a subcontractor to sue the primary contractor to rectify the situation.

The Mid-America Carpenters Regional Council was the main backer of HB 5412. Minority contractors lobbied against the proposal, which they said would drive up costs and limit work opportunities for smaller contractors.

The minority groups, including the Hispanic American Construction Industry Association, the Black Contractors Owners and Executives, and the Federation of Women Contractors, argued that the measure was a union attempt to drive up the cost of non-union labor.

A follow-up measure, House Bill 4600, was also signed Friday. It exempts any renovations or repairs to existing residential structures, any project that costs less than $20,000 to complete, and construction on any single unit within a multi-family dwelling. It also created the Bond Reform in the Construction Industry Task Force to report to the General Assembly by March 1, 2023.

The laws took effect upon the governor’s signature.

HIV Treatment: House Bill 4430 allows pharmacists to order and conduct testing and dispense pre- and post-exposure HIV medications to individuals who are at high risk for infection. The law takes effect Jan. 1, 2023.

The pharmacists would need to have a standing order issued by a licensed physician or county health department that would allow them to offer care for the individual seeking help, but it would not require a prior patient referral.

The law also requires pharmacists to receive training and specifies that insurance providers must cover the treatments provided by a pharmacist at the same rate as treatment from a physician.

The governor signed that bill the same day he signed House Bill 5549, which requires that for every $3 million in the state’s special African American HIV/AIDS Response Fund, the fund must maintain at least one Black-led Center of Excellence HIV Biomedical Resource Hub. Its fund balance was $4.5 million as of Monday, according to the Illinois Comptroller’s database.

It expands existing law that allows 10 days of unpaid leave for workers suffering losses, and the new law expands the list of individuals for which a worker can take the leave.

The measure didn’t specify an effective date, meaning it will go into effect on Jan. 1, 2023.

Health care visits: Senate Bill 1405 requires that a health care facility must ensure “an opportunity for at least one visitor to visit a resident or patient,” even amid a gubernatorial disaster declaration. A clergyperson would not count against the limit. It became effective when signed on May 27.

Health safety guidelines set by the facility, U.S. Centers for Medicare and Medicaid Services, and the Centers for Disease Control and Prevention would still apply. The person seeking entry may be required to pass a health screening and denied entry if they fail it.

Rep. Chris Bos, R-Lake Zurich, the bill’s chief House sponsor said in April it was in response to constituent anger over Pritzker’s COVID-19 executive orders. Bos said facilities would still have to comply with local health department guidance as well.

The bill is designed to expand on the Overdose Prevention and Harm Reduction Act, passed in 2019. That law authorizes government agencies and nongovernmental organizations to create needle access programs aimed at reducing HIV and other bloodborne diseases.

The Illinois Board of Higher Education and Illinois Community College Board will guide implementation of the new equity plans. HB 5464 took effect when signed on Tuesday, June 7.

Vegan lunches: House Bill 4089 requires school districts to provide a plant-based lunch option that complies with federal nutritional requirements to any student who submits a prior request to the district asking for such an option. The law takes effect in August 2023 and was signed May 13. 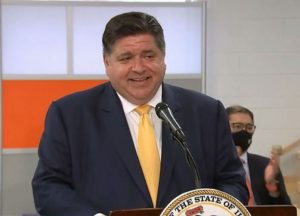