Names to be added to memorial at Statehouse

SPRINGFIELD – As rain steadily fell in Springfield Thursday morning, there was a somber feeling among the law enforcement officers and elected officials that gathered at the Illinois State Library to honor 11 fallen officers killed in the line of duty in 2021.

“I have a heavy heart when I think about the loss of these 11 individuals, it’s a sad day for all of us,” Secretary of State Jesse White said. 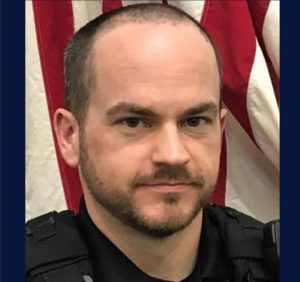 Family members of the fallen officers were presented with plaques from Gov. JB Pritzker and received a wreath to commemorate their loved one.

Amber Oberheim, widow of Officer Neil Oberheim, said in a follow-up interview that the event speaks volumes to lawmakers and elected leaders because when someone loses a loved one while on duty, they all feel it.

“I think the sheer magnitude of people who were here with an expectation for some change and support for law enforcement, I think will speak volumes, hopefully, to our leaders,” she said.

Officer Oberheim was shot and killed on May 19, 2021, at 3:20 a.m. while responding to a domestic disturbance call at an apartment complex in Champaign. He served with the Champaign Police Department for 13 years.

In an emotional tribute to fallen officers, Comptroller Susana Mendoza said the job is too often thankless and the individuals “willingly choose to take an oath to protect and serve” people who they have never met and are willing to give their life to protect others.

“This is a horribly difficult and painful thing,” Mendoza said.  “There’s nothing any of us, certainly not us politicians, can say to make you feel better.”

Mendoza said she believes it’s important that all officers take care of their mental and physical well-being due to the toll the job can take.

She shared the story of her brother, who worked at the Chicago Police Department for more than 20 years on third shift, didn’t always make the healthiest lifestyle choices and was diagnosed with type 2 diabetes.

In November 2020, Mendoza said her brother was hospitalized for more than 17 days with COVID-19 and struggled with life-threatening conditions, such as a stroke and losing both kidneys. She said he survived and is slowly recovering but that his life will never be the same.

Mendoza said she wants every officer to understand that “you’re human and it’s okay” to ask for help when needed and to lean on others for support, and that mental and physical well-being should be the utmost priority.

Speakers went on to give thanks to officers for making immense, and even sometimes ultimate, sacrifice to protect those in and around their community.

According to a news release from the Illinois State Police, Weist was responding to an emergency call about an individual with a gun at a Circle K Gas Station in Galesburg when he was hit and killed by the suspect vehicle as he was setting out spike strips.

“Each of these officers’ communities has been forever altered, teams forever bereaved, families that will never be made whole again,” Pritzker said.

The names of the fallen officers will be engraved on the memorial statue that sits on the west lawn of the State Capitol.