With less than 100 days until the green flag waves at the start of the inaugural NASCAR Cup Series race at World Wide Technology Raceway on June 5, Gov. JB Pritzker and the Illinois Department of Commerce and Economic Opportunity announce the race’s official name: “Enjoy Illinois 300,” sponsored by the Illinois Office of Tourism. 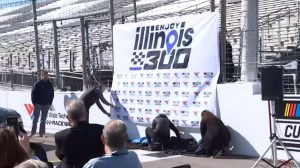 “The Enjoy Illinois 300 establishes Illinois’ own World Wide Technology Raceway as the country’s standout track for stock car, open-wheel, and drag racing alike,” said Pritzker. “I promised to be our state’s best Chief Marketing Officer, and with the return of NASCAR to Illinois, visitors from around the nation have yet another reason to come explore all that Metro East has to offer. This is an incredible opportunity to showcase Illinois and we look forward to welcoming NASCAR fans to our great state.”

The NASCAR Cup Series is enjoyed by millions of viewers across the globe nearly year-round – at the track, on television and through robust digital platforms. These events are credited with delivering millions of dollars annually to host communities. An economic impact study recently completed by The Rawlings Sports Business Management Department at Maryville University projects that this NASCAR Cup Series event will produce at least $60 million in economic impact for the region, attracting more than 83,000 fans.

“As we prepare to host the largest spectator event in the state, we are thrilled to partner with the Illinois Office of Tourism to deliver the best Illinois has to offer,” said Curtis Francois, owner and CEO of WWTR. “We have worked in close collaboration with officials from the Metro East and St. Louis to create one of the nation’s premier destinations for the motorsports industry and its incredibly passionate fans, and I look forward to hosting them for this historic race weekend.”

“We are excited to partner with WWTR to become the title sponsor for the Enjoy Illinois 300, the inaugural NASCAR Cup Series race at this track,” said Sylvia I. Garcia, acting director of DCEO. “This is an incredible opportunity to drive economic development and tourism in the Metro East region and we look forward to attracting visitors from around the country who will travel to Illinois for race weekend and see all our great state has to offer.”

The week will feature several other events, such as: the World of Outlaws Late Model Series at nearby Tri-City Speedway in Pontoon Beach, Illinois, on Friday, June 3; the NASCAR Camping World Truck Series Toyota 200 on Saturday, June 4 and conclude with the Enjoy Illinois 300 on Sunday, June 5.  There will be live entertainment from local, regional, and national musicians all weekend at WWTR.

Race week will officially kick off on Thursday, June 2, with a NASCAR hauler parade through downtown St. Louis, which will cross the Mississippi River and arrive at the track, officially commencing the start of Cup Series race festivities – bringing together communities in both states to celebrate the arrival of the NASCAR Cup Series drivers and teams.

“From the minute the opportunity came on our radar, Governor Pritzker and the Department of Commerce and Economic Opportunity joined me in making the case to NASCAR that St. Clair County would be the right place for a Cup Series Race” said Rep. Jay Hoffman, D-Belleville. “The fact that the race will be called ‘Enjoy Illinois 300’ is a testament to Illinois’ commitment and excellence when it comes to executing large-scale events. I look forward to welcoming tens of thousands of NASCAR fans to the Metro East as they come see everything we have to offer.”

“The more than 250 annual events at WWTR have been a tremendous tourism driver for the state,” said Karla Flannery, Deputy Director of the Illinois Office of Tourism. “As the only racetrack in the U.S. to host the elite series from each of the three major race sanctioning bodies – NASCAR, INDYCAR and NHRA – hundreds of thousands of visitors support this multipurpose venue each year. We are proud to support the continuing economic growth and development at WWTR as it evolves into a vibrant multi-faceted entertainment district.”

“World Wide Technology Raceway is an economic engine for Madison County – not only during race weekends but throughout the entire year. In a recent report conducted by Tourism Economics and Sports Tourism EPA, it was revealed that the sports tourism industry accounts for over $45 billion of direct spend economic impact nationally, and generates over $14.5 billion of tax revenue, nearly $7 billion accrued by state and local governments. In addition to the significant direct financial impact, these sporting events become a source of civic pride and improve the quality of life locally with improved infrastructure and business recruitment and retention.

“We have the perfect location in Great Rivers & Routes of Southwest Illinois for outdoor recreation and sports tourism. Easy access by car; competitive pricing; safe and secure communities and facilities; open spaces filled with hiking and biking as far as the eye can see.

“Sports tourism is an economic driver for Madison County and all of us at Great Rivers & Routes Tourism Bureau look forward to working with the raceway to develop additional sports tourism products,”  Jobe said.