Chief Judge William A. Mudge announced Friday that he is retiring at the end of his term on Dec. 4, 2022.

Mudge obtained his law degree in 1985 from Saint Louis University School of Law. After serving as an assistant state’s attorney, he was a partner at Lucco, Brown and Mudge, a private general practice law firm in Edwardsville, for 16 years. He is licensed to practice in both Illinois and Missouri. 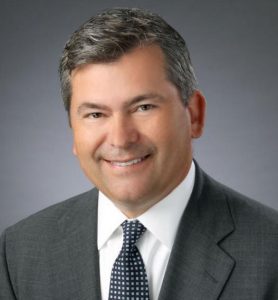 Including his time as an assistant state’s attorney and as a part-time assistant public defender, Mudge served the citizens of Madison County as state’s attorney for eight years from 2002 to 2010. In 2010 he was elected circuit judge, and was retained for another six-year term in 2016, and was later elected chief judge in 2019.

His retirement will bring to an end 25 years of public service in those capacities.

“My professional career has been incredibly rewarding. I was privileged to be a law partner with Bill Lucco and Joe Brown – two of the best human beings and lawyers anyone could have been lucky enough to be associated with,” said Mudge. “They, along with my step-father Jim Gorman, were my mentors. It could not get any better than that.” “My years as Madison County’s State’s Attorney were fulfilling. The office enjoyed a record-setting run of trial success during those years due to the talented men and women who worked with me. It was a great place for lawyers to obtain trial experience and grow professionally, and many of them have risen to be respected as some of the best judges, lawyers and prosecutors in Southern Illinois. I’m proud to have worked with all of them.

“Finally my years as a Circuit Judge in the Third Judicial Circuit could not have been more rewarding. Some of the most highly regarded lawyers from here and around the country, representing all walks of life, tried a wide variety of civil cases in my courtroom. I have been honored to wear the robe and administer justice fairly and impartially for them and the people of Madison and Bond counties. It has also been an honor and privilege to serve alongside my fellow associate and circuit judges as well as with our dependable bailiffs, clerks and staff. They are hard-working public servants and are dedicated to the pursuit of justice.” “But it is time for someone else to have an opportunity to serve and for me to move on to a new chapter in my career. I am gratefulto the citizens of Madison and Bond Counties for entrusting me with the responsibility to serve them fairly and impartially.”

Mudge’s announcement creates a vacancy that will be filled by the will of the people in this November’s General Election.