A historic landmark in Uptown Collinsville has new owners who are bringing it back to life for the entire city to enjoy.

The Schroeppel-Brown House, located at 317 West Main St, was purchased by Jeremey Martin and Bailey Lutz in December of 2021. The land where the three-story Queen Anne style house sits now was purchased by Gustav Schroeppel in 1905 and he finished building the house in 1908. Schroeppel ran his medical practice out of the first floor and lived on the second floor for 25 years until his death. Across the street, Schroeppel’s brother Martin founded Schroeppel Undertaking. That building is currently home to Allan & Ciuferi Funeral Home. 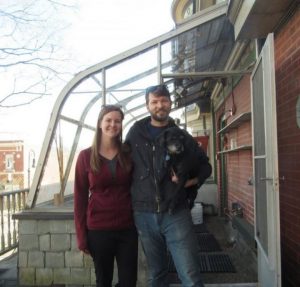 After Schroeppel’s death, Dr. Wendell Brown moved into the house, running his medical practice on the first floor and living on the second floor for 49 years. In 1954, Brown added a greenhouse off the second floor, modeled after the Cullop Jennings greenhouse on Clay Street.

Another unique feature of the house is a small elevator that was added in 1957.

The most recent business to be housed in the space was the Flower Basket which closed in 2017, owned by Steve Conners and Mike Ellis.

The building sat vacant for several years until Ryan Schroeder purchased the house and began tearing out some of the extra rooms that Brown had put in to customize his office space, as well as an apartment he had built on to the back for his mother. He was unable to complete the renovations and put the building back on the market.

Martin originally tried to purchase the building at that time, but he and Lutz were not yet ready to take on the challenge

Once the restoration is complete, Martin and Lutz plan on renting out the first floor as retail and event space and live on the second floor.

To help make the renovations easier, the house came with the original blueprints, receipts and correspondence that Schroeppel had saved, as well as the blueprints from Brown’s renovations.

Because the house has been a fixture in the city for over a century, many residents have brought memorabilia of the previous homeowners. The information, including an invoice from Schroeppel are helping the couple create a history of the house. They are also frequent users of the files at the Collinsville History Museum across the street.