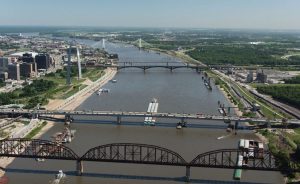 The St. Louis region’s position as the most efficient inland port in the United States was also strengthened in 2021 following the addition of a new grain handling terminal on the banks of the Mississippi River in Cahokia, Illinois, that added additional capacity in the area known as the Ag Coast of America. Photo courtesy of St. Louis Regional Freightway.

The St. Louis Regional Freightway played a pivotal role in 2021 in helping advance the bi-state St. Louis region as a global freight hub. It reinforced the advantages the region’s world-class freight network offers to shippers that are increasingly seeking options in the midst of continuing supply chain disruption across the nation and around the world.

“The past year was extremely challenging for the global supply chain, ranging from the continuing impacts of the COVID-19 pandemic to the ripple effect of the Evergreen container ship stuck in the Suez Canal for nearly a week; yet the St. Louis region’s freight network continued to perform well,” said Mary Lamie. Lamie is the executive vice president of Multi-Modal Enterprises for Bi-State Development, which oversees the St. Louis Regional Freightway as one of its enterprises.

“Considering investments already being made in our most critical infrastructure projects, potential for additional investment through the new infrastructure bill, and the innovation underway that will only add to the optionality this region offers, there is much to be positive about as we turn the page on 2021, and we’re pleased to share some of the highlights,” Lamie said.

After welcoming the successful launch of Container-on-Barge services at America’s Central Port in Granite City, Illinois, key stakeholders behind the efforts to launch innovative Container-on-Vessel (COV) service to the Midwest announced on Dec. 17 that Hawtex Development Corporation is signing on as the lead developer for a new COV port facility in Herculaneum, Mo., 30 miles south of St. Louis. The new port will be a critical link on the new, all-water, north-south trade lane connecting the Midwest and the St. Louis region to the lower Mississippi River and on to worldwide destinations. In another key milestone for this initiative, American Patriot Container Transport LLC, which is developing the patented new vessels that will carry the containerized cargo along the underutilized Mississippi, Illinois and Missouri Rivers, issued a solicitation Dec. 14 to seven American shipyards for construction of four of the patented container on vessels that will provide the new COV service, and an option for four more. Proposals are due at the end of February.

“The new partnerships being forged and the advancements we’re making toward construction of the new vessels represent another huge step forward for this unique supply chain option that will reduce transportation costs for shippers by approximately 30 to 40 percent,” said Sal Litrico, chief executive officer of APCT. “The Mississippi River is ice free and lock free from the St. Louis region all the way south to the Gulf Coast, enabling us to bring our new vessels with the capacity to carry 2,375, 20-foot long by 8-foot-tall shipping containers right into the heart of the Midwest, and this new port facility will be developed specifically to be able to handle those vessels and containers.”

The St. Louis news follows closely on the heels of other critical milestones reached in this initiative that has the potential to be game changer for the shipping industry. In August 2020, American Patriot Holdings LLC and Plaquemines Port Harbor and Terminal District in Louisiana announced they had signed a letter of intent to develop a multimodal, state-of-the-art container terminal at its facility near the southern mouth of the Mississippi River, which would be the gateway port for the new COV service. APM Terminals North America was recently announced as the Container-on-Vessel terminal operator for the gateway port and is working with global shippers to integrate this proposed new logistics system with Midwest manufacturers and producers to ensure both ports are set up for long-term success.

Among the initiatives led by the St. Louis Regional Freightway each year is the compilation of a Priority Projects list representing key infrastructure needs of the manufacturing and logistics industries in heart of the nation in the Eastern Missouri and Southwestern Illinois area. Business and industry leaders work directly with local and state officials and the Illinois DOT and the Missouri DOT to set infrastructure priorities by helping them to understand how infrastructure and efficiency impact on-time delivery and costs. The ongoing regional effort to compile and build consensus for this list remains a key accomplishment of the organization and plays a vital role in helping to ensure various parties are familiar with the priorities before they see them on a grant application.

The St. Louis Regional Freightway’s 2022 Priority Projects List features 21 projects representing a total investment of $2.75 billion, and more than $1.1 billion of the projects on the list are already funded and under construction, expected to start in 2022, or scheduled to begin within the next few years. Among those are the Merchants Bridge, which serves six Class I railroads and Amtrak to cross the Mississippi River at St. Louis and is one of the nation’s primary east-west rail corridors serving the nation’s second largest rail hub by car interchange volume and third largest by gross tonnage. The replacement of this vital rail artery is the bi-state St. Louis region’s top freight infrastructure priority and, after the historic installation of the first of three new trusses in September 2021, completion is expected in early 2023.

Another priority project is the work to enhance key stretches of Interstate 70, one of 17 corridors identified by the United States Department of Agriculture as a High-Volume Domestic Agriculture Highway corridor. Funding has already been secured for a portion of this project referred to as the Wentzville (Missouri) curve, and there is great potential to secure funding for additional improvements needed as a result of the new infrastructure bill. In addition, the Missouri and Illinois Departments of Transportation are already collaborating on another high priority project – $600 million in improvements to the Interstate 270 corridor in the St. Louis region – one of the nation’s primary east-west manufacturing and logistics corridors. Additional work needed could also benefit from funding included in the new infrastructure bill. Another partially funded project that could benefit is IDOT’s relocated Illinois Route 3 project in East St. Louis and Sauget, Illinois, which will decrease congestion, improve safety, address clearance issues, and better accommodate truck and freight movements.

The St. Louis region’s position as the most efficient inland port in the United States was also strengthened in 2021 following the addition of a new grain handling terminal on the banks of the Mississippi River in Cahokia, Illinois, that added additional capacity in the area known as the Ag Coast of America. The region garnered the title due to a 15-mile stretch of the Mississippi River featuring 15 barge-transfer facilities that, at total capacity, can handle 150 barges a day – the highest level of capacity anywhere along the Mississippi River. The addition of the 16th terminal, which was built by American Milling and purchased in December 2020 by Oakley St. Louis, LLC, a subsidiary of Arkansas-based Bruce Oakley, Inc., further expands the capacity with the ability to handle at least 1,000 more truckloads of grain daily.

“Handling approximately 436,000 tons per mile, the St. Louis region’s port system is almost three times more efficient on its river usage than its closest competitor, according to 2020 rankings by the U.S. Army Corps of Engineers,” said Lamie. “The added capacity and enhanced access provided by the newest terminal and nearby infrastructure investments will come in handy as shippers continue to look for the most efficient and reliable ways to move their agriculture products and related commodities.”

Beyond its inland waterway access, the St. Louis region features tremendous multimodal infrastructure that offers needed optionality, available capacity and a relative lack of congestion. Four interstates facilitate one-day drive or less to major Midwestern or southern cities, with three of them reaching the U.S. coasts, and rail service is available to all corners of the country without interchange, including scheduled connections to well-performing East coast ports. It’s a combination that is proving to be a viable option for the movement of any number of other products and positions the St. Louis region to continue to help support the national and global supply chain, performing well during normal and extreme situations, whether caused by a pandemic, severe weather, global fluctuations, or other factors. The new source of dedicated funding through the latest infrastructure bill will only strengthen the region’s freight network to play an even more pivotal role in the global supply chain.

Demand for distribution space has only continued to grow, and the latest data available reveals the bi-state St. Louis market is rebounding well from the uncertainty of 2020 and early 2021, and is positioned to assist distributors and developers to meet the growing demand.

According to the May 2021 Report by the St. Louis Regional Freightway, the St. Louis region has more than 51 million square feet (MSF) of modern bulk inventory supported by a strong labor force and an exceptional freight network that provides tremendous optionality to move goods into and out of the region. Those advantages are contributing to historic lows in vacancy rates, with only 4.5 percent of modern bulk space (more than 250,000 square feet) available in mid-2021. Local year-end news reports reveal the overall St. Louis industrial market in the third quarter broke a decade-old record for the largest total net positive absorption for three consecutive quarters with 7.3 MSF, with vacancy at 4.2%. The low vacancy rate is partially fueled by Amazon continuing to grow its presence in the region, most recently occupying an additional 202,000 square feet of distribution space at the 255 Logistics Center in Sauget Business Park in St. Louis’ Metro East area.

Fortunately, construction in the bi-state region also has rebounded from the uncertainty of 2020, with more than 1.4 MSF delivered in the first half of 2021, and an estimated 2.5 MSF currently under construction, rivaling pre-pandemic levels.

Direct Flights from St. Louis to Europe Set to Resume

While they may be carrying more passengers than freight, a recent announcement that St. Louis Lambert International Airport has landed the first direct flights to Europe in 20 years is a major milestone for future growth as it strengthens the St. Louis region’s ability to serve global companies operating here and to attract new ones. Multiple St. Louis companies and organizations committed funding to improve the region’s global economic competitiveness and to help secure the flights and that commitment underscores the importance of the new air service.

“It also becomes another offering to reinforce that the St. Louis region features “One Location. Global Access,” Lamie said.

The St. Louis Regional Freightway is a Bi-State Development enterprise formed to create a regional freight district and comprehensive authority for freight operations and opportunities within eight counties in southwestern Illinois and eastern Missouri which comprise the St. Louis metropolitan area. Public sector and private industry businesses are partnering with the St. Louis Regional Freightway to establish the bi-state region as one of the premier multimodal freight hubs and distribution centers in the United States through marketing, public advocacy, and freight and infrastructure development. To learn more, visit thefreightway.com.