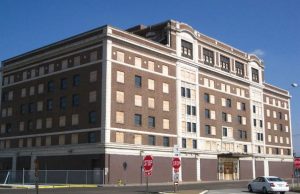 Landmarks Illinois is listing the Broadview Hotel in East St. Louis among its 2021 Most Endangered Historic Places in Illinois.

The annual list focuses on the top threatened architecturally and culturally significant sites throughout the state.

A redevelopment plan to convert the 1926 Broadview building (shown) into 110 affordable senior housing units will fail without the Illinois legislature passing an extension of the River Edge Redevelopment Zone Historic Tax Credit, scheduled to expire at the end of this year. There is active legislation, SB0157, under consideration to extend this historic tax credit for an additional five years.

Properties included on Landmarks Illinois’ annual Most Endangered Historic Places in Illinois are those threatened by a lack of proper maintenance due to neglect or insufficient funding for repair and face the threat of demolition and/or inappropriate redevelopment.

“Communities are passionate about their historic and culturally significant places, yet too often lack the resources necessary to maintain and preserve them,” said Bonnie McDonald, president and CEO of Landmarks Illinois. “Our 2021 Most Endangered Historic Places in Illinois demonstrates the demand for creative solutions, partnerships and incentives to give places of our past a chance for reuse and renewed life. Landmarks Illinois proudly serves as a resource to those trying to overcome these barriers.”

2021 Most Endangered Historic Places in Illinois

The privately-owned Shop Building (called “Up-Top” by local residents), built in 1945 and designed by Keck & Keck, and its Memorial Wall, as well as the Chicago Public Schools-owned School Building C and School Building E, both designed by John C. Christiansen and constructed in 1944 and 1950, respectively, are in need of major rehabilitation and reuse at the Chicago Housing Authority public housing complex on Chicago’s Far South Side.

The state-owned and neglected 1985, Helmut Jahn-designed building in the heart of Chicago’s Loop is the best-known icon of Post-Modern architecture in Illinois, but it is being prepared for sale as a redevelopment site and should be marketed as a reuse opportunity. This is the fourth year since 2017 that Landmarks Illinois has included this site on its Most Endangered Historic Places in Illinois.

The 99-year-old, now-vacant commercial building, which served for decades as an anchor to Cicero’s Cermak Road commercial district and is important for its cultural history to the Chicagoland Czech community, is currently for sale and unprotected.

The 1931 former rail station, most recently in use as a church, is being vacated and offered for sale. Many residents are concerned with the deterioration and loss of community services provided at this neighborhood landmark.

The textbook company’s former headquarters, built in 1966 and an award-winning Midcentury Modern design of architecture firm Perkins & Will, is now for sale, unprotected and being marketed as a residential redevelopment site.

Built in 1889, this community-identified symbol of Havana is threatened by the deterioration of the brick base, metal water tank and surrounding retaining wall while the city struggles to find revenue sources for critical repairs.

The office building constructed in 1891 and located on the closed Joliet Steel site, has sat vacant since the 1980s. Current owner U.S. Steel has been unwilling to stabilize the structure or sell it separately from the rest of the site to enable a potential rehabilitation and reuse.

Landmarks Illinois and partners at Route History in Springfield are working to document and preserve the stories and remaining sites associated with the Green Book. The Green Book was a travel guide published between the late 1930s and 1960s when segregation and Jim Crow laws made it necessary to keep a list of places that provided safe services and accommodations for African American travelers.

Full descriptions of each site included on the 2021 Most Endangered Historic Places in Illinois and a digital press packet, which includes local contacts, are available on its website.

We are People Saving Places for People. Landmarks Illinois, now celebrating its 50th Anniversary, is a membership-based nonprofit organization serving the people of Illinois. We inspire and empower stakeholders to save places that matter to them by providing free guidance, practical and financial resources and access to strategic partnerships. For more information, visit www.Landmarks.org.