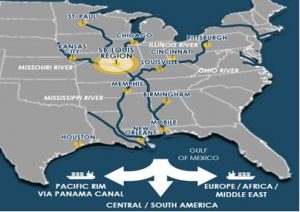 The most efficient inland port in the nation connects the Midwest to the lower Mississippi River and on to worldwide destinations. 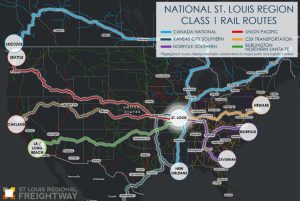 Multiple railroads may be able to provide service to some of these ports and having options like that creates additional opportunities to identify the most cost-effective alternatives and best scheduled service from the St. Louis region.

The agriculture and manufacturing industries may not have much in common, but for those operating in either sector in the bi-state St. Louis region, there is an advantage they both enjoy – global connectivity. In addition to its central location in the United States, which makes two-day shipping to most of the country possible, the region offers easy access to multiple rail lines with service to coastal ports of export, along with an enviable position at the heart of America’s marine highway system.

On the manufacturing front, prospects for success improve when a global company operates in a location that effectively accommodates its logistical needs, and the key role location plays has become even more evident during the COVID-19 pandemic. Securing access to talent is important — and the St. Louis region delivers on that front — but access to customers is critical and requires multimodal connectivity and exceptional freight infrastructure connecting to global markets.

Meeting these requirements is especially important for companies with a global supply chain operating from a primary location, such as Cosmos Corporation of O’Fallon, Mo. Having recently expanded its manufacturing, distribution and corporate headquarters with a brand new $26 million, 200,000-square-foot facility, and with plans for further growth, Cosmos has been serving North America and more than five dozen countries around the world from the one location during the pandemic.

“One of the many reasons for Cosmos’ success has been the locational attributes of the St. Louis region,” said Cosmos President and CEO Landon Hobson, who adds that connectivity, infrastructure and resultant accessibility to world markets makes it an ideal region in which to run a global company. “One might think that being in a location interior to the country far from the oceans would be a disadvantage for a company like ours that serves 68 countries around the world. In fact, we have found quite the opposite.”

Rail connections provide unrivaled reach: Through the Union Pacific, BNSF, CSX and Norfolk Southern Railroads, scheduled trains leave the St. Louis region to access three west coast ports – Long Beach, Los Angeles and Oakland and two east coast ports – Newark/New York City and Norfolk, Va. From these ports of export, customers around the globe in Europe, Asia, the Far East, Africa, Australia, and the Middle East are well served.  Such scheduled service running on certain routes at certain times picking up cars along the way helps to reduce “dwell” time in yards and helps ensure railcars arrive at the expected time. The schedule and the car movement are the priority, not the number of cars pulled.

The region’s intermodal capabilities and services are also supported by the CN Railway, the Kansas City Southern and the Terminal Railroad Association of St. Louis allowing rail car movements to be picked up on schedule, resulting in dependable and higher velocity rail car movement to the Gulf of Mexico, Savanah, Ga., Canada, the Pacific Northwest and Mexico.

Multiple railroads may be able to provide service to some of these ports, and having options like that creates additional opportunities to identify the most cost-effective alternatives and best scheduled service from the St. Louis region.

A global marine highway: While rail also serves the agriculture industry, one might suspect that waterways are a key driver of success in a region known as the Ag Coast of America. The region garnered the title due to a 15-mile stretch of the Mississippi River featuring 15 barge-transfer facilities that, at total capacity, could handle 150 barges a day – the highest level of capacity anywhere along the Mississippi River. The Ag Coast recently added a new terminal in Cahokia, Illinois, that expands the existing capacity with the ability to handle at least a thousand truckloads of grain daily.

Currently, 50 percent of U.S. crops and livestock are produced within a 500-mile radius of the St. Louis region, including approximately 80 percent of corn and soybean acreage. The St. Louis region’s strategic location on the river, associated infrastructure assets and multimodal connectivity enable it to play a crucial role in moving those commodities.

The added capacity will come in handy, according to David Jump, President and CEO of Cahokia-based American Milling, which built the newest facility and sold it to north Arkansas-based Bruce Oakley, Inc. in December.

“It will be a record year for corn exports from the United States, and it will also be a record for soybean exports from the U.S.  In terms of the river and bringing grain to the river, it just doesn’t get any better than that, and the St. Louis portion of those exports continues, on a percentage basis, to be very strong,” Jump said.

Looking at the integration of rail with the inland port system in the St. Louis region, Jump noted the unit size of the rail cars really began to grow about eight years ago. Over time, they grew from just 15 cars to 75 car units and then up to 110 cars and occasionally as much as 125 cars connected in what were termed shuttle trains or train sets. He said it was when they hit 75 cars that the railroads really started moving more grain to St. Louis. The railcars currently stay hooked up to the same locomotives and go back and forth, loading and unloading at facilities that could efficiently handle the volume, enabling the railroads to provide a very attractive, more aggressive rate schedule for the movement of that grain in return for rapid cycle times.

“That really made a difference, and there are now several facilities in the St. Louis market that can unload these train sets quickly. Cahokia is one of them and others along the Ag Coast are too,” said Jump. “When you combine the economics and the efficiencies of river transportation from St. Louis to New Orleans and add in the capacity to efficiently handle these large trains in the St. Louis region, that’s where the magic happens.”

EDITOR’S NOTE: This story is one of several in a section in the May issue of the Illinois Business Journal, dedicated to the upcoming FreightWeek STL sponsored by the St. Louis Regional Freightway, which involves logistical interests on both sides of the Mississippi River. To see the entire section go to Current Archives at ibjonline.com