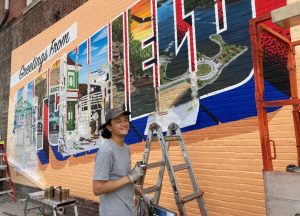 With the new Litchfield Greetings Tour Mural almost complete, the Litchfield Tourism Office is inviting  the public to see the mural during the Litchfield Chamber of Commerce’s Art in the Park this Saturday, May 1.

The Litchfield Greetings Tour Mural is located at the corner of Illinois Route 16/Union Avenue and State Street (423 N. State St). The public is welcome to come take photographs, and greet the artist Victor Ving (shown) and photographer Lisa Beggs.

The Greetings Tour Project is a National Project, with the goal of creating their iconic postcard murals in all 50 states. This mural is the second piece in the state of Illinois (after Chicago) and the sixth one on the entire Route 66 Mother Road.

The imagery includes: the Historic Litchfield Carnegie Library Building founded in 1904 by the philanthropist Andrew Carnegie and designed by architect Paul Moratz, the internationally known Ariston Café founded in 1924 by Pete Adam and is claimed to be the oldest continuously operating restaurant on Roue 66, the Wabash Train Depot built in 1914 and is a tribute to the railroad history that was instrumental in the development of the City of Litchfield, Shoal Creek Conservation Area which is home to 700 plant and 70 butterfly species and one of the best examples of Southern Illinois till-plain Oak & Hickory woodlands in Illinois, and the Lake Lou Yaeger Recreational Area which is a haven for boating, fishing, swimming, camping, hiking, and mountain biking.

Mural artist Ving and photographer Beggs, are a couple on a cross-country road trip in their RV creating interactive murals that will become future landmarks. The ‘Greetings Tour’ seeks to create public art that will capture the pride of local residents for their hometowns and spark the interest of visitors and tourists. The two artists have been traveling select cities throughout the United States since April 2015 painting modern murals with spray paint inspired by vintage large-letter postcards. At each stop, Begg’s photography and recommendations from locals will serve as reference for letters in the mural given back to the cities. Local artists and businesses will be invited to collaborate with their ideas.