He is third candidate to seek 2022 Republican nomination

SPRINGFIELD – Businessman Gary Rabine on Tuesday announced he will seek the Republican nomination for governor in 2022, becoming the third candidate to officially enter the field.

The suburban entrepreneur held a pair of kickoff events in Schaumburg and Woodstock on Tuesday, lobbing criticisms at incumbent Gov. JB Pritzker over the state’s property taxes and pandemic-related business closures.

The 57-year-old businessman is the owner and founder of Rabine Group, a national exterior services company specializing in commercial paving projects.

Rabine is also an advisory board member and donor for Turning Point USA, a conservative non-profit aimed at promoting conservative principles on college campuses across the country, as well as an active member of the Young Presidents’ Organization and the Republican Governors Association.

The announcement touted his entrepreneurial experience, saying that he would bring a business-centric approach to create jobs and “let the private sector thrive”.

“We will lift up businesses and help develop the safest practices,” Rabine said. “We will treat our small businesses and the millions of jobs they create as the valued customers they all are to us.”

Rabine said that he would assemble a team of “the best economic minds” to establish an Illinois recovery plan with the goal of creating “50,000 jobs or more” per year by 2024. A reversal of what he says is an exodus of businesses and residents. 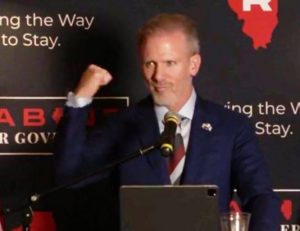 Although property taxes are set by local units of government, Rabine said he would aim to cut property taxes by at least 50 percent by 2024 as part of his campaign platform.

“We don’t need to be the lowest taxes in the country, we just need to be competitive,” Rabine said.

Rabine said that Pritzker, who he called a “California trust fund billionaire,” bought the governorship and closed thousands of businesses with his COVID-19 executive orders.

When asked by the Chicago Tribune Tuesday whether he accepted the results of the 2020 presidential election, Rabine told the paper, “I’m not smart enough to understand what was the end result, whether it was stolen or not, and I would never say that.”

His comment drew backlash from the national Democratic Governors Association and the Illinois Democratic County Chairs’ Association Tuesday, with both organizations releasing statements condemning the remarks.

DGA Deputy Executive Director Wendi Wallace called the remarks “dangerous” and said the comment “should disqualify him from running for governor.”

“Rabine’s entrance into the race ensures the GOP primary will be an all-out brawl to fight for the most conservative voters,” Wallace said in the statement. “Illinois voters are not looking for a return to the Trump administration, and they’ll reject Rabine and anyone who shares his values at the ballot box.”

“Gary Rabine is either clueless or part of the conspiracy theory crew who don’t believe Joe Biden was legally elected President,” Zahorik said in a statement. “Either one is disqualifying to serve as an elected officeholder.”

Rabine joins former state Sen. Paul Schimpf, of Waterloo, and surrent state Sen. Darren Bailey, of Xenia, as the currently declared candidates in the Republican primary. The primary election is scheduled to take place on March 15, 2022.

PHOTO:  Businessman Gary Rabine announces his candidacy for governor at Bull Valley Golf Club in Woodstock Tuesday. Rabine is the third candidate to announce they will seek the Republican nomination for Governor in 2022. (Credit: facebook.com/garyrabineillinois)