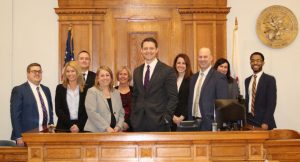 With Madison County courts opening up again as of March 1, State’s Attorney Tom Haine has introduced the new leadership team at his office, which includes some new faces and some familiar ones.

“The period of transition since I took office two months ago has been fast-paced but fruitful,” said Haine. “My team took advantage of the COVID-required pause to introduce many important internal improvements, to include a full-case tracking system, office and policy modernization, and a modified leadership structure. In short, we are motivated and prepared for a very busy year in Madison County’s justice system. Madison County can be proud of this team of professionals, dedicated to pursuing vigorous and fair justice. I am grateful for their hard work.”

Chad Loughery is now first sssistant. He was elevated to this position by Haine, after having worked in the office for the past 14 years. He has general duties over all attorneys in the office under Haine.

Lauren Maricle is now chief of the Violent Crimes Unit. She was elevated to this position by Haine after having worked in the office for the past eight years.

She directs the Violent Crimes Unit, organizing its trial work, and is also prosecuting many of the office’s most important upcoming trials.

Andrew Carruthers is the chief of the Civil Division. He was brought on by Haine after a distinguished career in private practice. He manages the office’s representation of county officials and offices as well as outside litigation and advice to the County Board.

Kathleen Nolan is chief of the Juvenile Justice and Child Justice Division. She has worked in the office for the past eight years. She leads a team dedicated to bringing justice to child victims and survivors of sexual abuse, and to prosecute juvenile offenders.

Katie Warren is now chief of the Criminal Division. She was elevated to this position by Haine after having worked in the office for 11 years. Warren directs the assignment and management of the large number of felony cases prosecuted by Madison County – more than 700 since Dec. 1.

Trent Cameron is chief of the Child Support Division. He has worked in the office for five years. He has continued working to ensure child support and paternity issues are promptly and energetically prosecuted by the state, Haine said.

Sean Williams is chief of the Traffic and Misdemeanor Division. He has worked in the office forseven years and has been instrumental in innovations such as the ZOOM traffic dockets. He prosecutes felony cases as well.

Finally, Haine has created two new positions in the office: trial advocacy coordinator and office manager. Susan Jensen is the trial advocacy coordinator. She is a longtime prosecutor who worked for Haine’s father, Bill, when Bill was state’s attorney. The new state’s attorney brought Jensen brought back to the office to help build up the trial skills in the office through  mentorship and training of younger attorneys.

Maria Maxwell is the new office manager and was a congressional aide for many years, also working in compliance work in private industry. She has focused on rebuilding and professionalizing the internal operations of the office.

“I’m happy to introduce this team, dedicated to bringing stronger, faster, and fairer justice to Madison County,” Haine said. “It will be a busy year, and we are ready to go.”