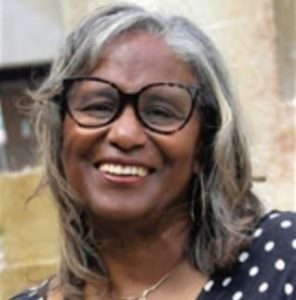 Doris Turner will finish out the term of former Sen. Andy Manar, D-Bunker Hill, who resigned last month as senator of the 48th Senate District in central Illinois to take a job as a senior advisor for Gov. JB Pritzker. 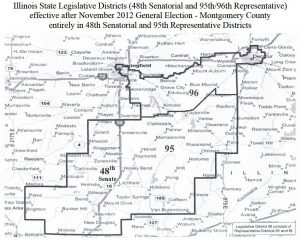 A map of the 48th Senate District in Illinois, courtesy Montgomery County.

Turner, out of eight total candidates, was the unanimous choice of the six county chairs on Saturday, according to a press release. Kovats was the Sangamon County chair proxy for Turner.

In the release, Doris Turner described the senate appointment as an honor of a lifetime.

“We are facing a difficult road ahead as our state rebuilds from the devastation of COVID-19. The gravity of this will weigh on me every day as I work to get our kids back in school and our businesses reopen. From Bunker Hill to Decatur and everywhere in between, it’s time to roll up our sleeves and get to work,” she said.

Simmons fills the vacancy left by former Sen. Heather Steans, who resigned at the end of January from her seat representing the 7th Senate District on Chicago’s north side.

He was chosen by the Democratic committeemen and committeewomen from the Chicago wards that comprise the 7th Senate District.

He is the first openly gay person to serve in the Illinois Senate, the first person of color to represent Chicago’s north side lake front district and first Ethiopian-American to serve in the General Assembly, Simmons wrote in a statement on social media.

Simmons beat out Rep. Kelly Cassidy, D-Chicago, who was the first to state her intention to seek the seat. Cassidy, who is committeewoman for the 49th ward, had a proxy represent her during the selection process.

In his written statement, Simmons thanked Steans for “her extraordinary record of progressive accomplishments,” and he also thanked Cassidy for “her steadfast leadership and commitment to equity for the people of Illinois.”

“I thank my family, the community and the local Democratic leadership for placing their confidence in me,” Simmons wrote in the statement. “I am excited to partner with Rep. Kelly Cassidy, Leader Greg Harris, the Illinois Legislative Black Caucus and our elected officials within and surrounding District 7 to bring outstanding public service to our neighborhoods and fight for everyday people from all backgrounds,” he wrote.

In her own statement issued Saturday after the vote, Cassidy congratulated Simmons and pledged “to continue to be a relentless voice for our values in the Illinois House of Representatives.”

Simmons is the founder and CEO of Blue Sky Strategies, a firm specializing in “equitable urban planning, youth empowerment, government accountability, and anti-racist public policy,” according to the website.

He also serves as the deputy director of the My Brother’s Keeper Alliance, an initiative of the Obama Foundation that seeks to build “safe and supportive communities for boys and young men of color where they feel valued and have clear pathways to opportunity,” the website states.

Before that, he worked as a deputy commissioner in the city of Chicago’s Department of Planning and Development, and as policy director under Rahm Emanuel’s administration.

The two Democratic appointments to the Senate follow the recent selections of Adriane Johnson, Cristina Pacione-Zayas and Sally Turner to vacancies in the 30th, 20th and 44th Senate Districts, respectively. They’ve replaced retiring senators through appointments from party officials.

On the other side of the aisle and unrelated to Doris Turner, Republicans chose Sally Turner, a former Logan County clerk, to fill the vacancy created by former Sen. Bill Brady’s resignation in December.

She was chosen last month by Republican County chairs of Logan, McLean, Menard, Sangamon and Tazewell counties. Parts or all of those five counties comprise the 44th Senate District.

Turner served six terms as Logan County clerk, beginning with her first election to the post in 1994. Before that, she was a juvenile probation officer and then spent six years as a paralegal in the Office of the Logan County State’s Attorney.

“My focus is to bring financial stability and economic growth to Illinois by fighting for lower taxes, balanced budgets and smarter government,” Turner said in a press release. “While holding tight to my conservative values, I will work across the aisle to find common ground beneficial to the people I represent and the State of Illinois.”

Another recently-named senator has been seated since December. Cristina Pacione-Zayas was selected by Cook County Democratic Party committee members the fill the vacancy in the 20th Senate District left by former Sen. Iris Martinez, who was elected to serve as clerk of the Cook County Circuit Court in November.

The 20th Senate District covers neighborhoods on the northwest side of Chicago.

After her appointment to the seat, Pacione-Zayas stepped down from her role as associate vice president for the policy and leadership department at the Erikson Institute, an early childhood development organization in Chicago.

“You can count on me to help fellow legislators ‘find the baby’ in the work, and to advance an anti-racist framework that dismantles systemic racism and economic exploitation so we can all thrive,” she said in a statement.

Johnson, who most recently served on the Buffalo Grove Park District Board, has been serving in the General Assembly since October, when she was appointed by Lake County Democratic Party officials to fill the seat left vacant by the resignation of Terry Link, who had represented the 30th Senate district since 1997.

Link resigned in September, shortly before he pleaded guilty in federal court to a felony tax evasion charge for underreporting his income by more than $73,000 on his federal and state tax returns from 2012 through 2016.

Johnson is the first Black representative of the 30th Senate District, which covers a large swath of the northern suburbs in Lake County.

“I’m truly honored and humbled by this entire experience,” Johnson said in a news release. “We have a lot of important issues to tackle this year, and I’m ready to serve the residents of the 30th District.”

Should the minimum wage be increased? Take our poll. (See below)

Here’s what Illinois gets in COVID-19 relief bill, the American Rescue Plan