SPRINGFIELD — In early July, a judge in downstate Clay County voided Gov. JB Pritzker’s executive orders in a sweeping order that he applied to the entire state, at the request of a southern Illinois lawmaker who sued Pritzker over his response to the pandemic.

Pritzker’s lawyers asked Grischow last month to “reconsider” the July 2 order from McHaney, who initially presided over Bailey’s case before it was transferred to Sangamon County.

On Monday, Grischow issued an 11-page opinion vacating McHaney’s order, including “the order wherein Judge McHaney applied it to ‘all citizens of the state of Illinois.’”

McHaney’s order found Pritzker’s emergency powers ended on April 8 — the date his first disaster proclamation lapsed — and it declared the Illinois Department of Public Health as the “proper authority to restrict a citizen’s movement and/or forcibly close their business premises….”

Regarding the claim that Pritzker’s emergency powers ended on April 8, Grischow found that the state law in question — the Illinois Emergency Management Agency Act — allows the governor to issue more than one 30-day disaster proclamation.

She wrote that her interpretation of the Illinois Emergency Management Agency Act is consistent with a 2nd District Appellate Court decision from November, in FoxFire Tavern LLC v. Pritzker, et al. In that case, a Kane County restaurant sued the governor for exceeding his authority under the law by imposing a ban on indoor dining and the appellate court ruled in favor of Pritzker.

Grischow also rejected McHaney’s assertions that the Department of Public Health, not the governor, is responsible for closing businesses or restricting individuals’ activities during a public health emergency, citing the Illinois Constitution as providing the governor with “supreme executive authority.”

“This grant of authority includes providing for the health, safety and welfare of the people of Illinois under a rational basis standard,” Grischow wrote in her Dec. 21 opinion.

Grischow is overseeing a total of 19 cases that were consolidated by the Illinois Supreme Court to her court. The cases all raise the same question about the governor’s authority to issue multiple, successive disaster proclamations under IEMAA.

Those cases are ongoing and no final decision has been issued.

Thomas DeVore, an attorney who represents Bailey and a couple other clients before Grischow, said he wasn’t surprised by Monday’s ruling because she was required to follow the precedent established in the 2nd District Appellate Court opinion. 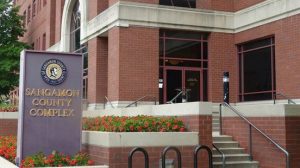 He said he intends to continue to pursue Bailey’s case in court, adding that the next procedural step is to appeal to the 4th District Appellate Court, which has jurisdiction over appeals from Sangamon County court.

Grischow’s order “still leaves all of those issues in front of the court,” DeVore said in a phone interview. “But at the end of the day, the Illinois Supreme Court will decide these issues, so practically speaking her ruling changed nothing.”

The Illinois Supreme Court has twice declined to intervene in this case, both times at the request of Pritzker’s lawyers, first in May and then in August.

Last week, lawyers for FoxFire filed a petition asking the Illinois Supreme Court to hear the case and overturn the 2nd District Appellate Court’s ruling. The Supreme Court justices have not yet accepted or declined to hear the FoxFire case.

In an emailed statement, a spokesperson for Attorney General Kwame Raoul’s office — which represents the governor and his agencies in court — wrote that Grischow’s ruling “might finally signal the end of the first lawsuit – filed earlier this year by Darren Bailey – challenging the governor’s authority to issue executive orders to protect Illinois residents during the COVID-19 pandemic.”

“For several months, Darren Bailey’s lawsuit has served as a distraction from the urgent need to mitigate the spread of COVID-19 in Illinois.  Previously when given the opportunity, Mr. Bailey has abandoned any effort to seek appellate court review of his challenge to the governor’s actions, and we assume that will again be the case,” wrote AG spokesperson Annie Thompson.