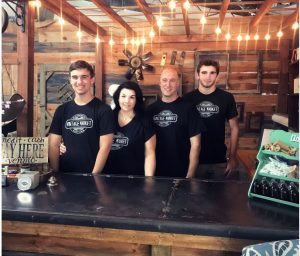 The Blanquart family, from left, Carter, Christine, Brad and Chase.

Business after business has felt the glare of 2020, but some are finding ways to work within the challenges.

For the Blanquart family, COVID-19 meant having more time to polish a Rusty Gem.

“I know we could look at this a whole different way, but with the outcome, we feel really blessed,” Christine Blanquart says of her new business, Blanquart’s Rusty Gem Vintage Market, 501 Lebanon Ave., Belleville.

Blanquart and her family have taken a 1960s automobile repair shop and turned it into a market housing a collection of vintage merchandise and antiques that have been collected from around the country.

“We closed on the building in February with the anticipation of opening in April, not knowing the events that would happen this year. Instead we opened in June. But it all worked out for the best because it gave us time to work on the building for a few months,” she said.

The Rusty Gem is described as a pop-up store that opens on the third weekend of each month to offer collectibles and repurposed merchandise. Blanquart and her husband Brad have long traveled in the search for antiques and have sold their goods at other people’s stores on both sides of the Mississippi. It was Brad who encouraged her to pursue the dream of opening her own shop.

Brad Blanquart is a radiation oncology therapist at Siteman Cancer Center in St. Louis. Christine is a school nurse at Red Bud High School, a new position that she took this year.

“I left my previous job during the COVID pandemic so I could focus time on opening my business, and Red Bud High School called me to offer me a job,” she said.

Everyone in the family has played a role in the new store.

Chase, the oldest of their two sons, is an 18-year-old freshman at Illinois College. He set up all the Wi-Fi and internet at the business and serves as a cashier when needed. The youngest, Carter, works at the shop and goes to Belleville West High School. He opens the market early and loads the heavy goods that are purchased.

Both parents went to Southwestern Illinois College. Christine then went to Lindenwood University and her husband to Washington University and Saint Louis University. Both are Belleville natives. Today, they live in Millstadt.

The market is just down the street from White Cottage ice cream shop, but the neighborhood is mostly residential, and many neighbors have been showing up to share memories of the location gone past.

“Everybody has been so welcoming. People stop in all the time and tell us stories about what the building was used for through the years,” Blanquart said. The location has had a variety of uses but the two large bay doors give away its origins for repairing autos.

The store is only open the third weekend of each month from 10 a.m. to 4 p.m. on Saturday and Sunday. The original plan called for the Rusty Gem to be open the same weekend as the Belleville Flea Market, which opens the third weekend and draws hordes from the Midwest and beyond. That market, however, has been shuttered by the virus.

Eventually there will be a “new normal” that will provide collectors double reasons to come to Belleville, she said.

The 2,000-square-foot vintage store, which has housed several businesses through time, offers many repurposed goods — old merchandise that’s been converted for new uses, from furniture to bottles to mirrors to kitchenware to home decor. The huge garage doors are thrown open for access.

“We’ve broken up the square footage into different vignettes, so you’ll come in and you’ll see the garden theme, or the Christmas room, the kitchen. People will come in, take videos and share them on social media and that’s always flattering,” she said. 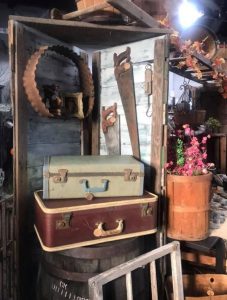 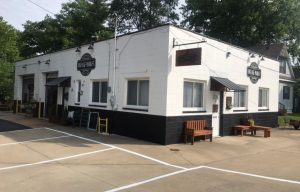 The market has its own Facebook and Instagram pages. Blanquart posts pictures the night before a weekend opening, and that always triggers interest — from near and far.

“I’ve had people from Iowa call and buy complete sets of furniture. We have customers from Georgia, from California. It’s just been unreal.” Much of the furniture has been customized by the Blanquarts.

Small businesses will come in and buy goods for their own business.

People who like vintage items will travel long distances to get them — much as the Blanquarts have done through the years.

“We love taking little trips, all over, to pick up things,” she said, noting her full-size Chevrolet Silverado used for hauling. Until the couple opened the market, there was never enough space to store everything.

“My husband’s very good at packing and organizing. We got the garage cleaned out, we got the basement cleaned out. That’s been good.

Much of what she finds has been at estate sales, and she follows particular auctioneers.

For years she has collected vintage Christmas goods, and people will let her know when there is a good find.

The store is holding occasional special arts events to broaden the interest. Its first, in September, was a chalk-painting event. (She carries a full line of chalk paints.) The latest, planned this month, was dedicated to Halloween and called a Ghouls Night Out.

The Blanquart name is familiar in Belleville. Brad’s father is Chuck Blanquart, who owns and operates Blanquart Jewelers on East Main Street in Belleville, a store originally opened by George Blanquart, Chuck’s father, in 1936. Brad’s son Carter helps at the jewelry store on weekends when he’s not working at the new vintage market.

The jewelry store is about a mile from the new vintage market, and the name Rusty Gem is a bit of a salute by Brad Blanquart to the jewelry business, she said.

The couple looked at buildings in the Main Street area before deciding upon their location. The actual building did not require much advance work since the previous owner had kept it up. In fact, it needs some touches to make it more rustic. Stacks of old wood found above the building’s office area were applied to the wall.

“We ended up building our cash stand out of the 8-foot steel work tables that were left there,” Blanquart said.

On the exterior, they replaced awnings, put up signs and added new light fixtures. Greg Blanquart, Brad’s brother, designed the logo for the market.

Christine Blanquart said she got a lot of encouragement from people, including a longtime friend, Deb Lebryk, the owner of Roseberry Farms in Columbia, Ill., another vintage collectible outlet.

“She wrote an article about the shop and posted it on her Facebook business page. Several people have posted on social media, but that was one of the things that made me cry. She has such an amazing store and over the years I’ve taken such inspiration from her and other small businesses.”

She added: “I have truly met some amazing people with doing this business. One of my favorite things is when someone sees something in our store and it triggers a nostalgic memory and they share it. Vintage items take us all back to simpler times.”

This story is in the October print edition of the Illinois Business Journal. For more stories from the issue, go to the Current Edition link at ibjonline.com