SPRINGFIELD — Gov. JB Pritzker highlighted the importance of child care and early childhood education on Tuesday as he traveled to Decatur to celebrate the reopening of the local Boys and Girls Club there, which was closed for several weeks due to the COVID-19 pandemic.

However, he’s still not sure about the reopening of schools this fall.

The governor was joined by two of the area’s lawmakers — Sen. Andy Manar, D-Bunker Hill, and Rep. Sue Scherer, D-Decatur — at a news conference in the facility’s gym. Pritzker said much of the reason why community centers such as the one in Decatur are able to reopen is because of the funding they’ve received in recent state budgets. 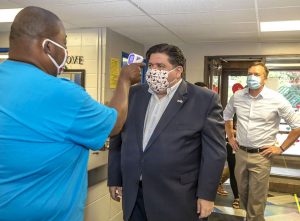 “I think average folks think that budget is a pretty boring thing to talk about, but a budget is a moral document,” he said. “It’s an expression of who we are as a people here in the state. It’s an expression of what we believe in; the investments that we make are a reflection of who we are. … It sounds like a boring topic, but when you go without one for a couple years as we did a few years ago, you find out just how important it is to pass it.”

Shamika Bond, executive director of the center, said the facility just reopened Monday, June 8, after being closed for most on-site activities since the stay-at-home order went into effect in March.

“During these devastating times, we stayed true to our mission by continuing to serve the youth in our community by providing after-hour meals, mentorship, and we continued with recognition,” she said. “We were afraid of the unknown. We were afraid of each other. But most importantly, we were afraid for those children that needed us most. Our children more than ever need leadership, guidance and support.”

Boys and Girls Clubs provide a variety of programs for children and youth such as recreation, summer camps and after-school activities, and they can be an invaluable resource for parents who work and can’t afford other kinds of daycare for their children.

The reopening of child care facilities will benefit those parents during the summer, but Illinois is still only in Phase 3 of Pritzker’s reopening plan, which limits public gatherings to 10 or fewer people and still does not allow the full reopening of schools.

That will only be allowed in Phase 4, which could begin as early as June 26 on a region-by-region basis, depending on the rates of infection and hospitalization in those areas at that time.

Pritzker said Tuesday that it is still not certain that schools will be able to reopen as normal this fall.

“It’s true that very shortly, we’re going to have to work on, you know, what is the consensus view about going back to school for the state of Illinois,” he said. “I know there have been different decisions in different states. It’s leaning toward people going back to school, but my decisions are going to, again, be made … based upon the data and the science and the recommendations that come. We’ll try to get there as soon as we can so schools can prepare.”

Pritzker also responded to criticism he has received, particularly from Republicans, for taking part in large demonstrations in Chicago where thousands of people at a time have gathered to protest racism and police brutality in the wake of the death last week of George Floyd, an unarmed black man who died at the hands of a white police officer.

Illinois Republican Party spokesman Joe Hackler issued a statement Tuesday saying Pritzker was clearly violating his own orders and calling his action, “a slap in the face to every Illinoisan who has been diligently following them.”

Pritzker, however, was unapologetic.

“Sometimes I go places, and it’s very difficult to get socially distanced when an awful lot of people show up,” he said. “And I’m not going to run away. And especially at this moment, it’s important to express ourselves. It’s important to stand up for people’s first amendment rights. And I’m talking about the peaceful protesters across the state. It’s important to have the governor stand with them on issues that are important to the state and progress that we need to make.”

Meanwhile, the Illinois Department of Public Health reported Tuesday there had been 797 new confirmed cases of COVID-19 over the preceding 24 hours and 95 additional virus-related deaths. That was the fourth consecutive day when the daily count of new cases was below 1,000, and the fifth consecutive day in which the daily death count was below 100.

Those deaths, however, did push the statewide total since the pandemic began to 6,018. The total number of confirmed cases now stands at 129,212.