SPRINGFIELD – The Illinois comptroller’s office borrowed $105 million from various funds in March, in large part so it could make bigger-than-normal payments to hospitals as they brace for the peak of the COVID-19 outbreak later this month. 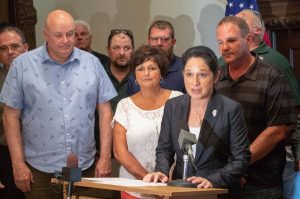 But Illinois Comptroller Susana Mendoza is advising all state vendors that there will likely be payment delays in April, in part because the tax filing deadline for both state and federal taxes has been pushed back to July 15.

The inter-fund borrowing was noted last week in the state’s monthly revenue report from the Commission on Government Forecasting and Accountability. The comptroller’s office has authority to engage in such borrowing to meet short-term cash flow needs of the general revenue fund.

That report noted that total tax receipts in March, at $3.4 billion, was about what was expected, and 3.3 percent above the same month last year. But it also noted that the impact of the economic slowdown brought on by Gov. JB Pritzker’s stay-at-home order and closure of nonessential businesses had not yet shown up in the revenue numbers.

The state has a backlog of past-due bills totaling $7.8 billion, down significantly from the peak of $16.7 billion reported in November 2017. But Mendoza advised all state vendors last week to expect further payment delays in April because of the expected delay in tax filings.

The state would normally bring in about $1 billion in revenue during April, Mendoza’s office said.

“In addition to the deferred revenues from the filing extension, it has not yet been determined what additional negative fiscal impact reduced economic activity related to this pandemic will have on our state revenues going forward,” Mendoza’s office said in a statement.

According to the Institute for Health Metrics and Evaluation at the University of Washington, the COVID-19 outbreak is expected to peak in Illinois around April 15. The institute projects the state will have enough hospital beds to handle the surge, but it will like face a shortage of 722 intensive care unit beds at the peak.

PHOTO: Comptroller Susana Mendoza stands among labor leaders in her office Aug. 13, 2019, in Springfield as she signs an executive order regarding enforcement of prevailing wage laws in light of a $45 billion capital infrastructure plan which became law earlier this year. Her office borrowed $105 million from various funds in March, in large part so it could make bigger-than-normal payments to hospitals as they brace for the peak of the COVID-19 outbreak later this month. (Capitol News Illinois file photo by Jerry Nowicki)