SPRINGFIELD – Illinois’ top health official Tuesday elaborated on the Department of Public Health’s efforts to contain the coronavirus, one day after a fourth person in the state tested positive for the illness. 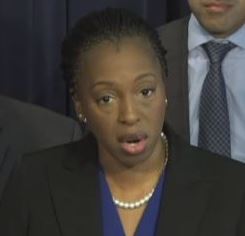 Dr. Ngozi Ezike, director of the department, updated members of the Senate Public Health Committee on state and local efforts to prevent, contain and treat COVID-19, as well as the toll it has taken on state resources.

“The risk of coronavirus infection to the people of Illinois remains low, however, even as the risk is low, we are planning and preparing for all possibilities,” Ezike (shown) said.

She said the state has tested 116 people for the virus. Ninety tests have come back negative, four were confirmed as infected and 22 are still outstanding.

The four positive cases were all in Cook County. The most recent two, announced Saturday and Monday, were a couple in their 70s. Their tests await official confirmation from the Centers for Disease Control and Prevention.

Ezike said state health officials and the CDC are trying to find out where those people got the virus. The first two cases, another elderly couple, have since recovered. The wife was infected after traveling to Wuhan, China, where the virus originated, while her husband contracted the virus from her.

The total cost to local health departments and the state for COVID-19 response has been more than $20 million, Ezike told reporters after testifying.

“We have also requested additional funding for our preparedness efforts,” she told lawmakers.

She said IDPH wants more money from the federal government to cover costs that the state government and local governments have incurred, including the cost of providing testing. She said cost estimates have been provided to Illinois’ congressmembers so they can advocate for more funding in the federal budget currently being negotiated.

“We absolutely want support to get additional resources,” Ezike also said of the Illinois legislature.

That would include funding for personnel, equipment, lab and housing costs.

Ezike said health officials monitor anyone suspected to have come in contact with a person known to have the virus for 14 days. If they develop a fever, they are tested, and results are sent to a lab in Chicago, Springfield or Carbondale.

Ezike said the state has 2,200 testing kits, and she will ask the CDC for more when she travels to Washington, D.C. on Wednesday.

The IDPH is preparing to partner with hospitals in every region for a program called “sentinel surveillance,” where patients with flu-like symptoms can be voluntarily tested for the virus. The aim is to detect community spread, which is when the source of the infection is unknown.

“It is likely that we will have some level of community spread,” Ezike said. “The issue is how much.”

Ezike said the health department is in regular contact with hospitals, talking through infection control protocols and keeping up with inventories of medical supplies. Chicago’s O’Hare International Airport is also screening some passengers for the virus.

The best way for people to protect against COVID-19 right now, Ezike told lawmakers, is basic hygienic practices such as washing hands for 20 seconds with soap and water, using hand sanitizer, staying home when sick and cleaning frequently-touched surfaces.

“These commonsense, everyday measures really do matter,” she said.

Preparing for the future

Ezike also addressed concerns that some senators had about how severe the virus could get. State Sen. Julie Morrison, D-Deerfield, asked if schools, universities and businesses should think about closing.

“We’re not in that situation now,” Ezike said.

She added that such a response would also not be a “one-size-fits-all for the state.” She said school or work closures may be appropriate if one part of the state sees dozens or hundreds of cases.

State Sen. Mattie Hunter, D-Chicago, asked if people should stock up on emergency supplies like medications, food and water, in case they need to be quarantined.

“That’s a basic that we always recommend, coronavirus or not,” Ezike said.

Currently, the only way to test for the virus is for people to get tested at a hospital or clinic, which sends samples to a state lab.

Committee Chair Patricia Van Pelt, D-Chicago, said this “convoluted” process may shut out people who cannot afford to go to the doctor.

“We are looking at the possibility of having some kind of drive-through testing where you don’t bring people into the hospital who are sick in the first place,” Ezike said.

She told reporters that she hopes commercially available tests will become available so hospitals and clinics can cut out the state lab and get results in an hour or two.

Ezike also said IDPH is conducting hospital assessments in case things worsen. Additionally, she encouraged people to get this year’s flu shot so that illness can be one less thing that health care workers have to juggle if COVID-19 spreads.

A vaccine for COVID-19 is in the works on the national and international levels, but Ezike told lawmakers it could be six to 12 months before it is available.

“Should this coronavirus infection become something like H1N1, which is a seasonal thing, then we would have one for potentially the next round,” she said.

The number of confirmed cases of COVID-19 in the U.S. rose above 100 on Tuesday, with Washington state seeing the most cases at 31. Washington is also the only state to have deaths, with nine. Most of the dead were either elderly or had preexisting medical conditions.

More than 92,000 cases have been confirmed worldwide as of Tuesday evening, causing more than 3,100 deaths.

Illinoisans worried they may have the virus can call the state’s COVID-19 hotline (1-800-889-3931) or email dph.sick@illinois.gov. IDPH also has a webpage of frequently asked questions: http://www.dph.illinois.gov/topics-services/diseases-and-conditions/diseases-a-z-list/coronavirus.