U.S. Reps. Rodney Davis (R-Ill.), Mike Bost (R-Ill.), and John Shimkus (R-Ill.) on Friday  announced a $21.4 million grant awarded to the Terminal Railroad Association of St. Louis . The grant, awarded through the FY Consolidated Rail Infrastructure and Safety Improvements Grant Program, will be used to make critical repairs to the Merchants Bridge that runs between Metro East and St. Louis, crossing the Mississippi at Venice. 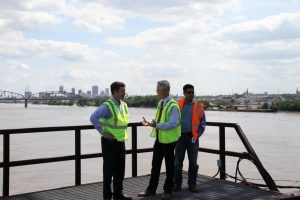 “St. Louis plays a key role in our nation’s rail network, and Merchants Bridge is one of the most important arteries that keeps our freight and passenger rail grid moving,” Davis said. “Merchants Bridge is invaluable to our region, as it supports six Class I railroads, two international cargo airports, and the nation’s third-largest inland port. I’m pleased to see these funds go toward strengthening this crucial piece of our nation’s infrastructure so it can continue supporting our region and economy for many more years.”

“Merchants Bridge was built in 1890 and remains a vital national link for commerce and passenger service,” said Bost. “The Merchants Bridge Rehabilitation and Reconstruction project will not only provide need construction jobs, but ensure our local businesses in our region remain competitive with their peers.”

“Merchants Bridge is one of the most heavily used Mississippi River rail crossings in the country,” said Shimkus. “These federal funds will help ensure this critical and historic piece of infrastructure is ready to meet the growing demand for passenger and freight transportation.”

The Terminal Railroad Association of St. Louis will use the $21,445,577 grant to replace the main span trusses of the Merchants Bridge between St. Louis, Missouri and Venice. These improvements will double the capacity of the bridge from 38 trains per day to 76 trains per day.

FILE PHOTO: Davis, left, during a tour of the Merchants Bridge in 2016.