SPRINGFIELD – One month ahead of the tipoff of March Madness, Illinois lawmakers – backed by a pair of NBA brothers – are renewing a push to allow college athletes to profit from the use of their name and likeness.

Rep. Emanuel “Chris” Welch called a Chicago news conference Friday to push for his Student Athlete Endorsement Act, or House Bill 3904, which is awaiting a vote in the Illinois Senate.

“In a little over a month, the NCAA is going to see its cash cow start – March Madness,” he said. “And the students won’t see a dime from March Madness. And all we’re saying is let’s be equitable and let’s be fair. Let’s let students profit off their own name, likeness and image.”

The bill would allow collegiate athletes to be paid for the use of their name and likeness and would prohibit the NCAA – the association which oversees major college athletics – from punishing students who take part in the payment or the universities they attend. It would not allow for payment of salaries by universities.

Welch said it requires any endorsement contract to be disclosed to universities and allows students to sign with agents who must be licensed with the Illinois Department of Financial and Professional Regulations.

It would take effect in 2023. The reason for the grace period is to allow for an expected legal challenge, Welch said in October.

The bill passed the House with bipartisan support in October during the fall veto session, but failed to reach a vote in the Senate. He said the chamber’s change in leadership at the time could have stalled the proposal, which is backed by Gov. JB Pritzker, but he believes “the time is right” to move it forward once again with a new Senate president installed.

Sen. Elgie Sims, a Chicago Democrat and sponsor of the bill in the Senate, was unable to take a call Friday, but his office said he “plans to continue working with his colleagues in an effort to get the bill passed this spring.”

On Friday, Welch was joined by brothers Shannon and Sterling Brown, who both grew up in suburban Maywood, graduated from the Proviso Township High School District and played basketball at Proviso East High School before entering the NBA.

Shannon Brown, the elder of the brothers, played three years at Michigan State University and went on to a nine-year NBA career that included two championship rings. Sterling plays for the Milwaukee Bucks after having played four years at Southern Methodist University in Dallas, Texas.

The elder Brown said while he considered the possibility that endorsement deals for athletes could “detour them from actually going out and pursuing their dreams and their goals,” he believes the level of sacrifice made by college athletes deserves compensation.

“I want to see them and their families thrive on the work that they put in,” he said. “I feel like enough hard work is put in that these kids should definitely be able to benefit from it in a way that is positive.”

Rep. Kambium Buckner, a Chicago Democrat who cosponsors the bill in the House, played football at the University of Illinois, went to law school and concentrated on sports and entertainment law.

“What I saw firsthand is that the window to profit from skillset and likeness is very short and finite for the majority of these women and men,” he said.

Sterling Brown agreed and said sacrifices players make for college basketball include late nights and time away from family.

“Those who got the bigger names are going to have a bigger chance to go to the NBA and fulfill their dreams financially and on the basketball side,” the younger Brown said. “And some who got big names on campus are not really going to get that shot all the time, so if they can get a little something while they’re in college and while they got that hype and that buzz around their name and everybody is buying their jersey, everybody is watching them and following them, and they can help their family, why not?”

He also said that receiving endorsements at the collegiate level could provide a valuable learning experience for college athletes, some of whom get to the NBA without any education on the “financial and business side of things.” 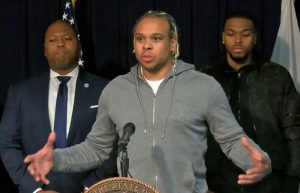 While the NCAA announced in October, just before the bill’s House passage, that the association would “start the process” of changing its rules to allow athletes to profit from their name and likeness, Welch said at the time the move was a public relations stunt and pressure from states was still necessary.

“We believe the time is right to call it into action. It’s time to put this bill on the floor, call it for a vote, and let’s get it on the governor’s desk and keep the pressure on the NCAA to do the right thing,” he said Friday.

This week, the Associated Press reported that NCAA President Mark Emmert urged the U.S. Congress to “put restrictions on college athletes’ ability to earn money from endorsements, telling a Senate committee Tuesday that federal action is needed to ‘maintain uniform standards in college sports’ amid player-friendly laws approved in California and under consideration in other states.”

The NCAA opposed the California bill, which Illinois’ legislation mirrors.

In October House debate, Rep. Anthony DeLuca, a Chicago Heights Democrat, called the bill “a dagger in the heart of amateur athletics.”

Republicans at the time also questioned how it would impact smaller schools, whether bigger name players would have an advantage and whether endorsements could be performance-based.

But Welch responded in floor debate, saying small-school athletes could pair with local businesses, entire teams could be sponsored and players’ contracts with their schools would address performance-based incentives.

He also said he was open to follow-up legislation.

PHOTO: Shannon Brown, a former NBA player who won two championships with the Los Angeles Lakers and grew up in the Chicago suburbs, gives his support to an Illinois bill that would allow college athletes to collect endorsement deals at a Chicago news conference Friday. Brown is joined by his younger brother Sterling Brown, at right, who currently plays for the NBA’s Milwaukee Bucks, and state Rep. Kambium Buckner, D-Chicago, who is a cosponsor of the bill. (Credit: blueroomstream.com)