Almost every county in the Metro East had more housing units sold compared to December 2018.

Home prices were up 7.2 percent in the State of Illinois and are up 2.2 percent for the entire Metro East, compared to December 2018. According to Illinois Realtors, prices remained in positive territory, marking eight years of continued annual gains for home prices in Illinois. St. Clair County Home prices increased over 15.7 percent, with an average price of $166,729.

“It is great to see that people were home for the holidays. The unusually warm weather we had seemed to bring out home buyers more this year than last, which is great for our area.” says Donna Baker, president of the Realtor Association of Southwestern Illinois. 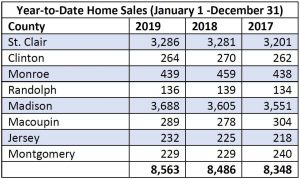